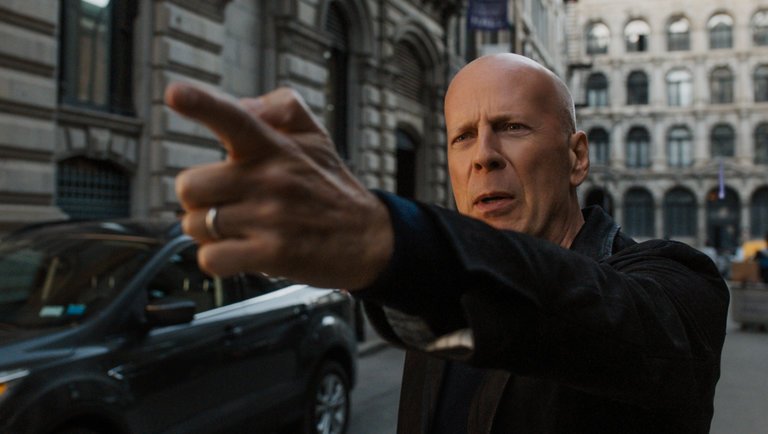 Perhaps it should have been prophetic that Eli Roth’s Death Wish remake had to be rescheduled after the Vegas shooting and is still debuting at the wrong time with the recent Florida shooting. At a time when gun control is the hot topic of debate, the gun-loving insanity of Death Wish comes with bad timing. Or, if you have a throbbing love of guns to an absurd degree, the right time. Yes, I know a film this violent and giddy shouldn’t be approached with a political bias against it, but when a film this bizarre rubs its nose in the issue without saying anything, you can’t help but get a sour taste in your mouth.

What hurts the picture is that it feels the need to rework itself for the era, venturing down too many relatable avenues. The story has shifted from New York to Chicago, considering the skyrocketing number of gun-related deaths in the city. Fitting, but the opening of multiple reports of gunshots and a bloody display of a cop biting the dust on his way into the operating room paint a very grim picture. It seems like a depressing and draining life for Paul (Bruce Willis), a surgeon that observes an endless stream of bullet wounds. But all is well when he ventures home to his loving wife and college-bound daughter. So devoted is he to keeping work separate from his home life that he doesn’t suspect anything bad will happen to his loved ones. Had he seen the original Death Wish, he would know that goons will break into his house to murder his wife and assault his daughter into a coma. Poor Paul. If only he could show more emotion past Willis’ limited ability to look lonely and distraught after the death of a loved one.

While rewriting Paul’s profession to make more sense for his opinion on crime and his journey into being a vigilante is more natural than the gritty 1974 original film, it’s made far more silly. Paul will enter a gun shop after seeing a ridiculously cheerful ad online and is greeted in the store by a buxom blonde that acts more like she is serving wings at Hooters than taking gun selling seriously. In a better film, this would be a satirical scene fit for Robocop, but this film isn’t aiming for anything that high. If anything, Roth seems to be holding back the script from breaking into some long-winded rant by the protagonists that there should be less gun laws, encouraged vigilantism, kids being kicked off smartphones, and an end to gluten-free foods. Roth stops the film from going too far, but it seems to be a struggle.

Where the film finds its groove is in Bruce Willis doing what he always does best: kill people and make a snarky remark. When Roth ventures into this territory, it’s a weird world of gore and grins, showcasing his trademark for staging torture and death most bloody. In this cartoonish realm of veins being sliced open, bullets piercing chests, and brains spilling onto the concrete, there’s a wicked sense of fun to the picture. And yet I can’t shake the distance these scenes put between campy action and serious drama. Paul’s vigilantism inspires copycat heroes, but the rise of these vigilantes being gunned down is only brought up once and never addressed. The death of Paul’s wife is tragic, but he seems to get over it quick when he has someone to shoot. And though the gun violence epidemic in Chicago is an ongoing issue, it is somehow magically resolved by the end of the picture after Paul kills the leader of murderous goons. Was the villain a mafia boss that controlled the city? Who knows. Nobody, apparently, since we don’t learn anything about him, other than his weakness is being shot at with an automatic weapon.

I do have to hand it to Roth that he has his audience of middle-aged baby boomers down pat. He loads his picture up with grizzled old-timers (Vincent D’Onforio, Dean Norris) that bark and snark at the latest generation as weird and scary. He holds guns high up on a mantle of being the savior of the street violence problem, going so far as to make Paul’s crusade seem giddier than grounded. And the soundtrack boasts plenty of classic rock to stir up memories of younger days. Honestly, this would have been fine had the film not desired to make some point about the current state of the gun debate, only to shout for a moment before retreating back into its benighted hole of comical kills. Believe me, I wanted to love this film for holding on the rape, writing a more believable development of the hero, and even paying tribute to a handful of Death Wish movies with subtle callbacks. But in trying to be both dramatic with death and comedic with violence, Death Wish is aiming at two different targets and never lands a bullseye.