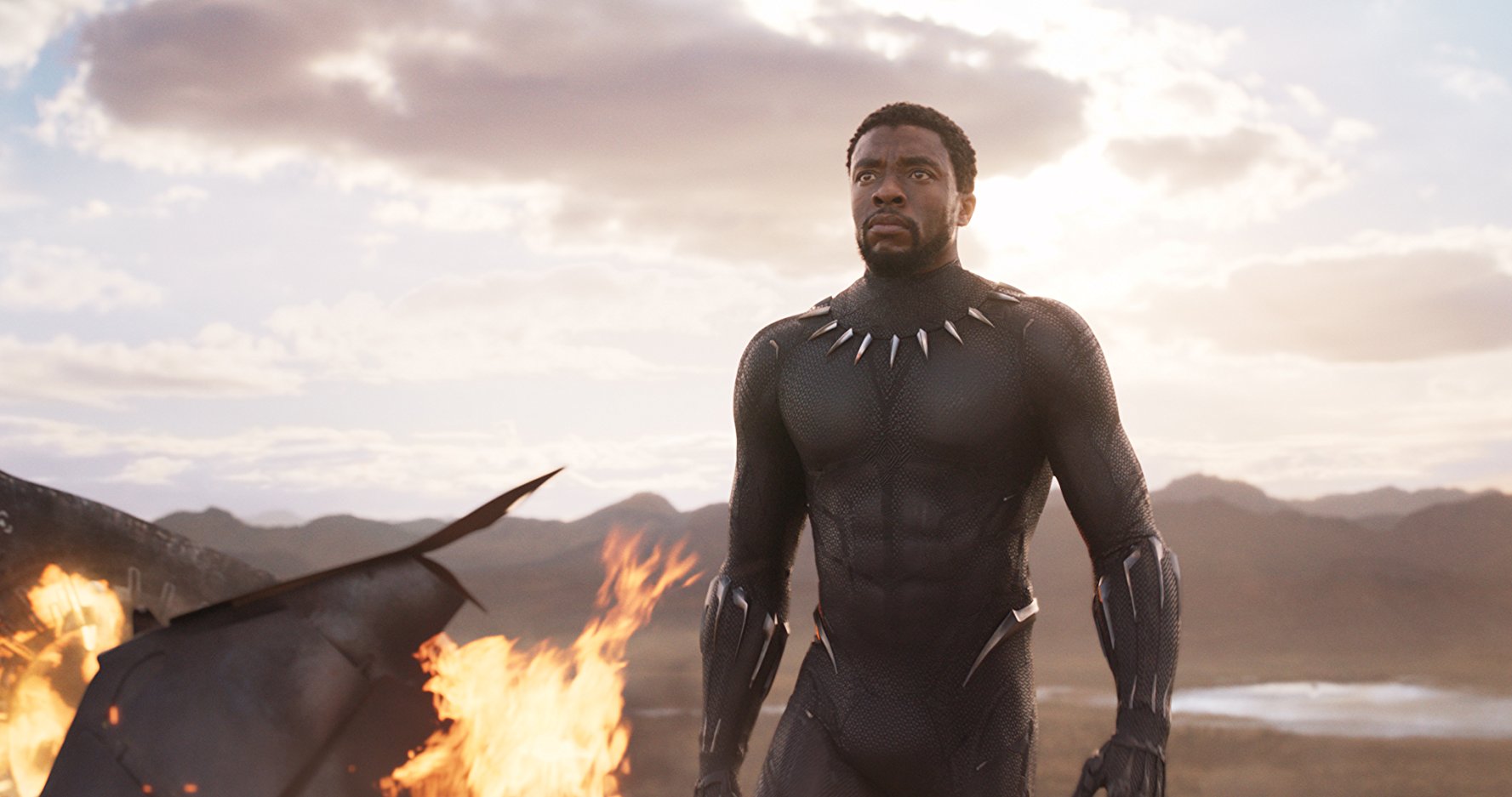 There is a lot of pressure in the tsunami of cinematic superheroes to make something that will stand out from the crowd, but Ryan Coogler is more than up to the challenge with Black Panther. He doesn’t merely give the hero first introduced in Captain America: Civil War a standard solo film to showcase his powers, world, and rogues gallery. Coogler loads his picture up with a unique style, purpose, and, yes, even politics, to create one of Marvel Studio’s best films and not just a bridge to Avengers: Infinity War.

With Wakanda’s king killed during the events in Civil War, it’s up to T’Challa (Chadwick Boseman) to pull double duty as the new king and the Black Panther hero. But it’s not such a simple transition, nor is Wakanda as barren as it may appear. Similar to Wonder Woman’s hidden island of Amazons, Wakanda masks a futuristic city from the rest of the world. The true Wakanda is a thriving metropolis of ancient traditions and technology that supervillains would salivate over. So there’s a lot of pressure on T’Challa’s shoulders. He has to prove himself as a warrior worthy of leading Wakanda, besting any warrior that dare challenge him in a classic one-on-one challenge of strength. He has to deal with the evil Klaue (Andy Serkis), a cackling weapons dealer that has a fever for that sweet Vibranium material that is the lifeblood of Wakanda. There’s also the issue of deciding where Wakanda belongs in the world and how much help they should provide the outside world. That’s a lot for one king to handle, but there are even more messy issues with his family’s legacy and the diplomacy around Wakanda’s tribes that creates a stirring drama of kingdoms, honor, and betrayal.

The Marvel movies tend to have a problem with formulaic villains, but not this time. The assassin Erik Stevens (Michael B. Jordan), or Killmonger if you must need a supervillain title, wants to infiltrate and become the new king of Wakanda. Yes, he essentially wants to rule the world, but with a relatable pathos that makes his scheme more interesting. Stevens makes some good points about Wakanda shutting itself off from the world when the culture’s technology could have been saving lives. T’Challa agrees with some of these points but is naturally not keen on Stevens’ desires for waging war with the world that wronged him, despite a few Wakandans agreeing with him.

There’s enough faith in this material that Coogler dives face-first into Black Panther’s world and embraces all its lore and theatrics with more refinement than winking. His approach to the royal drama is treated with the grace and stern of a Shakespearean tale, never afraid to keep the dialogue strict and the music somberly epic. The film has ample opportunity with the Wakandan technology expert Shuri (Letitia Wright) and the tag-along CIA agent Everett Ross (Martin Freeman) to go overboard with jokes but they never stray off course into the easy territory. Both are chipper and bring some levity to the drama but no more than necessary. There’s also not very much mugging with T’Challa’s support of woman warriors, his current lover Okoye (Danai Gurira) and former lover Nakia (Lupita Nyong’o). There’s no need for them to grin at the camera with an “oh yes” muttering when they brandish Vibranium spears, discs, and power gloves. They’re not snarky ladies taking charge but dedicated soldiers of Wakanda that serve with more honor than the men they face.

As with the best of Marvel movies, Black Panther has its own unique world and style, distinctly different from the usual crop of superhero films. The look of Wakanda is one of the most astounding of fantastical settings, mixing the beauty of African culture with the wonder of advanced technology in spaceships, structures, and weapons. T’Challa can easily go from exiting a starship with his fancy suit of James Bond devices to fighting shirtless cliffside for his honor. Every aspect of his world is amazing, from the glowing garden that grants the powers of the Black Panther to the ritual of communicating with ancestors in a dimensional plain. No room feels like a simplistic depiction of a sci-fi environment, the most astounding being Shuri’s lab that looks like a trippy modern art museum with its winding platforms and colorful displays on the walls.

The story becomes so engrossing that the action feels almost secondary to the film’s true appeal. That being said, Coogler doesn’t disappoint. There’s a rousing clash in a Korean gambling parlor, a thrilling car chase with Black Panther leaping between vehicles, and a large-scale field battle of electric shields and armored rhinos. The powers of the Black Panther are also pretty cool, his suit equipped with kinetic absorption, allowing his outfit to take a beating and then blast a burst of energy. As well-assembled as these scenes look, it’s ultimately T’Challa’s suitless battles for claiming his right as king that were more exciting. Sure, the lack of computer graphics makes the action more believable, but it’s the staging that really makes the story of T’Challa come alive rather than just being another pretty display of general destruction.

And, yes, the story does become political and racial but it’s not out of place for a story of kingdoms, colonialism, and Wakanda’s place on the international stage. Coogler doesn’t shy away from this aspect and doesn’t go easy on it either. Having grown up in Oakland and losing his father at an early age to violence, Erik Stevens has strong feelings about more or less wanting to strike out at what led to these events. He believes Wakanda has wronged the black community by not being open and that had they been involved, things would be much different. By the time T’Challa decides to finally use his resources for a more profound effect on the world and black communities, it’s a move that comes from a contemplative and emotional place. And in a world with evil aliens, sorcerers, weapons dealers, and robots, there could stand to be more hope for humanity than the biggest guns to blow up the biggest baddies.

Black Panther is exciting and involving for feeling both fresh with style and classic with the story. T’Challa’s sordid family history is treated with a grandiose of a legendary mythology of kings and queens, royalty and barbarians, honor and death. His character is such a complex figure of swirling confliction that he’ll have to figure out more than just a means of besting the villain, contemplating the true fate of Wakanda as he fights Killmonger on a slick Vibranium train track. It’s these intricate details and the commitment to the story that makes Coogler’s Black Panther more than just an accomplishment of a black superhero film. Much like the soundtrack that weaves R&B with a grand theatrical score, it’s a seamless marriage of black culture style with classic Shakespearean storytelling, making for one of Marvel’s most distinct and powerful of superhero movies.