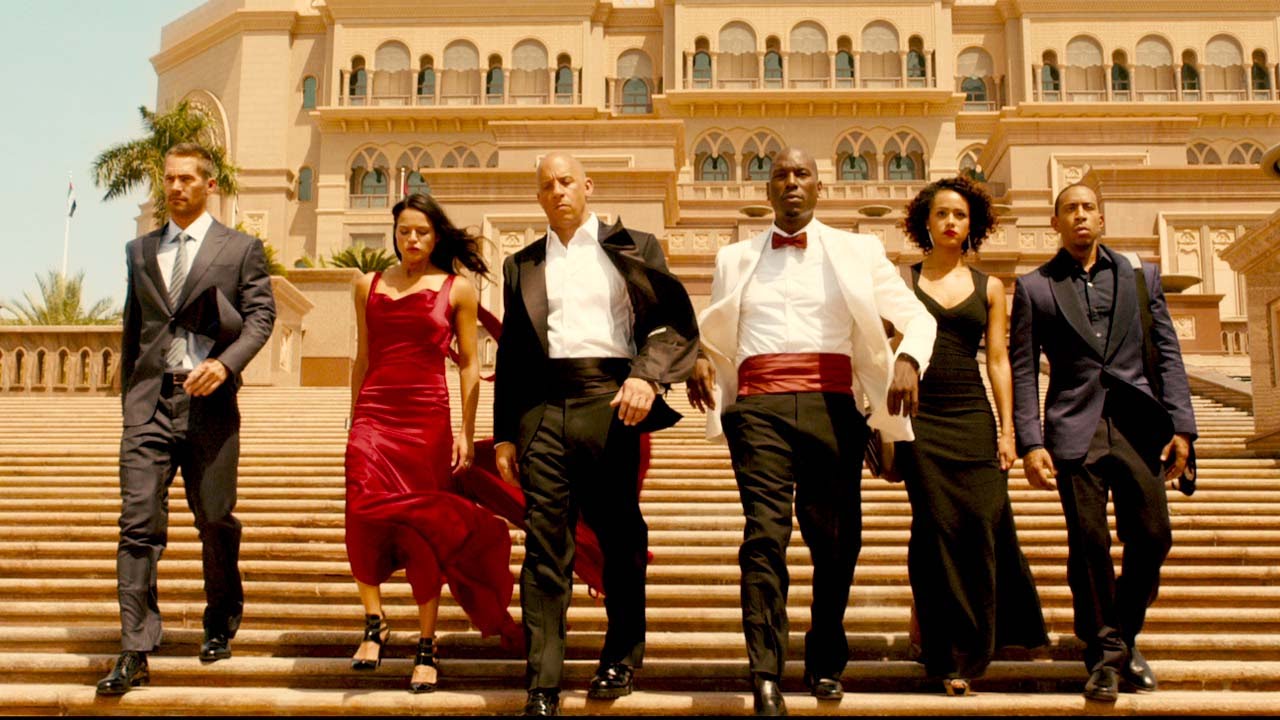 The Fast and the Furious franchise of movies are long past the era of street racing. It’s even past being called Fast and Furious. Nobody has time for that title – it’s too slow! Now boiled down to the title of Furious 7, the series has reached a level of insane action and likable charm that never fails to crack a smile or widen the eyes. We are long past pointing out that these are street racers performing feats more on par with James Bond than Bullit. The previous movie featured a tank being stopped with wires, a mid-air rescue by slamming into a car and a giant cargo plane crashing into the ground. How could the new director James Wan possibly outdo that craziness limit set by Justin Lin? Believe it or not, Wan – the man behind Saw and Insidious – found a way to keep the ridiculous thrills steady and charming.

It’s a combination of both a likable cast and insanely fun stunts that continues to make these movies so much fun. There’s just enough story and character given to the misfit group of international street racers turned special agents. For all the grit and muscle, there’s a heart to Dominic Toretto (Vin Diesel) in how he fears for the lives of crew. When a rogue special agent (Jason Statham) starts targeting the racers on a mission of revenge, Toretto takes the matter very seriously keeping families out of it. He’s aware of his best pal Brian (the late Paul Walker) trying to settle down with his wife and son. So before Toretto and company go blazing towards the opposition on all cylinders, they make sure everyone is safe and that those who want in on the mission realize what they’re getting into.

There’s enough for everybody to do and not a single actor in this rather large ensemble feels wasted. Even Dwayne Johnson, reduced to a hospital bed for the majority of the picture, still manages to munch on the scenery. He only appears in three scenes and still manages to steal the movie. For a good chunk of the movie, the crew gets their orders from a special agent played by Kurt Russel who gets an equally big opportunity to strut his Russel-isms. He all but winks at the camera in the way he has more fun in this movie than anyone. All the familiars fit perfectly as well with just enough moments to shine from Tyrese Gibson to Michelle Rodriguez. Even the late Paul Walker, who I expected to be downplayed or written off for his death during production, still plays a key role and is given an affectionate sendoff.

Ultimately, though, it’s the insane car stunts that keep the blood flowing in this series. And at this point the name of the game seems to be finding new ways to keep the cars off the ground as much as possible. The grandest of stunts involves our heroes being dropped from a cargo plane in parachuting cars. But if watching all the cars land safely from such a plunge isn’t crazy enough, there’s a ridiculously absurd scene where Diesel and Walker drive a car through the windows of not one, but two skyscrapers in Dubai. And just in case logic wasn’t completely thrown out the window, Diesel and Statham both smash their cars head-on into each other and walk away unscathed. All these sequences are so over-the-top where it appears as though the finale is just a blur of cars, guns, explosions, debris and fire. I swear there’s a moment in this movie where you could easily confuse it with G.I. Joe: Retaliation.

While Furious 7 is loud and dumb, it’s a playful picture that’s aware of its silly nature and lets us in on the fun once more. It’s impossible not to stare in awe at the over-the-top stunts or crack a smile at the solid cast with real chemistry. The death of Paul Walker does little to dampen the tone of the picture – especially when you consider the comradery of all the characters and tribute ending attached. His death also does little to discourage the series in how it seems to boast that there is plenty of gas left in the tank for another round. By the end of the picture, I felt both thoroughly entertained with popcorn-chomping stunts and touched by the final performance of a beloved cast member. And if a picture that features cars flying out of planes can make me feel something I wouldn’t expect that’s the sign of a strong movie considering it’s already getting by on just being crazy, stupid fun.