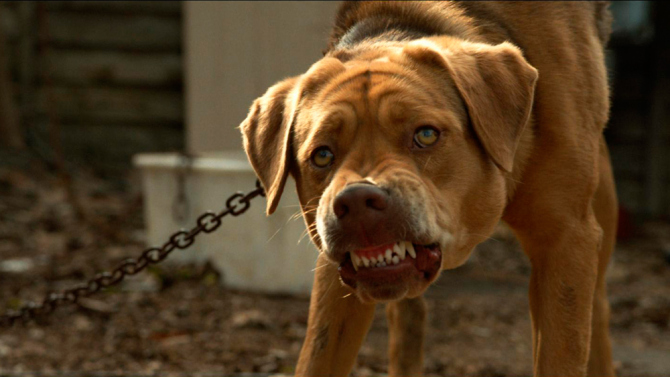 White God is the dog movie I’ve been waiting for – namely one that doesn’t feature a pup saving Christmas or solving a crime. The direct-to-video market has seen a glut of these dog-sploitation movies that anything divergent is more than welcome. Finally, there is a film where the dog isn’t just a furry ornament or an easy target for sympathy. It’s probably the first film I’ve seen in a long time where the dog is actually a character with a real arc. And, thankfully, it’s a solid bit of grit worth the massive effort it must have taken to coordinate these scenes of dogs building character.

This little town in Hungary seems entirely against the forces of preteen Lili and her dog Hagen. Sent to live with her bitter estranged father and working with a harsh orchestra conductor, Lili’s only true friend is her dog. The two have such kinship that only Lili’s skill with the trumpet can satiate Hagen’s whining and barking. But when their relationship starts annoying her elders, Hagen is dumped on the street by the enraged father, leaving the dog to fend for himself and find his way back.

From that description, you might expect this to be your run-of-the-mill story about a dog on an adventure for his young master. But Hagen’s journey is one that is incredibly dark in a world where the people of Hungary seem to despise any and all dogs. This tone is established early as the first dog Hagen spots while on his own is a canine corpse – rotting in a heap of garbage. These are cruel streets filled with sneering dog catchers eager to exterminate and seedy men devoted to training dogs for bloody sport. Of course, Hagen will find an escape from these fatal traps, but not after being bruised and beaten. The trainer that buys him off the street beats Hagen until he is a snarling beast ready to tear out the throats of his enemies. You don’t exactly come out of a fight to the death as the same old playful pup.

By the second act, White God turns into a dog revenge film. Hagen slowly grows irritable and fed up with humanity that would rather carve him up than give him a pet. He leads a horde of dogs into the streets to savagely attack and murder all who wronged him. Such shots may sound silly the way it resembles a dog-version of Planet of the Apes, but it’s treated sincerely with believable drama and tension. There is a sense of control and character to this madness as when Hagen pulls back his forces when a blockade of police begin opening fire.

But the movie isn’t all dog as we get to follow Lili on a similar adventure of understanding humanity’s cruelty. Without her dog, Lili struggles to find something to latch on to in life. She checks the dog shelters, but they’re absolutely no help. She reluctantly throws herself back into music, but finds herself hating its soulless heart. She tries to make friends at a party, but her drinking and drug holding only land her in hot water. While she doesn’t delve as deep into the abyss as Hagen, she still makes a tough transition that we hope she’ll make it out of. And, of course, we want to see the girl reunited with her dog, but they may not be the same personalities they once knew before.

White God is white-hot with grit and style for a tale of a girl and her dog. Writer/director Kornél Mundruczó shot this Hungarian town with a keen eye for great shots as when all the dogs stop a few feet from Lili as Hagen approaches her alone. I rarely ever write this in a review, but the dogs really deserve some credit for adding real emotion in roles that are usually reduced to blank faces of cute. In fact, there was an award they won in the form of the Palm Dog Award. Yes, this is a real award and no film is more worthy of such an honor than this one right here. It’s about time dogs were given some real roles as opposed to just phoning it in as another cuddly face for the screen. I’m semi-joking, but I really am tired of these Christmas and cop dog movies that something like White God deserves more credit for creating a real story and not a cheap one. It works as a coming-of-age picture and a dog revenge picture. A strange combo, I know, but it makes it all the more entertaining that such a mixture warrants a great film.