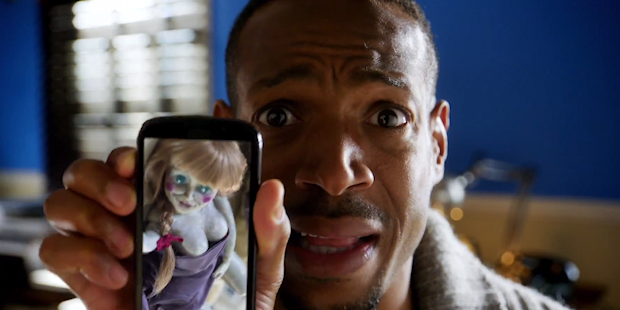 ‘A Haunted House 2’ is the biggest middle finger of a sequel I’ve ever seen. It refuses to take any new chances, try out new material or even write something different. The term rehash would be too kind in describing this “horror satire” which struggles more than any other film of this sub-genre for a laugh.

Marlon Wayans returns as the overly-talkative protagonist once again thrown into a creepy house where haunted hijinks ensue. The plot plays out as a direct sequel with his character dumping his previous love interest for a new white wife. I mention she’s white because his character will not shut up about how taboo it is to have an interracial relationship. Even though she tries to reassure him that it’s not a huge deal in the 21st century, he keeps harping on it. Here is a perfect opportunity missed for comedy as Wayans could’ve been seen as a backwards man alone in his misconceptions of the world he bases on stereotypes. Sadly, he is entirely justified by the usual tired and often racist depictions of different races in this picture.

The horror parodies are nothing all that special. There’s a running satire of the plot from 2012’s ‘Sinister’ with the killer from that film failing at his murders and getting assaulted by his victims. It’s mildly amusing as a sort of revenge against horror films, but then again this is nothing new for the sub-genre. The longest running joke involves the creepy doll from ‘The Conjuring’ which Wayans has a strange love affair with. This is a film where for five minutes we watch Wayans go off on an inanimate object and have sexual relations with. I never once cracked a smile during these scenes as they just never seemed to end despite the quick-cut editing style. That’s an even creepier thought to imagine there is more footage of Wayans making out with a wooden doll. This is the cry of someone who desperately needs a writer since he clearly can’t handle improv comedy.

The cherry on the top of this awful mess is the heavy racism. Wayans has written an extremely backwards world where Mexicans are gardeners, white people refuse to even acknowledge black people and African Americans are depicted either as gangsters or drug abusers. Needless to say, this is not biting or challenging comedy. Most of the film just seems to be improv from Marlon Wayans flopping around set with his loud and often annoying mannerism. The result is a film that is unfunny, tired, offensive and just not an enjoyable experience making it one of the worst films of 2014 by far.