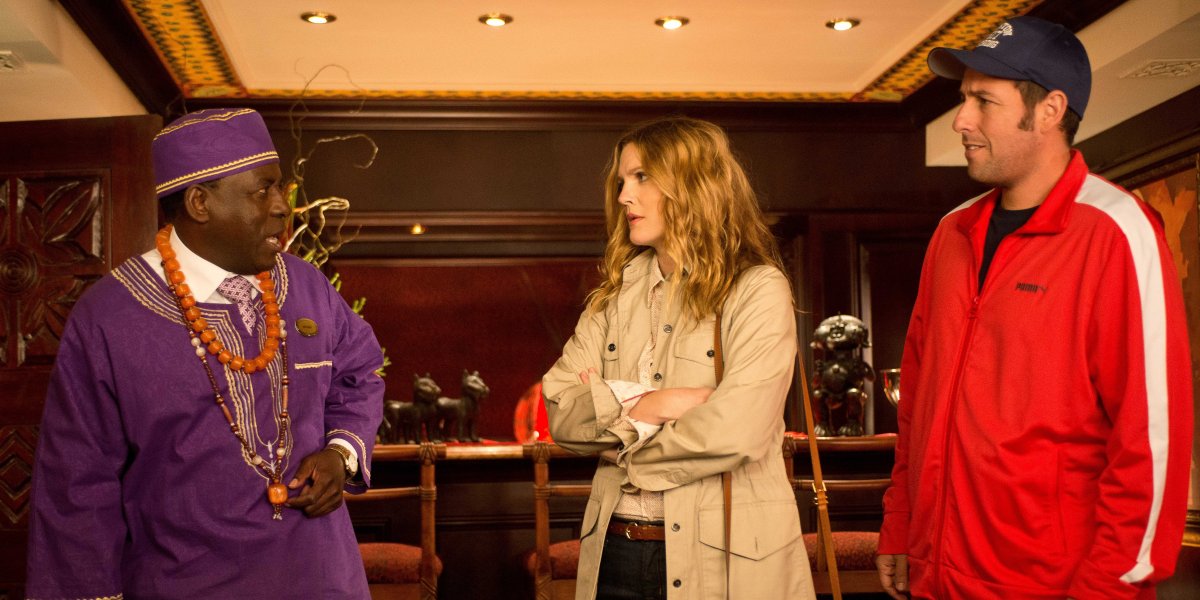 Adam Sandler’s new romantic comedy Blended is a cliché and formulaic romp with that touch of Sandler’s juvenile wit. To his credit, this film isn’t anywhere near as offensive as his earlier works like That’s My Boy, but that’s hardly a glowing recommendation. I guess I’m just pleased that there was nothing heavily racist, sexist or foul this time around. That still doesn’t excuse the tired comedy and sitcom level writing for this feature film.

Sandler and Drew Barrymore both play single parents with multiple kids who are somehow able to have such easy jobs as being a closet designer and working at Dick’s Sporting Goods. I’d love to know which retail position there allows you to afford such a large house. Not only do they apparently have enough to support their families, but apparently enough to whisk themselves away to an African vacation for seemingly no reason! But they just happen to end up together at a couples themed family resort where the reluctant parties have to share a romantic suite. Thus begins their African adventure where Sandler and Barrymore learn to connect with the kids and each other through some painfully written resort activities intended to be romantic.

Blended was actually shot in Africa in which we are treated to some beautiful locations, but the movie fails to take full advantage of that. Why would go to all the trouble of filming in Africa with real animals when the film resorts to computer generated monkeys to play musical instruments. Come to think of it why would you even want to have computer generated monkeys playing music in the first place? I guess it’s just a-typical of Sandler’s blend with his trademark sight gags and verbal wordplay. And of course it just wouldn’t be a Sandler film without some potty jokes.

Sandler and Barrymore are decent as the cute couple we know that will end up together, but the rest of the characters are all gimmicks and cartoon characters. The kids are okay actors, but they only really serve one purpose to push to the two leads together and then just sort of disappear. Several of Sandler’s usual troupe of actors pop up as well for some moments of awkward and ineffectual bits. Terry Crews keeps popping up as the singing narrator that everybody can see and hear. The first two times it happens is mildly amusing. The fifth time it happens is tedious. After all these attempts at making the film funny, ‘Blended’ tries to turn itself around by making the relationship more emotional for the kids. But since it doesn’t play this card until the third act, you feel nothing for this new development so late in the game.

What perplexes me most about this movie is just who is its target audience. It’s far too childish for a romantic comedy and too adult to be a family comedy. I can only assume that it was intended for young adults and college kids to see on a date night. But, I don’t know, I’d like to think that those audiences are smart enough to know that this film is bland, tired and not challenging or entertaining enough for what they want out of a movie. It’s not the worst film Sandler has ever made, but it’s far, far, far, far far away from being a film I’d want to come back to again.