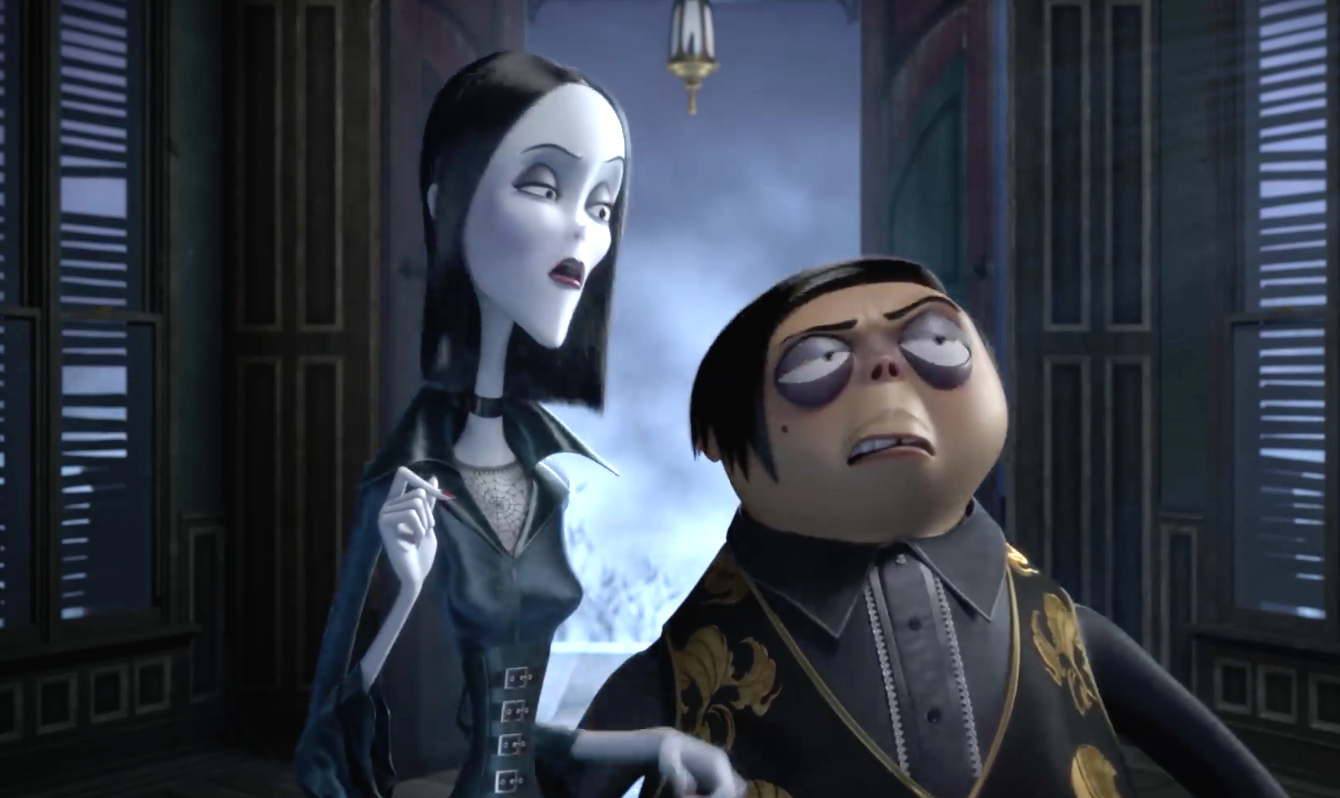 The Addams Family is a premise that seems as though it’d be perfect for animation. A comically creepy family living in a haunted house with all manner of monsters lurking about would be suited well for a medium where anything is possible. But when mired in the current framework of Universal’s formula for kid-targeted animation, the same bite of the live-action show and movies is just not present. For a family that was all about being different and weird, this latest iteration of The Addams Family falls more in line with the current crop of animated farces than ever feeling like it has a bite to be anything more than Addams Family Lite.

Consider how underwhelming the reveal is of the origins of the immediate family in the Addams line. The film begins with the marriage of Gomez and Morticia, cut short by angry villagers running them out of town. Hardly five minutes into the film and we already have a manic scene of slapstick feuding. Seeking refuge, the couple aims to hide themselves away in a mountain top estate in New Jersey. Everything just sort of falls into place from that point; they’ll stumble upon their butler Lurch and have two children, Wednesday and Pugsly. Before you know it, they’re snapping their fingers to the familiar theme song.

Much like the previous Addams Family movies, the entire first act is reserved for gags and puns. We get to see Wednesday’s dead-pan manner when handling a crossbow and Pugsly’s penchant for manically using explosives. We see the bickering in music tastes between Lurch and Thing over a harpsichord, though this is mostly an easy excuse for inserting all the pop culture tracks into the picture. We get some of that romance between Gomez and Morticia but not as much as before. Remember, this is a kids’ movie Universal is trying to weave and they probably don’t want as much sex. This means that in a scene where Gomez is kissing Morticia’s arm and saying she feels like a cold fish, he’s literally kissing a cold fish. Why is the cold fish there? Beats me; all that matters is there’s no extra level of kink in the scene.

There is a story to this picture although one we’ve heard before and told better. Below the mountain of the Addams, home is the not-so-subtle suburb of Assimilation. The town is more or less under the control of Margaux Needler (Allison Janney), a HGTV style reality show host. With her big hair and big mouth, she prides herself on being the covert gossip queen of the community. So when Margaux notices the Addams and their divergent home, it doesn’t take a genius to guess she’ll try to run them out of town.

Along with Margaux’s strive to cause division in her town, Wednesday discovers the local school and starts to favor a more divergent lifestyle. She shocks her mother by coming home with a pink hair clip and later singing a peppy song while doing a dance. So the Addams have their own flaws as well which at least offers up an interesting introspection. This is also present in Puglsy’s tale of being nervous in completing the Addams ritual equal of Jewish tradition, where he must perform a dance with a sword. There are shades of previous Addams Family movies present but mostly hand-cuffed and simplified, the point where Pugsly is wielding a rubber practice sword. Would Gomez really be that easy with his son when it came to swordplay?

This version of the Addams Family feels milder than previous versions. All the elements are there and the characters certainly feel like they’re in their element. Few actors break out in their roles, though Nick Kroll does come close in the role of Uncle Fester for bringing his own range of vocal slather. Some gags had me smiling, as with a chalk outline of a dead body with guts and Gomez favoring coffee grounds as a snack. But a few grins does little to offset a picture where the animation feels a little too generic in a story that ends on a brighter note than a darkly comedic one.