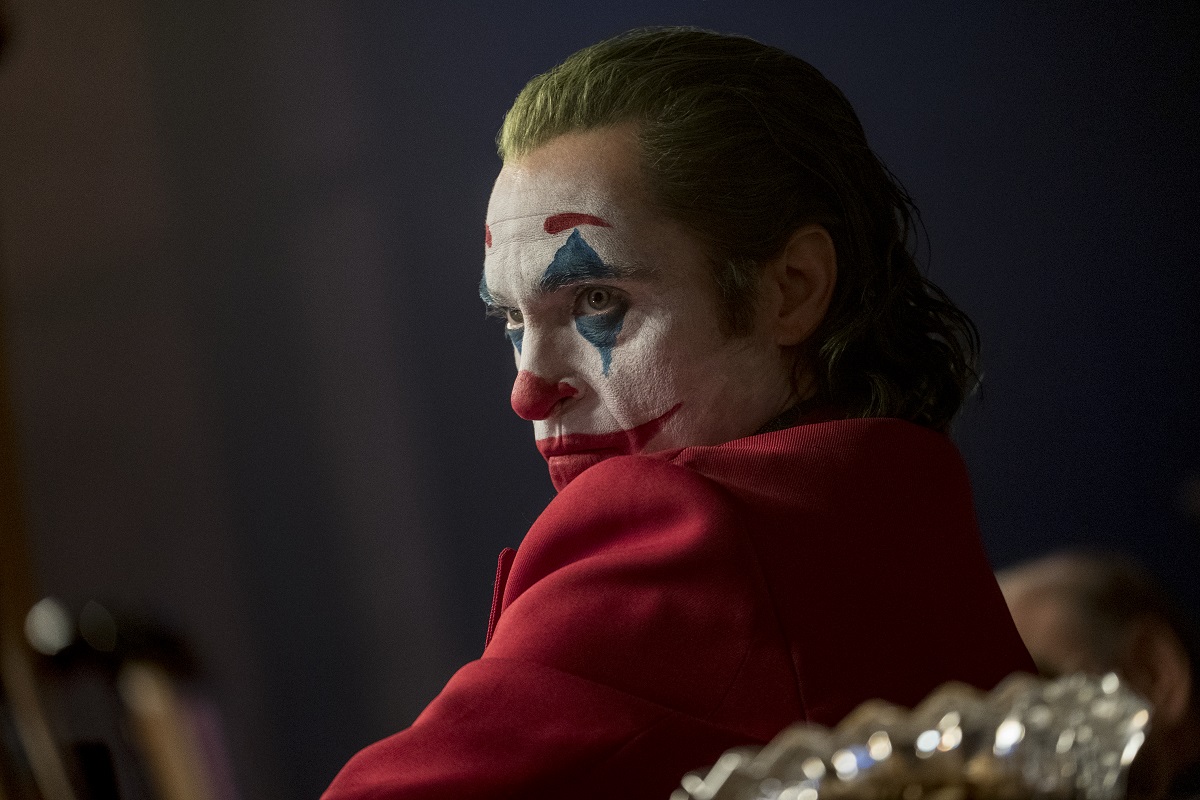 Given the competition, I could easily see someone praising the surface-level sophistication of something like Joker greatly distancing itself from the current crop of comic book films. There’s no quippy superhero to save the day, no routine villain scheme of taking over Gotham and no anti-hero bent where our antagonist centerpiece has to remind us he is the bad guy. It’s a bleak, depressing and horrific world of unrelenting cruelty. Many balls are juggled of questioning capitalism, the lack of help for mental illness, the sins of the father and societal lack of sympathy that broods distrust and hate. Sadly, the film mostly just stews in its grim world and never really takes us anywhere we don’t already know this road leads towards.

The film places us in a tough spot of trying to comprehend Arthur Fleck (Joaquin Phoenix), the man who will become the Joker in this picture. He has a mental illness where he can’t stop laughing, causing much difficulty in being around others. His daytime job is that of a clown, seemingly like a decent profession where he doesn’t have to constantly hand out cards to let others know about his condition. He’ll still be beaten in the streets for dressing up as a clown in the first place because that’s how Gotham City functions.

By night, Arthur retreats to his apartment with his aged mother to watch their favorite evening TV programs. Their favorite talk show is hosted by Murray Franklin (Robert De Niro), a show that Arthur hopes to appear on one day. There’s a hope in Arthur’s mind that he’ll be a successful enough comedian to make it onto the show as a guest. This vision exists as a fantasy within his head as the rest of the world is against him. His mental health caseworker is cold and eventually forced to resign. His medication will run out. He’ll be fired from work. The class structure will rail against him. Arthur’s mother has some hope that her former employer of Thomas Wayne will eventually come to their aid. This will never happen for a terrible secret that is revealed, further shattering Arthur’s perception of the world.

This is a lot for a villain origin story to take in and not much of it gels at all. The film quite literally dances around these topics with an uneasy non-commentary that becomes lost in its classic rock soundtrack. This is especially off-putting when it becomes pretty clear the film isn’t going to fully explore these topics. It merely uses them as dressing for Joaquin Phoenix to showcase how well he can force himself through the mind-shredding Joker acting school. And, yes, he does rather well in this role, existing as a troubled and tortured soul within a gangly body. His anguish and distress are always present on the screen to create a fantastic performance like no other actor could deliver.

The transformation into the Joker is a troubling one as it just sort of seems to happen as the bullied clown turns into the narcissist killer. He breeds a sense of entitlement in how aloof he is with his intentions, merely feeling like the world has wrong him and that he must meld into the toxic landscape. The people that beat up Arthur in the street do so for no reason and so Arthur kills for no reason. He’s entirely ambivalent to his greater sense of his actions and lives in the current craze of his crumbling life that has lost meaning. Consider how at one point when appearing in Joker makeup he is asked if he is making a political statement with his makeup. He states that it isn’t and that he doesn’t believe in anything, even though that second part of his statement is itself a political statement. He’ll also proceed to go off on a rant about the nature of subjectivity within society norms of health and humor. There might’ve been something to this talk but since the film is running out of time for this third-act scene, we’re only treated to a cringy rant on society before Arthur fully transforms into the Joker.

This film is overflowing with mixed messages. One looming threat to Arthur’s life is the corrupt class structure. His actions of murdering three wealthy businessmen prompt a civil war in Gotham City, where newspapers literally run the headline “f**k the rich” (that’s some newspaper). So there’s an anti-capitalist leaning. But is there? Joker’s kills all lead up to anarchy in the streets where he is revered while rioting and violence only breed more terror and sadness. So perhaps the film is pro-capitalist from this portrayal of the only answer to the corrupt system is to burn it down, even though that won’t happen in this picture. After all, if the system doesn’t remain, how will Batman be able to buy all those cool gadgets to fight the Joker in future films?

The most troubling aspect is that the lack of empathy within its commentary is given a mere shrug for refusing to divulge. This is somewhat distressing in the final scene where Joker hand-waves at the quirks of his comedy and the world around him. When asked why he thinks such dark aspects of Gotham are funny, he merely mutters “you wouldn’t understand.” This leaves the film on a rather sour note where an aloofness in trying to pin down its tragic subject comes off more like a pointless scoff for the future. After the film, I had a stirring conversation about the film’s dour approach to societal woes but mostly out of interest for what the film seems to lack in observing.

From an observation of chaos, Joker never dials back on its central character being a villain. He’s cold, unhinged and is riddled with pathos. We feel for him but only for a few scenes before he descends into the Joker we mostly know. By the time the character makes this transformation, he tells tacky jokes about killing people and states there’s no punchline. The film functions the same way, never delivering anything past an eerie acknowledgment of how messed up the world is. Gotham City starts off bad at the beginning of the picture and it’s far worse by the end. What does it all mean for Joker and the city’s future? Damned if the film knows.

I wish I could love this film more for how divergent it aims to be in tackling tougher topics rarely seen in this subgenre. But I just can’t give a cookie to the comic book film that finally addressed the topic of class structure. Other comic book films wouldn’t touch this topic with a ten-foot pole but if you want to dabble in this level of drama, merely touching it doesn’t mean much.