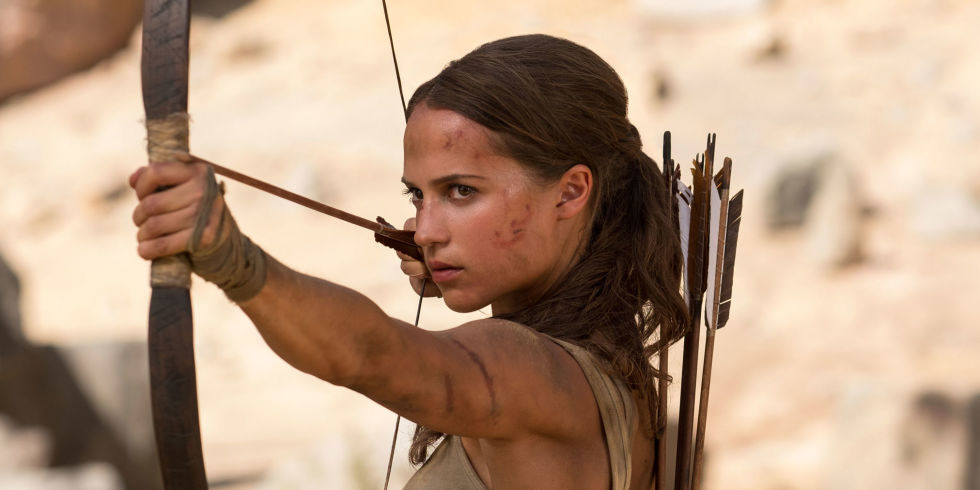 If the previous Tomb Raider films were ridiculous renditions of a sexy James Bond heroine blazing her way through an Indiana Jones plot, this reboot is a gritty female action picture trapped inside a been-there-raided-that treasure hunting story. It does away with all the silly gadgets, skimpy outfits, and ludicrous setpieces to present a film that turns Lara Croft into a female cross of Rambo and John McClain. It even plays it safe by replicating the most recent and gritty video game. If only the writers and director had the foresight to recognize that treasure hunting movies are goofy and not take Tomb Raider so seriously that it turns into the very corny film it was trying to avoid.

Alicia Vikander now plays a more ruthless and human Lara Croft, built to throw punches and take them with a grunt. She’s a reckless woman that is more content with boxing at the gym and struggling for money than accepting that her millionaire father is dead. Dear old dad (Dominic West) went missing when Lara was a child and she’s so hesitant to believe his passing that she even denies the hefty inheritance. She could accept the money and launch a worldwide search, but as Lara continually uses as an excuse for nearly all her actions, that’s not the Croft way. Through a series of puzzles and hidden rooms, Lara discovers that her father was secretly seeking the Japanese myth of Himiko, a woman that brought death to all she touched. That’d be a perfect time to cash in, buy a helicopter, and find this mysterious island where dad went missing, but the apparent Croft way is to sell your precious keepsake to make some money and hire a drunk sea captain (Daniel Wu).

Tomb Raider goes through the typical motions of most treasure hunting films but bypasses so much of what makes them fun. Lara’s journey to the island is nothing all that special, revealed through a series of Riddler style clues and repeated exposition. Don’t worry if you missed the opening Dominic West narration about Himiko’s lore; you’ll hear it at least two more times to foreshadow the titular tomb to be raided. The villain could have been the highest point in the film with a crazy Walton Goggins, but he’s such a bore. Despite the movie being two hours, this plot doesn’t have the time to showcase his character’s insanity. You’ll just have to take his word for it. And when the film finally gets to that tomb, it’s such a generic design of corpses and floor-activated traps it wouldn’t surprise me if it was borrowed from another treasure hunting movie or a theme park attraction.

What hurts the film so much is how committed the film is to transforming Vikander into an action hero in an adventure film. She’s thrown into a number of gritty scenes where she takes a tumble into a river, bounces around a descending plane, and painfully pulls a shard of glass out of her side. This film gets rather brutal at times, as in one scene where she has to kill one of Goggins’ goons in the mud with grunts of fury. As standalone scenes, they’re great showcases of Vikander’s vigor to commit herself to getting down and dirty with violent stunts. And yet there’s always that depressing reminder that the film is passively leading up to a tomb with a MacGuffin, believing too much in its melodrama and female empowerment to add an ounce of fun.

Not only does Tomb Raider further prove the hex of video games being adapted into movies, but that films with treasures buried in tombs shouldn’t be approached with a safety of seriousness. It sidesteps so many tropes that the characters become dull; Dominic West only shows the emotion of crazy when finally reunited with his daughter and Daniel Wu is built as a potential love interest with pathos that is quickly kicked to the curb because Lara doesn’t need any man to help her or fall in love with. More attention seems to have been paid to replicating the action and puzzles of the video games, right down to the cryptic spinning of rims and matching of colors to open tomb doors. If anything, this reboot only reinforces my guilty pleasures of Angelina Jolie’s depiction, lifting even more guilt for appreciating the goofiness of Lara fighting a robot. That’s not to say Vikander couldn’t kick some robot butt just as well. Hell, I know she can with her fighting expertise in this film. She just needs a better film to showcase her punches and kicks where she’s not stumbling through a melodramatic father-daughter arc, a forgettable villain, and a tired tomb of tedious traps.