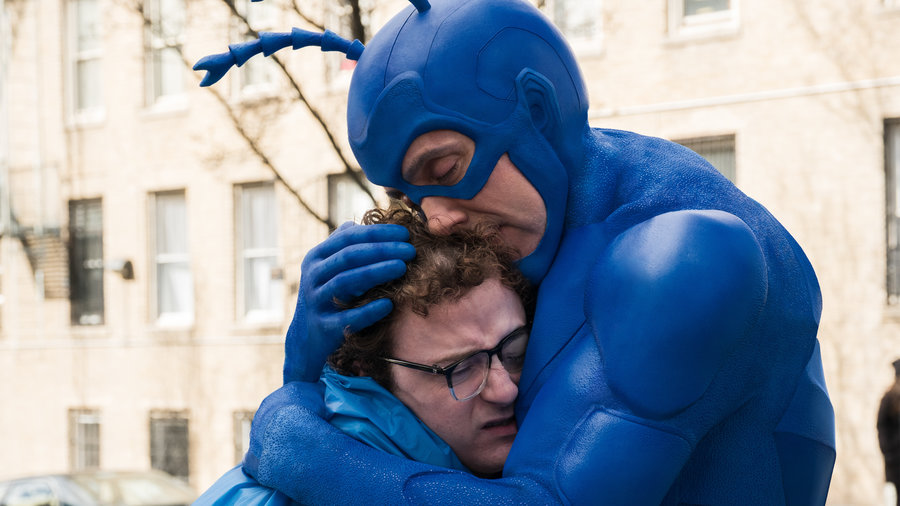 As the third attempt at adapting Ben Edmund’s cult classic comic book for the small screen, Amazon Studio’s take on The Tick is perhaps the most liberating. Unshackled from the binds of network television, the superhero show can venture into any territory it feels free; from dark pathos to bloody action, to more blatant adult situations. It’s this freedom that gives the latest interpretation of the big blue hero’s world a plethora of potential, even if it has yet to fully tap all it’s worth.

Though there are a handful of changes from the comics and previous TV series, the titular Tick remains the same old loveable goof. Peter Serafinowicz plays the muscle-bound hero with a childlike mind and a mature vocabulary, as though a comic book were slapped with a thesaurus. He doesn’t know his true identity or where he came from; a mystery that has always been present. We do know where his reluctant sidekick came from. Arthur (Griffin Newman) grew up in a town of heroes where he watched his father murdered at the hands of the supervillain, The Terror (Jackie Earle Haley). His inevitable tumble into the role of his moth superhero suit makes a little more sense when he unwittingly is saddled with the suit after running into some unlawful fellows. While this discovery makes him the target of villains, it also draws the attention of The Tick and his heroic ramblings about destiny choosing Arthur. As far as bringing this odd couple together, this serialized story is easily the most natural, making the entire season have more of a drive than just weird superhero situations for Arthur and The Tick to get caught up in saving the day.

The world of The Tick is naturally populated with some bizarre characters are given a surprising amount of dimension. The appropriately named Overkill (Scott Speiser) acts as a Punisher-style anti-hero, brutally murdering his enemies and cursing up a storm. He makes the perfect counterweight for Tick’s more traditional means of heroism and not killing the bad guys. But he’s more than just a one-joke character with his messy background in hero ensembles and a conflicting love triangle. He also has a sentient boat (Alan Tudyk) that also has an odd romance. The more prominent villain is Miss Lint (Yara Martinez), an electric themed baddie that has a tougher time dealing with static electric shocks than slaughtering her way up the villain chain. There’s even a surprising amount of history behind the talking dog Midnight (voiced by Townsend Coleman), a former superhero turned best-selling author.

Not all the characters are unique. Superion (Brendan Hines) is a generic superhero type so devoid of personality he exists more as a plot device than the pompous every-power hero that takes all the credit. Ramses IV (Michael Cerveris) is just as forgettable as an Egyptian themed villain that the show promptly kicks him to the curb. One would think you could have more fun with the presence of the Very Large Man, but his entire appeal outside of pushing the story is that he’s larger than a city and naked. And Dr. Karamazov exists as the most expository of characters, designed for the predictable purpose of revealing backstories about chemicals and super suits. The script tries to make him quirky by playing with his size in mad scientist fashion but does little else to make him a more interesting figure.

The first half of the season gets the ball rolling quickly and it’s a briskly amusing pace. The story never slows down too much to fully explain a talking-dog author or homosexual robot boat; you just have to go with the flow of the weirdness as Arthur strives to find out more about his coveted suit and Tick more about himself. But when the second season finally pumps the brakes to bring the story to a close, the show starts to become the very superhero cliche it aims to satirize. This becomes deeply apparent in one episode where the story grinds to a screeching halt so Dr. Karamazov can reveal the long and not-so-interesting tail that ties together Arthur’s suit, The Terror, and the Very Large Man. So overblown is this explanation that even Arthur, the most curious of this entire conspiracy, remarks that the story is rather stupid. It’s a good line to end on, but it still begs the question of why to include such a story-stopping scene and made me pine for the earlier episodes with their more light approach to superhero lore.

Debuting in the glut of superhero properties adapted for both movies and television, The Tick has enough smarts to be the perfect satire as long as the script doesn’t get too lost within its own world. Arthur is more fun to follow as a conspiracy nut and Tick’s chipper approach to heroism shines brightly in a more city that could use a loveable lug. I even dug The Terror as the overarching villain, despite his sinister humor appearing almost random at times. There’s a scene in his sanctum where he starts playing drums for little more than a Whiplash reference and an excuse for a transition. When The Tick works, it’s some stellar television that comes close to hitting that sweet spot left vacant in the years between seasons of The Venture Brothers. There’s still a few kinks in this silly suit of superhero savaging that need only receive a vigorous ironing of the real and ridiculous to fit snugly into its spot as the counterbalance to comic book TV adaptations. Only then will the show truly be keen.