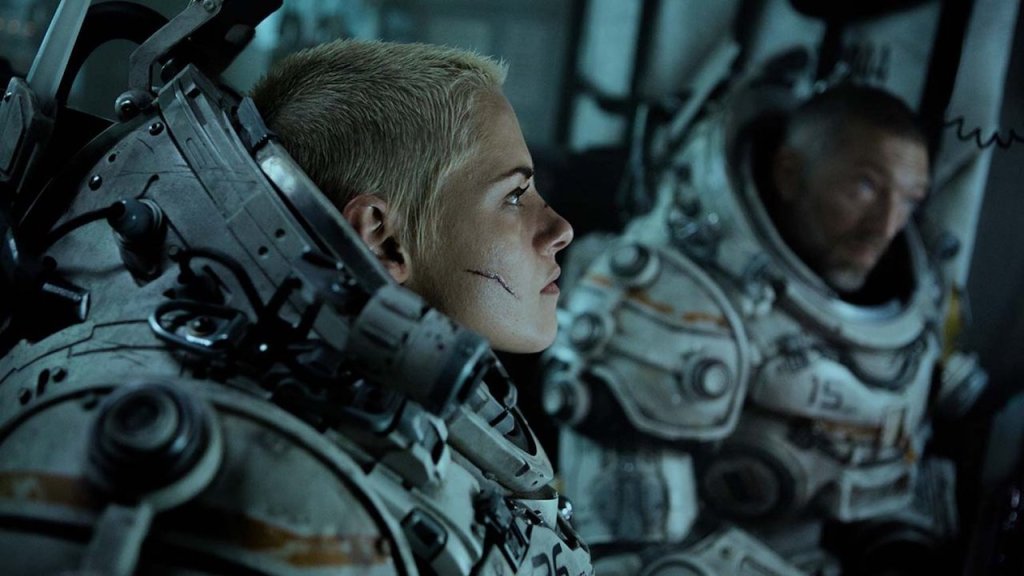 About 1/3 of the way through Underwater, one character remarks that what happens next better not be some 20,000 Leagues Under the Sea shit. And it sort of is. And that’s okay. Underwater makes itself known quite early that it aims to be little more than an atmospheric and thrilling creature feature on the ocean floor. On that level of creating a tense and frightening experience, it gets the job done.

We’re introduced to Kristen Stewart as a scientist aboard a deep-sea drill with a cynical sensibility and hidden past for only a minute before everything goes to hell. Before she has even finished brushing her teeth, her underwater station quakes and starts exploding. With no time to address the mysterious object of emotional attachment under her shirt, she’s already running through corridors bursting with steam, water, rubble, fire, and sparks. With only a handful of survivors from the chaos, she and her group are under a strict time limit of oxygen and stability to find a way off the station and make it to the surface. Oh, and they also have to deal with a swarm of creatures with massive mouths and claws that will rip them to shreds.

Underwater never really attempts too hard to subvert the tropes of the survivor archetypes. There’s the stern captain who keeps a cool head and makes the tough calls with only an ounce of emotion to hold him back. There’s the cocky cynic who is constantly cracking jokes as a way of coping with certain death. There’s the fearful scientist who may or may not make it out alive with how terrified she is. And then a few other vanilla characters are thrown into the mix to make the obligatory audience guessing game of who will die next a tad more challenging.

I must admit that I really did dig the presentation of this fight for survival. Let’s face it, nobody is coming into this film expecting a deep dive of a character drama, present more for the terror than the tragedy. And it certainly delivers on all counts. I loved how within mere minutes of the movie starting, Stewart is already running through hallways of water and crawling through cramped and blocked passageways. Soon, her group find themselves in spiffy underwater suits with limited oxygen but strong enough to survive being eaten by a monster.

And, oh, the monsters! What wonderful designs this move boasts, keeping the creatures just enough in the shadows to seem terrifying and unique. We get to see them in baby form, matured enough to gobble up humans, and a towering version that could probably pass for a Pacific Rim kaiju. Plenty of vicious violence to be had with these nasty things.

Underwater is most definitely not going to be everyone, given its chaotic editing and strict adherence to the creature feature method. Armed with great design, an intense sensation, and a fantastically brooding soundtrack, however, I dug the heck out of this film. Kristen Stewart may not quite have the same resonance as Sigourney Weaver in Alien, considering she has a similar aesthetic and arc but she does exceptionally well in a role where she has to do a lot of running, gunning, hacking, assembling, and making tough calls. If the film must be compared and placed alongside the likes of The Abyss and Leviathan, let it be known as the more punk entry of escaping the deep.