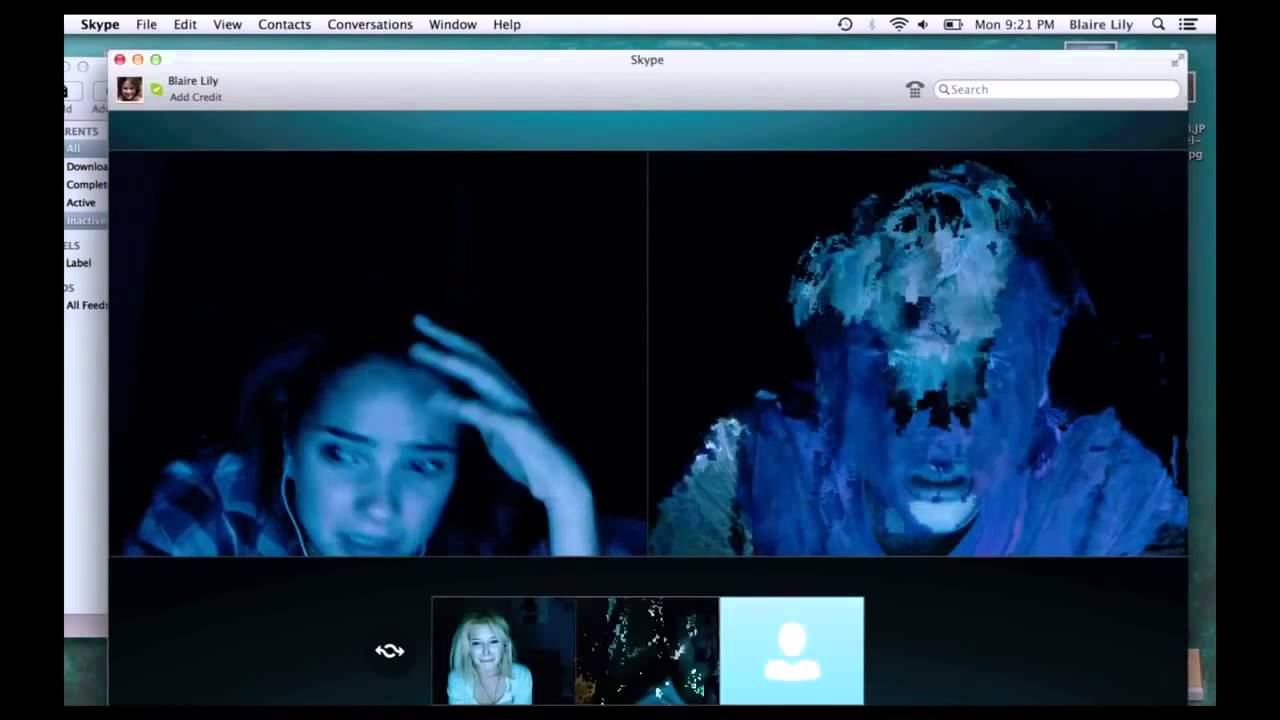 If you really want to scare today’s teenagers, you have to be hip with the times. Aside from not using terms such as “hip with the times”, you have to understand their world. Today’s kids are hooked on technology to the point where a faulty internet connection can send them sputtering into a tizzy. For that lot, Unfriended is the campfire story fit for their lifestyles where the scariest of tales happens through Skype and Facebook. It speaks to them with real technological smarts that it doesn’t sound incoherent and plays to the biggest fears of the desktop environment. This doesn’t make the movie good, but it at least has some idea of what it’s talking about rather than being a half-thought of a spooky tech picture.

The entire movie takes place from a computer desktop. Through various applications and social networking sites, we learn of high school student Laura Barnes and her suicide via LiveLeak. Soon after her death, various friends who knew Laura converge on Skype, including Laura’s childhood friend Blaire. They’re all assembled in a group chat by a mysterious user. With no avatar or webcam – only communicating to the group through text chat – the unknown person identifies as Laura Barnes. The teens don’t believe it’s her, most likely a hacker posing with her account. But then the ghastly online figure begins messing with our characters by removing buttons from their browsers and posting secretive information on social media.

Such a concept on paper is rather laughable to my generation that didn’t grow up on social media, but I thought about how the youth of today might view such first-world problems. These kids spend nearly every hour of the day glued to the screen of a computer or mobile device that any change in their routine of applications shakes their world. There’s a strange fear they have for losing that level of communication. It’s still pretty ridiculous to me the way they freak out about not being able to force-quit a program, but I can understand being freaked about from such a limited knowledge of technology.

Of course, not being able to close applications and getting cyberbullied by a hacking ghost doesn’t meet the requirements for horror. The ghost of Laura Barnes starts playing games over Skype where she ends up murdering the losers. Sometimes it’s putting their hand in a blender and other times it’s just making them have a fatal seizure. As she picks them off, we slowly learn of the terrible story behind their bullying of Laura. This ultimately makes everyone in the picture unlikable with nobody left to root for by the end. I didn’t care who lived or died as all of them are despicable people who don’t consider the consequences of any of their actions. I can’t even root for Laura to slay all these terrible people because she stoops to the same low levels of bullying by creating memes out of her murders. Nobody learns anything and nobody changes their ways. It’s just a depressing picture of a culture obsessed with viral content that use the internet for little more than social bickering and mean-spirited pranks.

Getting off the topic of the unlikable script, one might find the movie noteworthy for taking place entirely within a computer screen. It’s not the first production to attempt such a concept (Open Windows), but it is the first to actually use familiar software. Paying for the rights to use the real software of Facebook and Skype better helps the target audience relate to the setting. And that’s something you have to get right for a picture such as this. It’s a little hard to get into this picture if it used knock-off names such as Friendface and Clype. The rights to the names probably didn’t cost that much considering the complete budget for this film was only $1 million. But for being desktop based in filming, I must admit the movie at least makes decent use of various programs and precise timing in pealing back the layers of the characters. Opening multiple windows to see the characters secretly chat among each other while on Skype did create a certain eye-catching tension. Just imagine if you actually care about these kids how effective that direction would seem.

Director Leo Gabriadze’s interest for making this picture was the changing methods for bullying that have shifted to an online arena. Not finding some clever aspect to seek a way out of the sludge that breeds from the worst of personalities, Unfriended just basks in the disgusting and laughable nature of it all. It has all the goofy faults for being so overly spooky about the cyber boogeyman and all the hate for displaying how cruel high school students can act online. The movie purposes some interesting ideas of modern commentary, but never takes advantage of them. What it all boils down to – after all the wonderment of the stalking internet user – is just another teen slasher with dopey teens who bite the dust. Here’s a tip, kids: If you find yourself online with somebody you don’t know, you should probably get off the internet for the night. Don’t give them anything, don’t talk to them – just shut it down. If I was able to grasp these wise words from my parents about online safety in 1999, then it really speaks volumes about the addiction of today’s kids on technology. It’s a unique societal aspect tossed to the wolves for a movie that could be dubbed as “I Know What Posted Last Summer” or “All Millennials Must Die.”