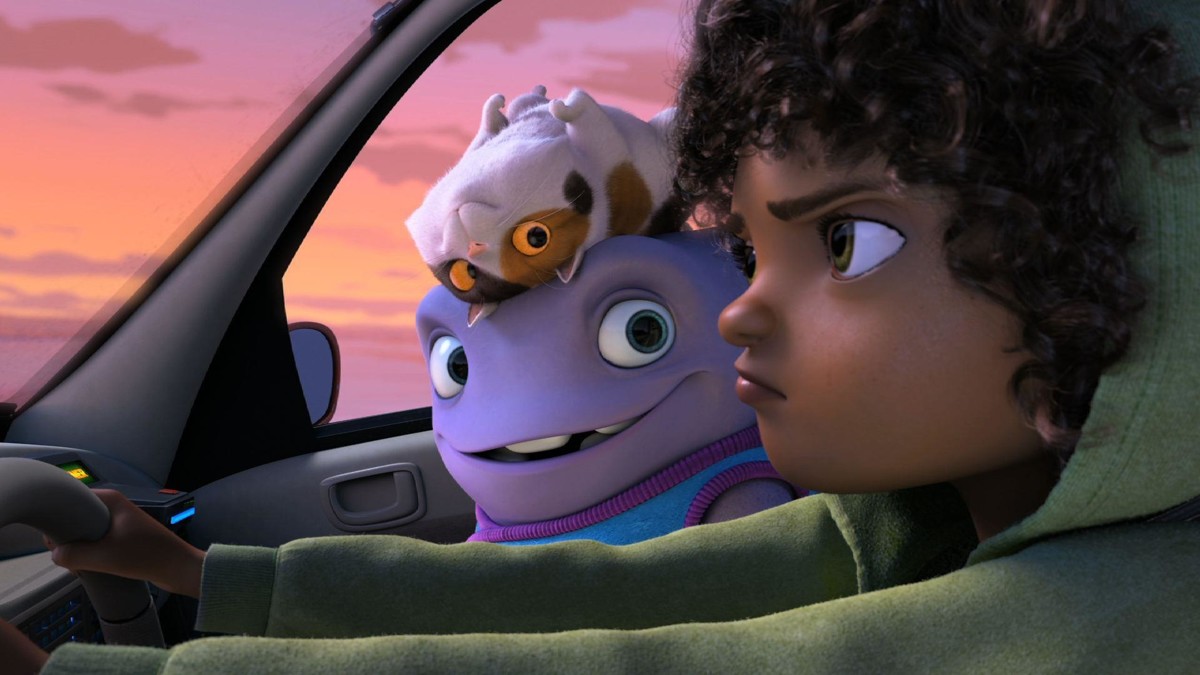 Dreamworks is an animation studio that usually aims to match the level of Pixar’s visual beauty, but rarely do they reach that level of storytelling. Home comes as a bit of a surprise in that it’s a bland dud in both categories. You need only compare the movie to Dreamworks’ projects of last year: the fantastical splendor of How to Train Your Dragon 2 and the quick wit of Penguins of Madagascar. By comparison, Home feels so stock and simple that it is as though it were produced by a studio struggling to be a Dreamworks production.

The design is just a bore. The gummy-shaped aliens known as the Boov are squat and simple beings that all look alike. I sensed a channelling of the formula for Minions, but those banana-colored, pill-shaped guys at least had a few differentiating designs to tell them apart. These aliens all seem as though they were clones, differing only in voice and maybe a mustache. But for as doe-eyed and cute as Dreamworks aims to make the Boov, they grated on my nerves with their annoying stupidity and inability to find a proper home planet. They’re led by an idiot of a king voiced by Steve Martin that has no idea how to lead, but plenty of time to babble in Steve Martin lingo. Somehow they manage to conquer Earth by vacuuming all the humans and quarantine them to Australia. How this tactic differed from their earlier conquering methods – where the Boov couldn’t handle carnivorous beasts or giant robots – is never answered. Perhaps Earth decided to destroy all their weapons. It’s the only acceptable reason how this invasion went so flawlessly.

The Boov are such ridiculously uneducated creatures – invading a planet where they don’t even comprehend how a toilet works – that the runt of the litter has to be incredibly foolish. So unlikable is this character that he has been designated as Oh (Jim Parsons), named after the sigh induced by his presence. All the Boov make loads of mistakes, but Oh is singled out considering his mistakes mostly damage his entire race. You can almost smell the heartfelt message about being an outcast careening towards the second act.

When Oh causes one too many culture-destroying errors, he goes on the lam to find a new home in Antarctica. Along the way he picks up the only human girl outside capture – a plucky preteen named Tip (Rihanna). She’s not a very interesting character outside of seeking her mom and acting as the straight character to the goofy Oh. They go ahead on their little road trip to their locations of choice, becoming best of friends along the way while they learn valuable lessons about family, friendship and all that jazz.

I don’t like walking into a movie where I can predict its outcome and my opinion, but there was a little voice in the back of my head that just screamed this movie was a product of an assembly line. All promotional materials seemed to suggest that this movie was rushed from Dreamworks’ template where they forgot to remove the placeholder content. They designed cute aliens, but didn’t make them unique. They added in a kid-relatable character, but forgot to give her personality. They staged a large-scale chase across an iconic city, but forgot to make it thrilling. They made the story family friendly, but threw out a truckload of logic in its world to make it so. They even jump the gun by relying on the tired device of dancing to pop music far too early that the inevitable finale of a dance party fizzles out any entertainment.

Home may seem as a cute little animation for the kids, but it’s overly fluffed up with soft content that even the kids will grow weary of its artificial sweeteners. There’s no imminent threat to make it thrilling, no big challenges for the characters to conquer and no daring nature to the story or its comedy. It’s a passive movie that will not offend with any violence or scary scenes, but won’t be uniquely entertaining either. And this is precisely why I can’t recommend the picture in that there is hardly any excitement or risk. Animated films should inspire the imagination of children with characters they can identify with and visuals that stimulate wonder. They shouldn’t just distract with a few crude jokes about urine, add in a familiar song with dancing and send them on their way.

And as long as I’m coming down hard on the movie, I might as well admit it: I hated the Boov. I didn’t like their design, their character or the culture. By the end of the picture I was hoping a large alien armada would swoop in to zap these little guys into globs of gelatin. Are these the kinds of thoughts a grown man should be having during an animated children’s movie which just wanted to be sweet and silly? Chalk that up to one more reason not to see this picture.