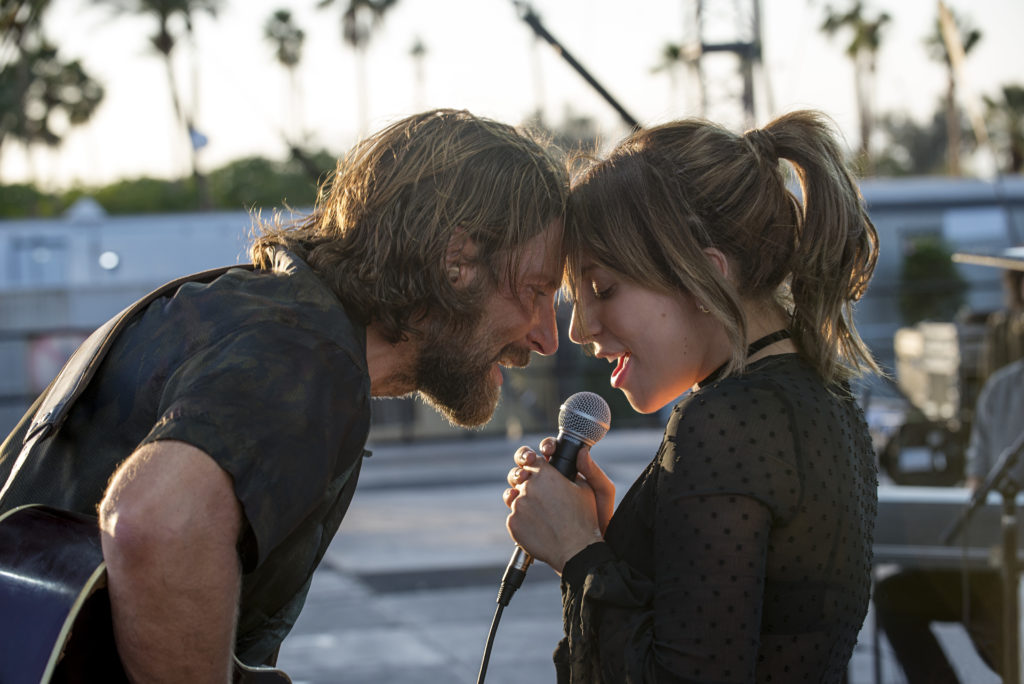 If yet another remake of A Star is Born seems like one too many, consider Sam Elliott’s words in the film about the nature of musicians. All songs have a somewhat similar construction and it’s all up to the artist to interpret it their own way. And director Bradley Cooper certainly gives this old story a flavor all its own, sparkling with fantastic songs, character chemistry, and a skillfully edited presentation. At the center is Lady Gaga, taking her well-established singing abilities to the big screen. Can she act as well as she sings? After this film, there’s little doubt she was destined to be an actor. The film’s title couldn’t be any more fitting for her.

It’s also somewhat fitting the way Bradley Cooper’s character is tied into this story as well, as an accomplished talent willing to step back a little and watch something new be born. He plays Jackson, a music legend that is starting to take that dark slide down the slope of obscurity. With his ear condition, drinking problem, and drug issues, he’s one failed performance away from becoming a nobody, despite his current level of fame that gets him noticed everywhere. Seeking more, he strolls into a drag show and spots Ally (Lady Gaga) on the stage. Of course, he’d have to recognize her as the one performer not in drag, but how could anyone’s heart not be sent soaring when they hear her sing one of the most memorable renditions of “La Vie en Rose” with her voice and strut?

Now I’m sure from that initial description and the many iterations of this story throughout the decade that you can piece this story together. Jackson will pursue Ally, get her on stage, turn her into a star, fall in love, and slip towards darker paths of hating himself. Cooper is aware of this and thankfully keeps his film tightly edited to hold on the aspects we care about most. Notice how little we hear about the press in this story or the tours, focusing almost entirely on the intimate moments between Jackson and Ally. We get to know about them and their undying love than how the media spins their romance, lingering long on their conversations as they struggle and quiver with what to say next.

And, of course, the music performances are top notch, given brilliant staging for songs that will never leave your head. It’s pleasing to hear that these segments don’t feel random, but carry some real emotion and revelations of the characters, to the point that the repeated song of “Shallows” doesn’t sound the same twice, even when sung in a similar way. They hold your attention as well when keeping a close eye on when Cooper might stumble in his drunkenness or Gaga break down in tears.

Also worth noting is the astonishingly strong talents of the supporting cast. Sam Elliott is always a fine actor, but he really busts his acting chops as Jackson’s older brother, getting extremely fierce when confronted about the family and struggling to remain strong when he witnesses Jackson’s fragility. Andrew Dice Clay is such a character as Ally’s supportive father working from home that there’s a whole other movie with such an interesting role. And Dave Chappelle still makes a mark for the few scenes he strolls into as Jackson’s old pal.

A Star is Born has all the right stuff to ensure that it will not only stick out an original picture but maybe the best to carry the title. It’s a fine-tuned, well-orchestrated picture that works just as well as a musical delight as a firmly weepy tear-jerker. And all suspicions are quickly put to bed whether or not Gaga can act and Cooper can sing. They succeed with such flying colors to not only make a great film but one of the finest movies of the year.