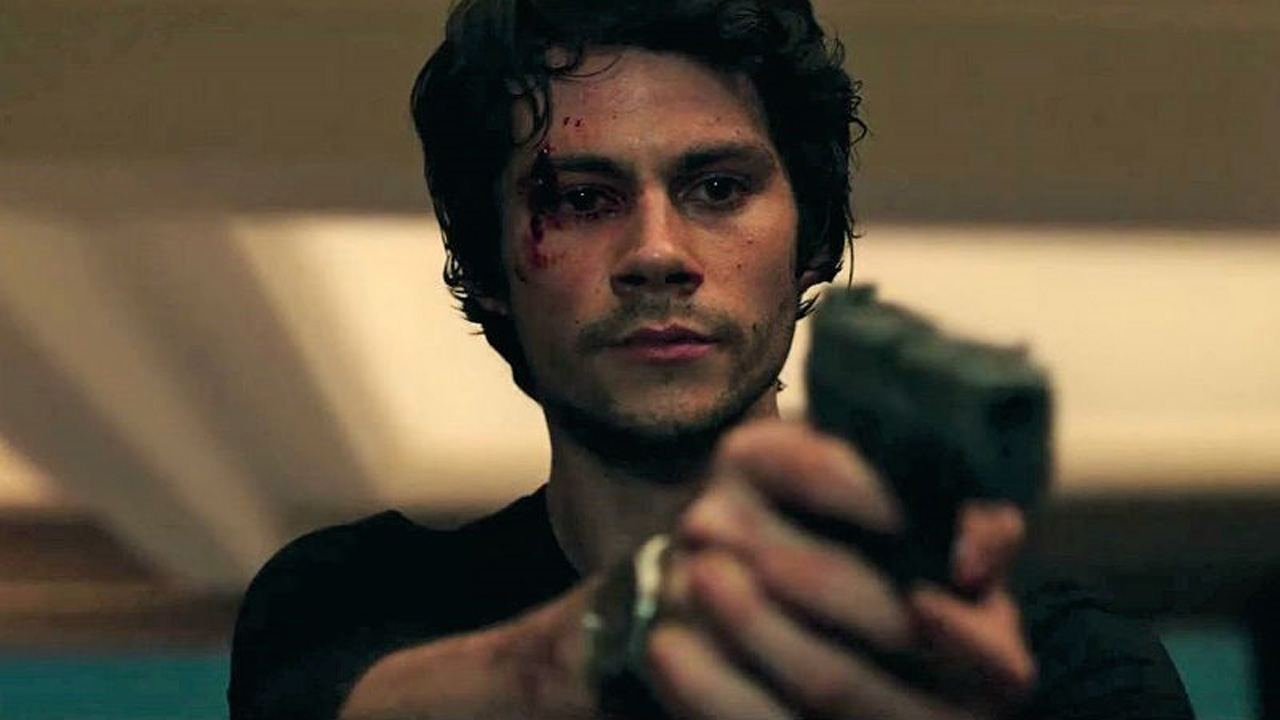 The buff and hunky Mitch (Dylan O’Brien) has just asked his girlfriend to marry him, making this grand gesture at a beach in front of all to see. There’s an acceptance, a kiss, and a cheer. With everything going so right so early in the picture, tragedy isn’t too far for this action thriller.

Now I was ready to watch this girlfriend bite the big one. Yet I didn’t quite see the death coming on the beach in the form of gun-toting Muslim terrorists that ride in as though this were Red Dawn 2: ISIS Boogaloo. True to Red Dawn as well, the film proceeds with grizzly over-the-top violence and some hyper-nationalism rage.

If you think I’m being too hyperbolic to the usual bullets-over-brains action pictures, consider how the film follows the beach massacre with a terrorist recruitment video with rock music and footage of deaths in the Middle East. There is no contemplation on how inhumanity of war or the toxic brooding of nationalism. Did we really need this for a film about revenge and nukes? Such catharsis feels inappropriate.

This is a world that is designed to be as grim, angry, and grossly mean as possible. Mitch spends the next few months after his fiancee’s death growing more hostile. He’s kicked out of the gym for being too aggressive. He’s kicked off the gun range for being too violent and breaking rules. He’s nearly kicked out of his apartment for throwing knives. This is our hero and not in a tragic cautionary Taxi Driver sort of way.

Mitch tries to infiltrate a Muslim terrorist group to assassinate their leader. The CIA despises his actions, but not entirely. They don’t seem him as a danger but exactly what they need: An angry, aggressive, murder machine that can kill all them terrorists real good.

Mitch is placed in the hands of Stan Hurley (Michael Keaton), a Cold War veteran with a few more screws loose than Mitch, acting more or less as the screwdriver for CIA kill-machines. He teaches them such valuable CIA tactics as slitting someone’s throat, shooting real good, and assassinating people in their sleep.

Mitch’s first official mission takes him to Rome where some terrorists are crafting a nuke. Hurley warns Mitch not to get personal while on the job. Mitch will ignore this because, hey, it’s Mitch, our hot-headed young guy who really, really, really wants to shoot up some Muslim terrorists and get that sweet and not at all empty revenge. Hurley will also let the mission get personal as will the supporting Turkish agent of Annika (Shiva Negar). What a terrible bunch of CIA agents, even when bound by movie logic for what should make them great in the field.

Little character is present here. The agents spend more time arguing in expletives and growling at the terrorists. Keaton eats off the ear of a terrorist at one point as though he’s a junkyard dog. What a quirky old coot, that crazed vet of a CIA operative.

Very ridiculous incidents happen to make the thriller more exciting, I suppose. Mitch follows a lead back to his hotel and then run from hungry dogs that chase him through a parking lot. Annika fails to secretly assassinate the terrorists by screaming wildly when murdering a wounded target that’s personal.

Hurley’s silly rule for his operatives is that if you know you’re outgunned, kill yourself. This happens to one of the characters, but only with one terrorist holding them hostage with another CIA agent aiming. If one could grab the gun in that situation to shoot yourself, why kill yourself and not the terrorist?

The film tries and fails to cover up its ugly sentiment of Muslims. A training exercise has CIA trainees sauntering about a training course in a shopping center, looking for terrorists. They go straight for the Arabs, but the pregnant white lady is the secret target. “See? White people can be terrorists as well and it’s not all Muslims,” the movie positions and the boomer apologists note. By the way, all villains after this point, aside from the white lead of a rogue CIA agent is Muslim.

Annika is suspected of working with the terrorists to which Mitch works on that hunch by beating the piss out of her, nearly drowning her to death. He was right to suspect, but what if he wasn’t? This paranoia isn’t addressed and one would think it would be given how Mitch literally sees the face of the same Muslim that killed his girlfriend on all his targets. Islamaphobia? Hurley would argue no, it just makes him a red-blooded American willing to do anything for his country, even for the sake of his own sanity.

It’s not very surprising this is based on a best-selling book series by Vince Flynn, oozing that incoherent vibe of military love and American nationalism that no doubt fills a certain void left by Tom Clancy. It was exceptionally disheartening to leave the screening and hear the older crowd buzz about how true to the current world the film portrays current politics and international relations. Very scary that they hold such views, especially for a picture that briefly turns into a Roland Emmerich disaster picture with laughable over-the-top effects. American Assassin deserves to be forgotten in the slew of other Jack Ryan style thriller copycats and given that it has such a generic title, that shouldn’t be too tough a wish.