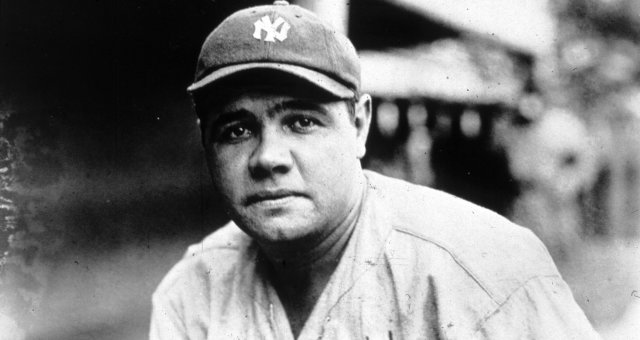 Babe Ruth was a figure I first heard about through the classic baseball movie The Sandlot. The children of that picture talked of the man as if he were a god among men for his legendary skills at bat. It was only later through various documentaries and books that I learned more about the man and his historic career. So many features and segments have been presented on the Babe that this DVD actually loads up the special features with plenty of previously produced content.

So what more can this Major League Baseball produced documentary provide outside of a few more clips from the archive? As the title implies, this hour-long feature attempts to find parallels between Babe Ruth and the mythological tales of heroes. But if that seems a little out there as more of a thesis paper, the documentary thankfully pulls back enough to focus on Ruth’s major contributions to American culture.

Martin Sheen narrates this decent documentary that’s suitable enough for television with its motion graphic displays. There are plenty of talking heads from elders of the era, historians of Ruth’s work and baseball greats that talk up the legend as such. They all share some great stories about the man amid the amazing archival B-roll footage of Ruth on and off the field. It was especially entertaining to see how the man acts around his family in home movies and how he appears as a celebrity doing cameos for film. This footage is pretty neat to watch which baffles me why we get to see so little of it. This would have been an opportune selling point for the DVD to feature this footage uncut in the special features.

But let’s discuss what you’ll really get out of this documentary as opposed to any number of documentaries on Babe Ruth. Yes, the documenters do indeed compare the Babe to Hercules from both a story and character level. While there are some clever similarities discussed in the struggles and triumphs of both men, this is sadly where the documentary starts to go a little Ancient Aliens on us. You can tell that the people who wrote this picture went in with the best intentions of delivering a unique examination on baseball’s greatest player. But they ultimately struggle to fill up the meager running time by focussing far too much on the mythological aspects of the man. This leads to a lot of what-if theories that sounds like the words of a madly-obsessed Babe Ruth fan. If this documentary had been any longer, would they really go down the road of asking if Babe Ruth could defeat Hercules at baseball? I wouldn’t want to meet the talking heads for that segment.

Did Babe Ruth’s life really require such a documentary comparing him to Hercules? Probably not. After all, there’s enough interviews, archival footage/photos and plenty to talk about with the man’s legacy that it doesn’t need this extra layer of mythological discussion. Perhaps this angle was taken to give the next generation a new feature on the Babe with a more appealing aspect. But do kids really need history to go to this level to be interesting? It feels unneeded as if it’s trying to match the likes of Ancient Aliens with its wild ideas. Babe Ruth is already an amazing figure in his own right – he doesn’t need this extra fluff to convince the audience that he was larger than life. If only this picture had the confidence in its own source material to showcase the spectacular footage the MLB archive has to offer, it could have been a more engaging feature. Save that Herculean mythological comparison for a thesis paper or the next bickering bar fight about who would win in a fight.