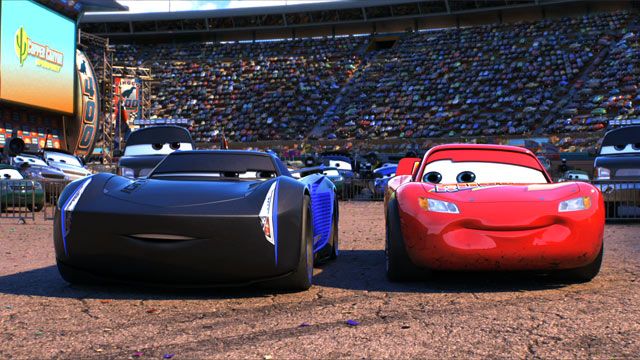 The further this Cars franchise goes, the more creepy and bizarre questions arise, going unanswered. What happens when the cars of this world die? Are they buried in concrete, scrapped in a junkyard or harvested for parts at a hospital? Are there hospitals in this world of cars? Yes, these are all very stupid questions to be asking about a rather silly and simple story about sentient racing cars, but I expect more from Pixar. They’re a studio that usually puts a lot of effort into building their worlds so that I don’t find myself asking how fish talk and why a rat controls a human.

Also lacking in being fully assembled is the script, ripped straight out of other sports dramas and even the first Cars movie. Lightning McQueen (Owen Wilson) is getting on in age. It’s not that his parts are starting to rust or that he’s come down with whatever cars define for cataracts. A new generation of cars are entering the racing circuit with new and better parts that allow them to be slicker and faster on the track. McQueen’s old buddies are retiring because they simply can’t keep up. Now instead of laughing and joking with his usual racing competition, he finds himself hopelessly trying to catch up with the insulting Jackson Storm (Armie Hammer). This new racer is cocky, smug and so full of himself, as McQueen once was. Maybe McQueen could teach him a few things about being a better sport and a more compassionate racer. The would imply, however, that McQueen is worthy of mentor status, which he hasn’t reached just yet.

All McQueen can think about is getting back at Jackson by beating him in a race, especially after he suffers a nasty crash on the track and has to endure the obligatory slump of post-failure depression. How can he do this? Well, Jackson has fancy new parts that allow him to have better control and speed. Could McQueen get some of those parts or would that be too costly? Nobody knows and nobody brings this up. All that can be done for a car to improve is train with treadmills, simulations and meditation. That’s a typical method of improvement for most sports movies, but Cars 3 seems to forget that this is a world of cars, thinking nothing about how strange it is for cars to workout their tires past a quick gag that lasts longer than it should.

McQueen’s new trainer is Cruz, a perky young coach that still looks at the veteran racer as an old guy who might leak oil. But Cruz is in need of training herself as she’s more used to simulations than actual driving. When the training proceeds outside, McQueen and Cruz form a bond strong enough that she can confess how she always wanted to be a racer, but always felt excluded as a woman. There’s a chance at this story being a gleaming example of female empowerment, but it comes so late in the story that its inclusion comes off more as pandering than thoughtful.

I can’t let go of the glazing over of death in this world because it is ever present, even on an unintentional level. Previous recordings of the late Paul Newman were used for a few Doc Hudson flashbacks, but they do little to improve the story and only reminded me about how Newman is gone. Rusty and Dusty were once voiced by the brother duo of NPR’s Car Talk, but the passing of one of them makes their bigger presence here feel very awkward. George Carlin has passed away long ago, but the brief reappearance of his character of a head-in-the-clouds Volkswagen made me think about how he is no longer with us. Even without thinking about the celebrities, McQueen spends so much time lamenting and getting nostalgic over Doc and his old friends that movie becomes overly somber.

If Pixar wanted to make a sentimental picture about moving on, that’s fine, but they not only forgot to make us care about the characters; they additionally don’t establish a cohesive tone. McQueen’s crash is shocking, but a demolition derby where dozens of cars are severely damaged is treated as silly. This lack of defining the world makes the mind go into dark places for an ill conceived concept. I don’t want to think about what practical purposes the cow tractors serve in this world, if they are in fact treated as cows for livestock or milking.

It’s clear that Pixar put more effort into the sentimentality and nostalgia of the Cars legacy they did for this world or its script. It hits so many of the expected beats in the final chapter of a sports saga, but forgets to take advantage of the car aspect, simply ignoring it for quintessential moments. It wants to be a sweet farewell for the characters, but leaves many of them in the dust, as with McQueen’s comic relief sidekick Mater (Larry the Cable Guy). For being the last film, I hope, Pixar shouldn’t be playing it safe and should be taking more risks. Instead, this final film takes it slow, hoping the audience won’t see the parts coming off or hear the engine sputter out.  This is the same old jalloppy with a new coat of paint, doing little to mask the bigger problems under the hood.