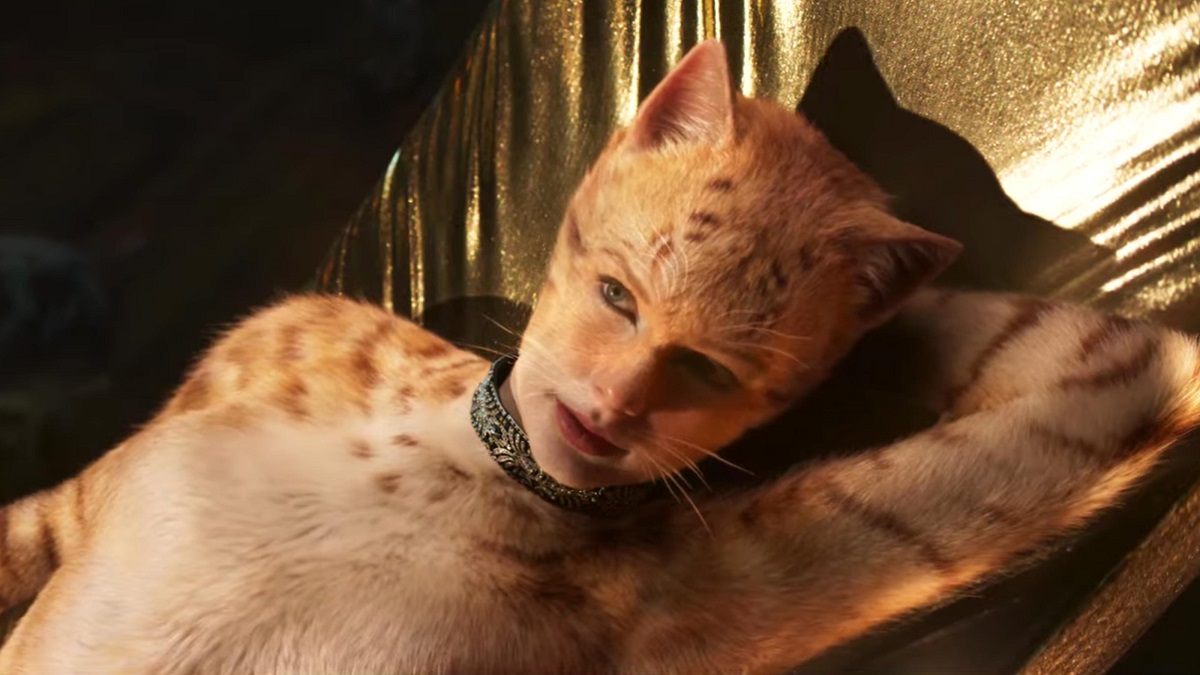 Halfway through Cats, my brain broke. I can’t recall if it was when Ian McKellen started hissing like a cat or when Judi Dench started rubbing her whiskers on other cats. I thought about picking my brain back up but then realized something; this is a musical called Cats with incoherent smearing of musical hallucinations that leaves little room for character or story. Do I really want to analyze the picture that closely? This is little more than a fever dream and I figured I might as well treat it like one. So onto the soda-stained and popcorn-littered theater floor my brain goes!

Cats is rather brilliant in how it starts off uncomfortably weird and only grows all the more incomprehensible and bizarre. One would think that the easily amused and curious central cat of Victoria (Francesca Hayward) would be our audience surrogate for the cats of the street. She more or less is but all she can do is stare dumbfounded at this strange world that exists in some nightmarish limbo between a CGI movie and a stage musical. She learns of the Jellicle cats, who dance and sing for a chance to ascend to the heavens for a new life. Yes, for those not in the know (myself included before heading into this picture), this is a musical about cats arguing their way into being sacrificed for reincarnation. What a strangely twisted tale!

But, wait, there’s more! The Jellicles have a villain trying to prevent all cats from getting the chance to win. That certain Jellicle is the evil magician Macavity (Idris Elba). With his fur coat and unexplainable magic, he transports the competition to his boat where he can be the only cat left to sing his way to the top. But there may just be another cat more worthy; a poor soul of a disgraced cat played by Jennifer Hudson. Oh, did I mention that the winner is decided by Judi Dench wearing a ridiculous fur coat? And Taylor Swift throws catnip on everybody to make them her dance slaves? And that every character is some mutant cat creature? This movie is crazy by the way.

I don’t think there are any words the can properly stress how unbelievable this picture is in that it is hard to pin down and tough to take seriously. The music switches between so many styles, from creepy 1980s synth to broadway opera to classic musical set-pieces. There are even a few moments in the picture’s dreamy ballet sequences that have an unease I can recall from childhood viewings of Return to Oz. Look, I’m not saying kids are going to have nightmares over such a film as Cats but I’m not saying it’s impossible for them. Or an adult, for that matter.

The film becomes such an indecipherable dose of musical mashing with off-putting visuals that there comes a moment where the audience breaks. I could feel it in the crowd. Something within us just snapped and we started laughing. Hard. I can’t pin this on any key moment, be it James Corden predictable role or Rebel Wilson doing her clumsy routine, but something pushed me over the edge. Perhaps it’s because the film never settles on anything; not on a musical style, staging, character, story arc, or even cohesive rules of the Jellices. So much of this just doesn’t make sense. And I’m kinda glad it doesn’t, never compromising on its weirdness and only piling on the odd to absurd degrees. Rather than beg for it to cease, I reached a point where I just started encouraging it, if only to see how much higher it could go in its craziness.

Cats has such a weird whimsy that it’s intoxicating trash. It boasts a strong list of A-listers, features some elaborate special effects, and has highly coordinated dance numbers. And of it is in service of creating one of the most trippy pieces of nonsense that is so silly and ridiculous there’s an admirability in its earnestness. Will kids dig it? Possibly; the music is catchy enough, the actors delivering the goofy lines as best they can, and the dancing looks stellar here and there. But for adults? Hard to say. It depends on how much you enjoy losing your mind or have a fervent desire for a fever dream. Just don’t take while sick; you may believe you only witnessed a mental swirling of Zoobilee Zoo and a British ensemble drama.