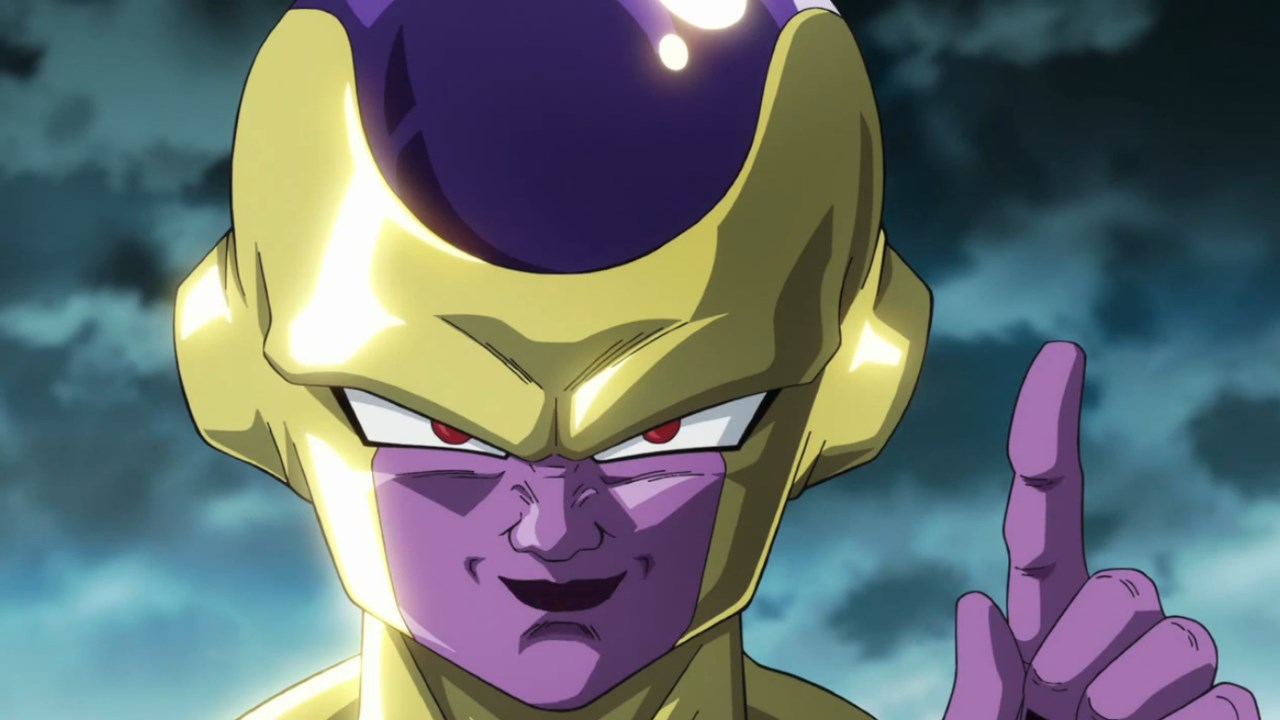 While the previous Dragon Ball Z movie managed to win me over by taking a new spin on the fantastical fighting formula, Resurrection F finds the franchise going back to its old bad habits. The villain this time around is the purple-domed alien Frieza, the most powerful warlord of the series that just can’t seem to stay dead. He is once again revived by his crazy zealots and once again seeks out Goku so he can once again get his revenge. This is a character that was once fearsome for controlling the galaxy’s greatest army and more than able to handle any warrior that could be thrown at him. But with this movie marking the second time he’s come back from the dead, he has lost that edge as a worthy antagonist. Even our heroes seem to be underwhelmed by his presence since they already know the outcome.

It’s not that Frieza doesn’t have any unique aspects to make him a great villain. He was once the ruler of the galaxy – lording over the villain-turned-hero Vegeta after having decimated his planet and his Saiyan race. Having been beaten twice by the Saiyan race which he once slaved has consumed him in rage. He lives only to see that Goku and Vegeta are dead. But after failing at this exact revenge plan once already, what has he learned since then? Apparently not that much. He builds up a new army to rule over the universe, but they serve as little more than a large amount of fodder for our lesser heroes to fight. Frieza has acquired a new form, but doesn’t have any new powers or surprising traits. And for a being that is revenge-driven, he sure spends a lot of time laughing manically and monotonously monologuing.

Resurrection F goes back to the direction which made Dragon Ball Z both iconic and deeply flawed. Whereas the previous movie Battle of Gods had character, this movie is mostly just fights. Veteran characters Gohan, Krillin, Piccolo, Tien and Master Roshi finally get a chance to show off their fighting abilities in how they dispatch wave after wave of Frieza’s forces. I had forgotten that Master Roshi – as old and feeble as he appears – could bulk up like the Hulk when he’s ready to fight. They all get to battle and show off their trademark special moves that I’m sure will make the hardcore Dragon Ball Z fans cheer to see these attacks once more.

Despite some rousing chase sequences of warriors battling through caves and woods, the fights become simpler and cheaper per Dragon Ball Z‘s budget-tightening animation. Characters will fight in blurs of action lines when in closeup and in spherical explosions when fighting from a distance. Blasts of energy are fired off as big, blinding lights that consume opponents. It’s amazing how this feature-length animation can have such rich colors of design and still revert to the old dog tricks of the series.

I suppose that given my familiarity growing up with the Dragon Ball Z TV series and its movies that I should be having some nostalgia for all this. There is no doubt in my mind that those who grew up on the franchise will have a soft spot in their heart for Goku delivering a Kamehameha wave or Frieza gnashing his teeth in rage at those pesky Saiyans. Memories are most likely surfacing of weekday afternoons huddled around the television to see what Goku would do next. Maybe I’m getting too old, but nostalgia just doesn’t do it for me anymore. After 14 of these Dragon Ball Z movies, I’d expect the resurgence to be something more than the same old thing. Would it kill the franchise to give just a little more depth and personality to Frieza?

But it’s Dragon Ball Z – why would I come in expecting more character than fight? It’s because Battle of Gods actually gave some character and humor in addressing the flaws and finding the stronger points. The past villain Beers, the galactic god of destruction, was such a welcome presence from the usual that he’s actually trotted out in this movie to give some comedic support. He’s just such a great villain as a lazy cat creature that refuses to destroy Earth as long as they keep providing him with ice cream and pizza. Beers grabs the attention of nearly every scene that it’s such a shame his purpose is to provide the most overused third act plot device of the sci-fi genre. They even announce this plot device early just so it doesn’t appear as though the writers just pulled it out of their butts when needed.

At its best, Resurrection F will at least hold your attention. I didn’t like how Frieza was so underwhelming, but was amused at how Goku and Vegeta were so disinterested in him as a threat to fight over who will destroy him. The day jobs of the Z warriors are only addressed as lip service, but still very much appreciated to see Krillin as a cop and Piccolo as a babysitter. These are all nice touches, but they still adhere to the usual formula as being minor strokes of character amid fight after fight. The only thing that truly feels different about this movie is the color palette. The new Super Saiyans have swapped out their yellow hair for blue and Frieza has ditched the white and purple exterior for gold and…purple. I guess the new purple is a shade darker so there’s at least some effort present.