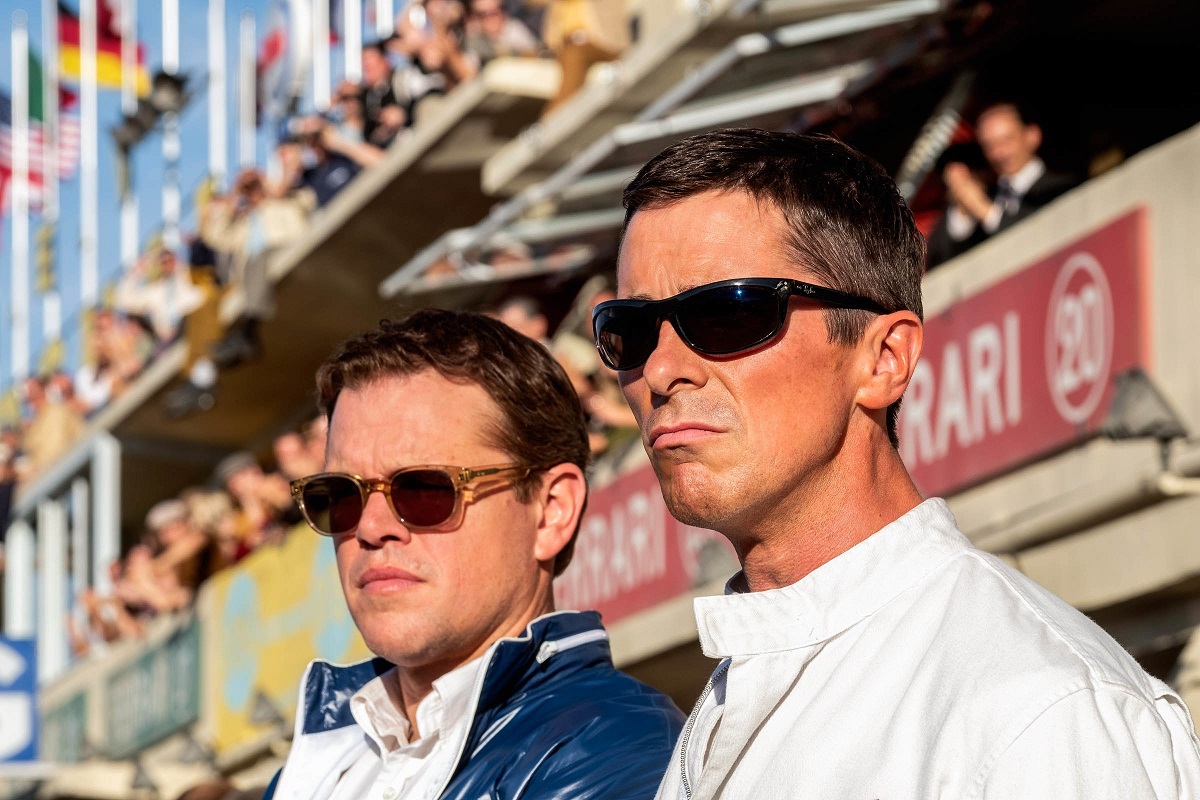 As the triumphant tale of how Ford won the Le Mans race, I wasn’t all that enthralled to hop into the passenger seat of such a story. This was especially concerning for a picture that runs 2 1/2 hours that I fully expected to be bogged down in its checklist of history and mechanics. But I was pleased to be proven wrong by James Mangold who directs Ford v Ferrari as a well-oiled machine that narrowly dodges melodrama.

What makes this film work so well is that in place of trying to stage some racer rivalry, money issues or family drama to push towards the finish line, a yearning to do what you love keeps this picture moving. Carroll Shelby (Matt Damon) I thought for sure was going to be established as a racer haunted by his past of racing the Le Mans, settling for being a car designer. He’s aware of the dangers but uses this information more as a strategy for the next driver than an aspect of coming to terms with himself. That driver happens to be Ken Miles (Christian Bale), a down-on-his-luck WWII veteran who just wants to race even if it doesn’t pay the bills.

Fortunately, for both of them, Ford needs to pull themselves out of the economic gutter of the 1960s. After a failure to merge with their rivals of Ferrari, the struggling auto company sets its sights on winning the Le Mans race as a power play against the feuding Italian company. For Ford and Ferrari, their reputations are on the line for the future of their companies. For the likes of Carroll and Ken, however, it’s just a chance to live a little more free to seek the highest speed with the best car. Their passion remains focused more on the race than anything. Carroll spends a lot of time trying to plan his next design while Ken tries to contain his pompous nature, saving it for the track where he can really open up.

Since they don’t exactly have a rival to best during the big race, their nemesis is Ford itself. Ken warns Carroll before accepting such a gig that a large corporation of many suits and stuffy executives will stifle their decisions to build and race their way to win. And, what do you know, he was right, despite being a snob. While Ken struggles to keep his tempers low and not unleash it on a windshield, Carroll plays hardball with the Ford CEO, banking his garage on Ken and staging test drives to convince the company to keep them on the Ford team. This isn’t easy, especially when the executives consider Ken to not be Ford material. They look upon him as a bit a beatnik, despite being a war hero. He doesn’t look or sound like a beatnik but these old guys are clearly behind the times, considering they just don’t understand the manly obsession of James Bond.

While I’ve never been big on racing scenes, I must admit the race of Le Mans is beautifully staged. The race is dangerous and fast but the camera always keeps a close eye so we never got lost in a blur of chrome and grease. With the race scenes most vivid, it’s easy to get into the action as much as the racing gurus. This is especially comforting given how fast-paced the first act of the picture is in setting up the race and rivalry, spouting off so much business and car talk with such energy the picture sounded more like it was going for a heist picture.

Even though the racing is the biggest draw, as well as some flat-out gorgeous cinematography of wide-open tracks, the comradery between the two racing experts keeps the engagement high. I enjoyed watching Carroll and Ken bicker about how they should approach their job. Sometimes they argue over specifics about how Ford is stifling them. Other times they’ll just outright beat on each other, as in the film’s funniest moment of when they have a duel over groceries. With Ken’s wife grabbing a chair for the fight, they do battle with all manner of food. So if you ever wanted to see Christian Bale beat Matt Damon with a loaf of bread, here’s your dream come true.

The only nagging element of the picture is that it seems to skirt around the bigger question of corporations versus individual creativity. The climax contains one of the biggest fights about trying to fix a race for corporate appeal with deceptive business tactics. Rather than question it further, Ken and Carroll just accept the status quo and move on. To them, the only thing in front of them is the next car, the race, and the next victory. Perhaps it’s best they just keep that drive and never question too much of the capitalist system. In the film’s own away, it narrowly avoids sliding into that curve, favoring a film more about the drive than the why. And on that level, the film takes first place as an invigorating and inspiring picture was some great sights along the way.