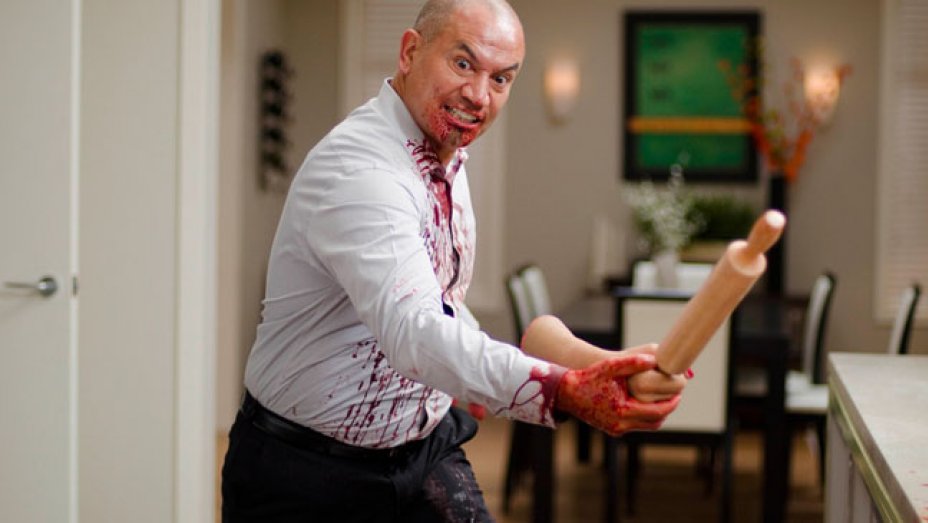 Very few films leave me at a loss for words for their unapologetic insanity. My go-to director for those types of films is usually Takashi Miike, a Japanese director that pushes the limits of indecency while also pulling the rug out from under you. I’d be very surprised if New Zealand director Danny Mulheron wasn’t partially inspired by the works of Miike for this production. Fresh Meat is an absurd little genre bender that manages to hit all the right crazy notes.

At first you believe you’re in for a cooky criminal affair as an over-the-top gang of lawbreakers bust their pal out of prison. They end up hiding out in a suburban neighborhood and take a family hostage until the heat dies down. What the crooks don’t realize is that the family happens to be cannibals and their grown-up daughter has just found this out on her homecoming. And these are not just casual cannibals, but viciously religious one who believe that consuming human flesh will bring them closer to immortality. In fact, the one member of the family that appears the weakest is actually on the level of a crazed killer.

So what starts out as a goofy caper quickly transforms into an over-the-top horror bonanza. All the characters in play here, save for Rina as the relatively straight one, are incredible quirky and ludicrous. It may seem to be reaching a bit far for making them interesting, but it’s surprisingly entertaining as not a single one of them feels underused. Gore-hounds will not be one bit disappointed as the film takes every chance to splatter as much blood and amputate as many limbs as possible. And it still manages to maintain that berserk sense of humor even when the material goes completely dark in the second act.

Needless to say, this is not going to be everybody’s cup of tea. When it’s gory, it’s blood-and-guts sloppy gore. When it’s sexual, it’s incredibly erotic while also creepy. And when it’s attempting to be humorous, it’s a riot for just how far the film is willing to go not just with the bloody slapstick, but the political incorrectness. Just the length of the depravity that these characters sink to for their own gain is so ludicrous you can’t help but laugh. The father believes the whole country is racist for despising his cannibalism that he actually convinces Rina’s boyfriend to dine on the meat (without telling him what kind) despite him being vegetarian. At one point he questions an ear in his meal to which the father responds by chewing an index finger. It’s that fearless tone of going for the whole insanity of the reasoning which makes Fresh Meat such a genuine horror/comedy with a very much New Zealand flavor.

If you have the stomach for it, Fresh Meat is a delicious comedy/horror sandwich that’ll leave you more than satisfied. It throws just about every crazy and offensive idea at the screen for a silly bloodbath most messy and hilarious. This is without a doubt not for the faint of heart and is certainly going to offend a few individuals for the shameless nature of such deplorable acts. But, hey, if crazy cannibals are your thing, dig in.