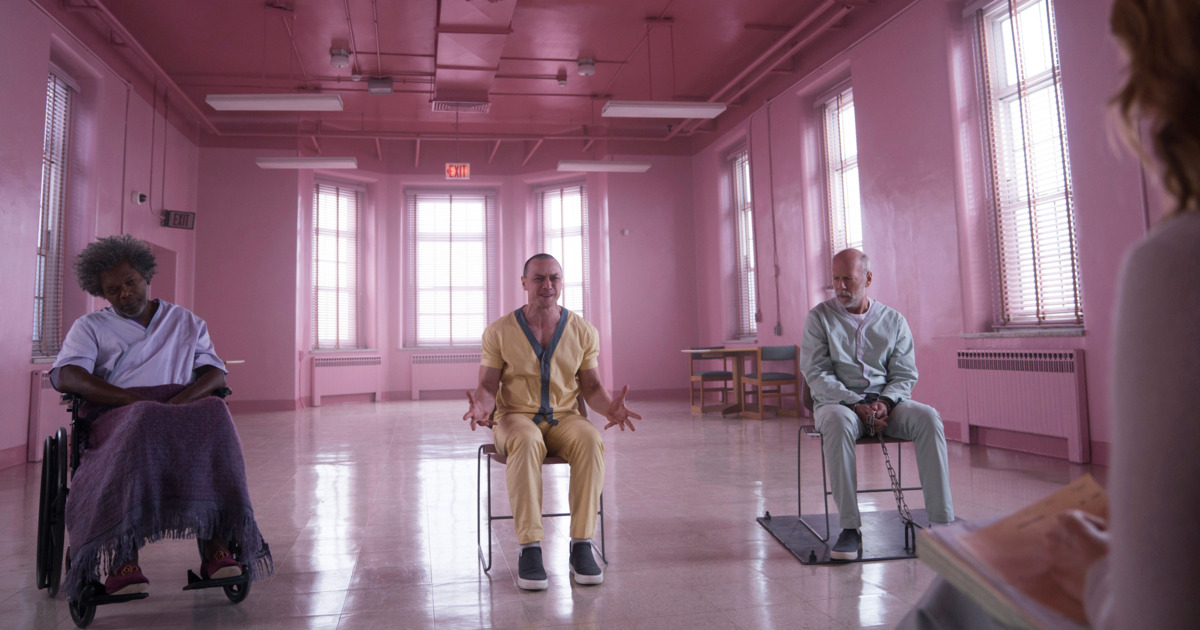 There’s a lot of potential in a film like Glass to be M. Night Shyamalan’s best film as a crossover of Unbreakable and Split. Assembled are three actors handed meaty roles of super-powered people with conflicting views of the world. All the ingredients are there for a brilliantly terrifying and insightful film of superheroes and supervillains but all Shyamalan seems to do with the material is throw it in a comic book pressure cooker set to the mildest of settings that even his twist comes off more disappointing than insane.

There’s an interesting angle present that feels woefully underused. Samuel L. Jackson returns to the role of Mr. Glass or so he prefers to be called. With a brittle body and keen mind, he seeks to bring the comic books to life and finds the perfect opportunity when some new visitors are brought into the institution he is imprisoned within. Bruce Willis has returned as the powerful Overseer and James McAvoy once more playing the split-personality Kevin, his dangerous and supernatural personality being The Beast. While a psychiatrist played by Sarah Paulson thinks the powers of these men are only in their heads, Glass knows the truth and believes it is the opportune moment for a battle of hero versus villain, probably someplace high and public for all to see.

While I’m grateful that Shyamalan treats this scenario with a refreshing subversion, one that I know for sure will piss off come comic book fans hoping for a grand finale, I wished that more had been said or a direction clearly taken. It’s tough to determine just what he’s trying to say about comic book culture, slinging around terms and history with all the clunky referencing of an episode of The Big Bang Theory. There’s an air of the absurd when characters start trying to unearth Glass’s plan by studying up on comic book lore, as though knowing the origins of Superman or how limited editions work will help stop his violent desires.

It’s a real shame the plot doesn’t go anywhere all the interesting when considering the exceptional action. Willis and Jackson spend most of the film subdued, trying their hardest to dust off these roles after 19 years lying dormant, but it’s ultimately James McAvoy who steals the show. His conflicting personalities not only make him the most interesting character but also the most unique in how he switches between them effortlessly. You believe him when trying to be the 9-year-old Hedwig babbling about Drake or the sternly refined woman of Patricia. I particularly dug his brief personalty of a film critic who mostly specializes in Japanese films from a select period of time.

For those hoping there will be a big battle of Willis trading blows with the insane McAvoy, you won’t be let down. Or maybe you will depending on how intimidating a screaming McAvoy in daylight can appear. Watching him duke it out with Willis in a parking lot while Jackson watches in a goofy purple outfit just made me think of an Asylum film attempting to replicate licensed superheroes with cheaper results. I couldn’t help but look at Kevin as some low-rent Hulk or Jackson as a lesser Lex Luthor.

Yes, there is a twist present, but unlike Shyamalan’s other films of his familiar trademark, the ultimate conclusion comes with a sigh for pulling something not all that surprising out of its butt. Glass is the type of film that keeps trying to raise the pot with its secrets and twists, where Mr. Glass always seems to have a counter to every trap placed, even the ones we don’t see or that come charging out of left-field. Part of what made me dig Unbreakable and Split so much was that they were genuine thrillers until ultimately revealing themselves as comic book origins. Now we’ve been given a comic book movie with no wacky twist shaking up the genre. But even with that safety, the sloppy climax ultimately made me nostalgic for the more farfetched twists that felt far less hokey and better inspired. The movie can’t offer much for being so stooped in comic book babblings that it merely becomes a gimmick of familiar characters thrown into a mixed-message battle of who can outsmart who and how hard McAvoy can punch Willis in the face. Glass may have been Shyamalan’s best film if it actually had something to say besides staging trapping twists and comic book battles.