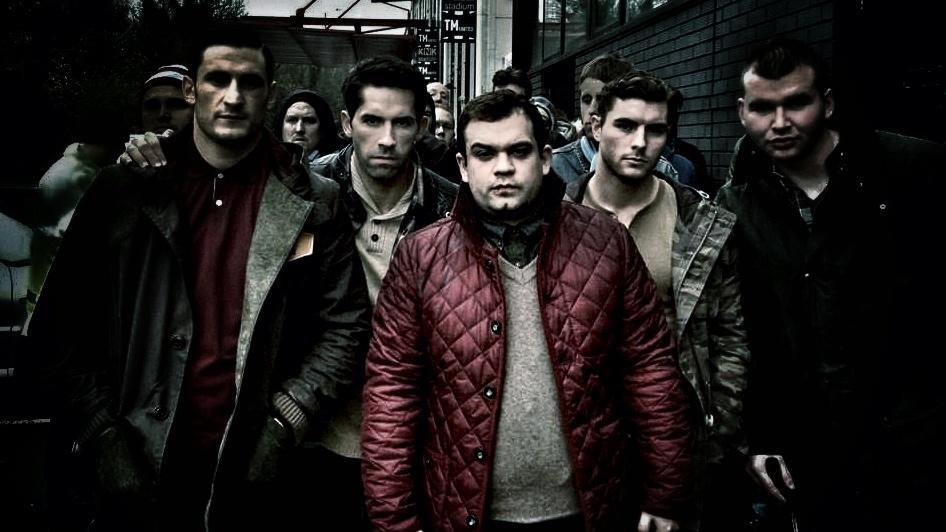 While there are many movies out there that attempt to satirize the cheese of macho sports flicks from the 1980s, Green Street Hooligans: Underground seems to be one of the most earnest attempts at recapturing that goofy charm. It whips out all the old clichés of the sports training picture from the driving jog through the streets to the slow passionate scene of lovemaking to the quintessential giant of a nemesis. The soundtrack even echoes that familiar sense of 1980’s synth. Since it’s all kept rather subtle, you never really get that feeling of it being a-typical of the 80’s sports genre until about midway through the picture. There’s something rather admirable about a film that can keep up such a tone without added camp. It almost makes its spotty storytelling worth viewing.

What helps keep its 80’s sports roots well hidden is its premise of focusing on the world of street fighting football fans. Danny Harvey (Scott Adkins) returns to his old stomping grounds of West Ham when his little brother is murdered. Determined to find his brother’s killer, he decides to delve back into the world he left. He sticks around the pub to hook up with the lady bartender and acquaint himself with the Green Street Elite of fighting football fans. Out of shape and overweight, they’re far from being the best when it comes to street rumbles with opposing football team fans. Danny decides to whip them into shape for the main goal of tracking down his brother’s murderer (I think). There’s also an undercover cop in all the fighting seeking to find the murderer as well (I suppose).

Most of the film is dominated by montages with music. The violent drinkers hit the gym for some much-needed exercises before the big fights. They lift some weights, punch some bags and do plenty of push-ups. The fights themselves are treated almost like tournaments in the way the film tracks each street match. They take place everywhere from steel cages in fields to abandoned buildings with flares for lighting. They go at it like dogs, kicking and punching wherever they can land a blow, in some brutally bloody sequences. And, of course, there’s the sex scene montage which isn’t all that erotic in the least.

The fights themselves are very frequent and quite graphic. Heads smash through car windows, faces are stomped on by multiple fighters and groins are smashed. There’s not much craft to any of these scenes though. All the training they do for these matches eventually boils down to who can hit harder and gang-up on the most people. I also found it rather amusing how they keep track of these fights as if it were some sort of fantasy football league. This makes me question why the film couldn’t just be a comedy. The montages are laughable, the fights are over the top and the dialogue is just a comical mess of cuss words. I just couldn’t take such a film seriously for how straight it probably wanted to play up the world of organized underground football fan fighting. Then again, I was never much of a fan of organized underground football fan fighting. Maybe I’ll try to catch a few games on ESPN and see if it’s my thing.

Green Street Hooligans: Underground truly does feel like one of those forgettable and silly B-movies from the 1980s you’d put on for a laugh. But since I’m not so sure the director was in on this angle, I’m afraid I have to call it like I see it. This is a worthy rental as a party film to mock with your best buddies over a few beers. As a legitimate action picture about underground fighters, however, you’re better off finding something a little more grounded.