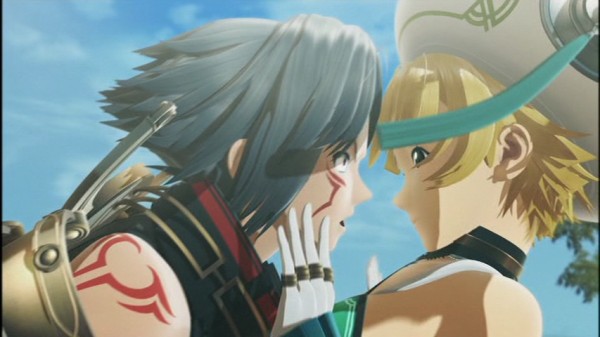 The world of .hack has grown far too meta and silly for its own good by the time it reached G.U. One glance at this movie and you’d swear you were watching a video game which is what .hack//G.U. happens to be. It’s a movie based on a video game about people playing a video game using video game animation. So even though you’re watching another cliche pastiche of anime action, it has the angle of being a video game that is hardly taken advantage of. But .hack can’t spend all its time trying to make its world a convincing online gaming environment. To do so means that the convoluted story would crumble under its own templated ambitions.

The online world of .hack//G.U. once again asks the viewer to put aside all semblance and rules of reality (literally). Pretend that the only way to solve an issue with video game users being thrown into comas with a video game is to actually go in the game and recruit players to solve this mystery. And by solve I mean wander around in the game and pretend to stir up drama. You can’t just shut down the game and debug this very serious issue. If the developers of the game did that, then we’d have no story.

The story is a-typical anime affair. Emotionally scarred hero befriends perky/shy girl. Girl is attacked by evil, emotionless man. Evil man and emotional hero fight for an extended period of time. I could make some ironic joke about how these fight sequences look like watching a video game instead of a movie, but I’ll keep it simple by just saying how blah the animation appeared. By 2007 standards, it’s not terrible CGI. In fact, it’s actually slightly higher on the scale of cel-shaded 3D animation. But it’s only used for moments of stilted dialogue and minimal-keyframe battles. It’s amazing how computer graphics can offer up something entirely different from hand-drawn animation, but this movie seems to be focused on replicating all of anime’s limitations – as if it were its own style to animating less.

There’s one big glaring problem with this whole setup and it’s that we never see the real world outside of this video game. It would really help sell the danger if we could actually see some of these players in reality being affected by the game and put into comas. Instead, the movie just expects you to take its word for it. For all we know, the characters we watch are not actually avatars of real people. They could all just be programs that are not aware of who they really are. We never see any of these characters not in the game so it’s entirely plausible.

As with all the .hack franchise productions, this title shares the same fundamental flaw of failing to take advantage of its own concept. You rarely feel as though you are witnessing a game world and more of a fantasy realm where sometimes an electronic display will pop up. In between all the dull-as-dishwater fights are some brief glimpses of creativity for the digital world. As a female avatar descends into a coma, she is confronted by ascending bubbles that burst with the snickers and gossip of those that judge the player in real life. There’s something here – something that could be capitalized upon to bring some character and world building to this anime. But the bubble bursts and it’s gone.

.hack//G.U. continues to expand the lore of its world and does nothing to bring outsiders into the fold. If you haven’t watched the previous anime series or played any of the .hack games, there isn’t anything to latch onto in this movie (or trilogy or whatever). On the basis for being so run of the mill with its design and story, I can’t find much of anything in this release to warrant even a rental.