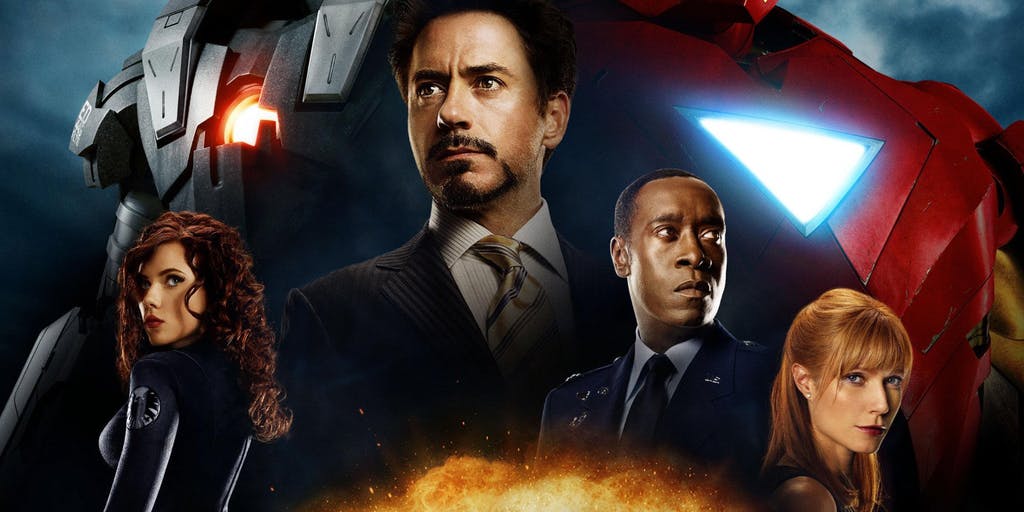 Robert Downey Jr. returns as tech jerk Tony Stark, using his energy-powered iron lung as a weapon. Tony is living the high-life despite his core polluting his blood. kind of like except it leaves cool circuitry-like vanes on your skin. Facing death, Tony does what any dying man would do: drive unannounced in the Grand Prix and drunkenly MC a party while skeet-shooting booze. As cool as that second part sounds, it’s truly pathetic. Not quite as pathetic as the “I’m a bad man” scene from Spider-Man 3 but close.

All this gains the attention of some new enemies. First, there is Ivan Vanko (Mickey Rourke), who is later known as Whiplash. Ivan is a Russian descendant of a wronged Stark Industries employee who seeks revenge for his dead father. Despite his poor living conditions, Ivan somehow manages to build his own energy suit, buy some phony passports, and track down Tony so easily that you also believe he could kill Iron Man on his sheer luck. Then there is Justin Hammer (Sam Rockwell), a seedy/incredibly ignorant CEO of Hammer Industries, a weapons manufacturer who wants to duplicate Iron Man.

Then there is the over prejudice and ridiculously crooked government represented by the nervous Gary Shandling. I’m not even exaggerating. Most of this movie is Tony Stark versus The Stereotypes, which surprises me while they still won’t include his oldest arch-nemesis, The Mandarin. Not to mention Nick Fury (Sam Jackson) and Black Widow (Scarlett Johansson) of SHIELD come down on Tony as well. Actually, they more or less just shake their head in shame at him and kick him a piece of the plot out of pity. Also, in case you haven’t heard, there is going to be an Avengers movie. The only one who sticks up for Tony is Pepper Pots (Gwyneth Paltrow) and James Rhoades (Don Cheadle). And even they get tired of his crap and desert him in the second act. Rhoades helps himself to an Iron Man suit as part of the bro-divorce.

So what’s the appeal of Tony Stark? He’s an alcoholic, has no respect for his safety or women, and he’s an all-around jerk. Well, he discovers a new element that cures his Iron Man illness. That makes up for everything right? Honestly, how many of you have ever built a Hadron Collider in your basement and made it actually do something besides blow-up the dryer? Meanwhile, Hammer and Vanko try to work together, but Vanko just screws Hammer over in the end, unleashing an army of robots on civilians. Cue Iron Man fight sequence with his side-kick War Machine. Cue teamwork against the villain. Cue after-battle witty one-liners. Cue AC/DC track.

But all that action is expected and I’ve no quarrel with it. What I can’t stand however is the baffling story structure. How is it that Rhoades not only knows how to get into Tony’s basement and equip an Iron Man suit but master all of its functions within a few seconds? Was Tony really that stupid that he built an easy-to-use suit? Even Nick Fury complains about this in the movie. By the way, there is going to be an Avengers movie

Also, Vanko is kept too mysterious for most of the movie. He pops up in the beginning to slay Tony Stark, gets defeated way too easily, disappears for the second act to tinker, then reappears in the third act to get his ass handed to him just as easily as it was before. Where is the fear and villainy I’m supposed to feel with this character? He’s like that odd hobo who tries to sucker punch people, but is too drunk and always falls flat on his ass trying to take a swing.

Let’s not forget that as cool as it was for Tony to discover a new element, he discovers it National Treasure-style by looking at old map plans. Of all the ways he could’ve discovered it, THAT is how he learns of the new element? Even worse, Nick Fury already knows about it and refuses to tell Tony while he is dying! Also, take Nick Fury and Black Widow of SHIELD out of the movie. YES, I know there is an Avengers movie coming! Shut up, movie!

Despite its deep flaws, Iron Man 2 still has much of the same elements that made audiences flock to the first one. There are some bad-ass robot fights, some extremely witty dialogue, and many moments of comedy. However, it doesn’t really give us any more than that. If that’s all you want, bless your sweet soul, but I don’t want more of the same. And if the Marvel movies want to continue to impress, they’re due for a major upgrade after this misstep.