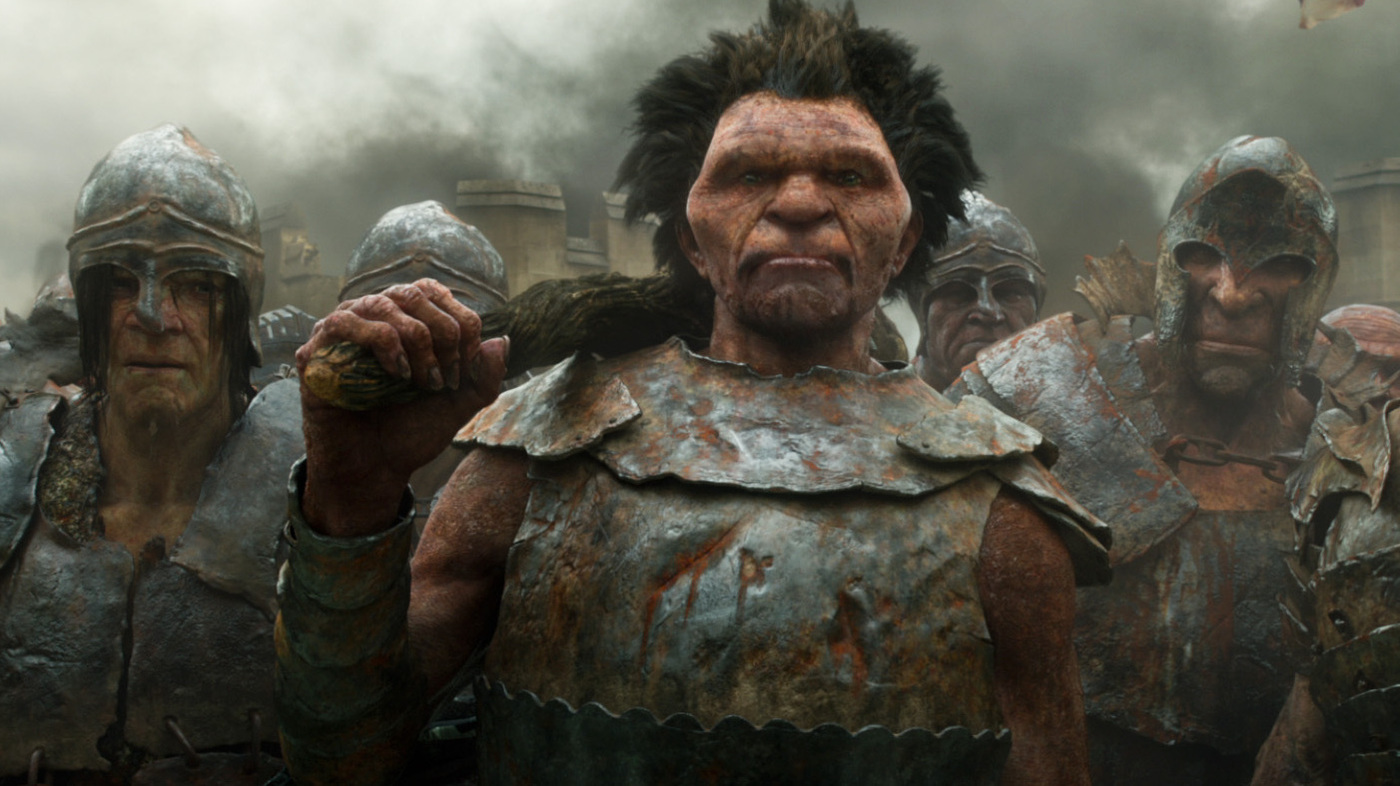 With the release of films like SNOW WHITE AND THE HUNTSMAN and HANSEL & GRETEL: WITCH HUNTERS, reimagined fairy tales are the current action/adventure genre du jour. Now director Bryan Singer (X-MEN, SUPERMAN RETURNS) weighs in with his expanded treatment of Jack and the Beanstalk. JACK THE GIANT SLAYER is certainly one of the more epic portrayals in this genre, but it also happens to be one of the messiest in tone, visuals and taste.

As one might expect from the source material, the story involves the hapless Jack (Nicholas Hoult) who sells a cow (or horse in this version) for some magic beans which grow into a beanstalk leading to a place in the sky of giants. But rather than swiping the golden goose eggs and harps, Jack has to save the princess (Eleanor Tomlinson) and stop a war of the giants. The giants seek a means of returning to the land of humans via beanstalks and due to Jack’s inability keeping things within his grasp, it isn’t long before there is a David-versus-Goliath battle.

With such a concept, one can expect a truckload of computer generated effects and Singer serves up a hefty helping. The quality ranges from great to downright awful. The opening sequence in particular is the worst as it attempts an entirely CGI-animated backstory of the giant legend. Most films tend to make such scenes look spectacular with a brilliant art style that lure you into the lore. JACK’s, however, feels more like a video game cutscene (and not a good one).

Thankfully, the star antagonists are the best-looking effect. The giants, with their otherworldly designs, are very detailed in that they’re filthy creatures covered with dirt and constantly displaying their bodily functions. The only thing grosser than their grooming is their dining preference for human flesh. Though it’s a bit infrequent in that one scene the giants simply eat humans whole and the next they’re preparing them like gourmet dishes. These deaths are entirely off-screen cutting just before the gory money shots, but it makes one wonder if this film was trying to aim for an R rating based on the gruesome implied body count.

In its questionable attempt at a swashbuckling fantasy, the plot becomes painfully routine. Most of the characters are incredibly one-dimensional and have such predictable arcs that stroll through the typical motions one would expect. It’s so unbearably spelled out who is in love with whom and who is going to betray whom that it almost feels like a parody. The characters could at least be likable, but they do little more than make a few witty, action-cliché quips before the next grand-scale VFX shot.

JACK THE GIANT SLAYER feels a lot like those fantasy films of the 1980’s that were heavier on spectacle than story. It has all the elements of a great fantasy film: a plucky hero, a princess desiring excitement, a fantastical kingdom and mythical creatures in a land above the clouds. Unfortunately, it plays things too by the book and the result is a middle-of-the-road fantasy flick. The movie delivers on most of what it promises, but never really breaks out of the expected. Though it does finally answer the question of what would happen if somebody ate one of those magic beans (and, geez, it is not pretty).

JACK THE GIANT KILLER is too cartoonish to be an epic fantasy yet too gruesome to be a family adventure. It almost feels like a weird compromise between the two audiences. For the most part, it’s just a visual ride with some keen sequences that will leave you mildly entertained. Think of PIRATES OF THE CARIBBEAN with far less charisma. The movie is most definitely worth a rental for eye-candy, but the story and characters are so forgettable that it does not merit a purchase.