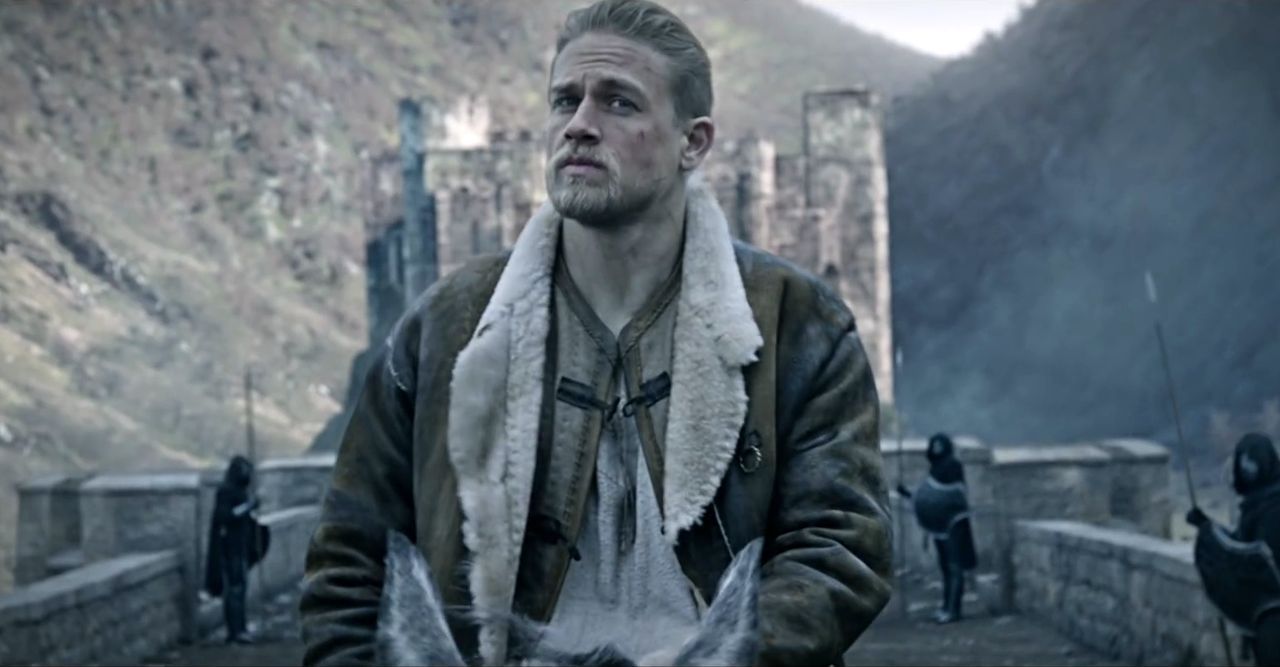 Guy Ritchie firmly establishes from the first few scenes that this won’t be the same old tale of King Arthur. Within the first minute, there’s already an attack on a kingdom by evil wizards leading a pack of gargantuan elephants that could trample castles. A king jumps into battle with his magical Merlin sword, decapitating his enemies with magic fury in his eyes. The king’s jealous brother (Jude Law) wants that power and is willing to strike a deal of blood with a female octopus monster to make it happen. And there’s a giant wielding a flaming scythe that savagely brutalizes anyone in his path. For as over-the-top as such sights are in Richie’s wild vision of the classic character, it could stand to be a little more crazy, a little more creative and a lot more Ritchie.

The film is at its best when the director pulls out his familiar bag of tricks for his first dip into this sword and sorcery genre. Ritchie seems to be smart enough in the beginning of the film to not waste too much of our time on Arthur’s origins as a child. Within a few minutes, there’s a quick-cut montage of how he grew up in a brothel, learned to fight at the local martial arts dojo (which are apparently a thing in the land of Londinium), saved up money from fights and started defending his foster mother from violent customers. This sequence quickly gets the plot moving towards the adult Arthur (Charlie Hunnam) when he’s fully grown, fully developed and ready to take down the evil king that murdered his father. That being said, Ritchie does continuously slow down the picture so that our hero can have continuous flashbacks of his parents being murdered, to the point where I could probably map the exact trajectory of the thrown weapons and the precise weather conditions of that fateful night. I wouldn’t want to, but maybe that was Ritchie’s intention given that there’s not much new information in the constant repetition. Unless there was a grassy knoll in the background that I missed.

As the plot powers towards its inevitable battle of massive armies and computer-generated fight scenes, Ritchie’s trademark style begins to dwindle in spurts of inspiration that grow further apart. He’s smart enough to skip over the monotonous training sequence on an island of monsters but still slogs through Arthur’s lamentation on his parent’s deaths. He’s skilled enough to stage exposition-heavy scenes for planning attacks to have all the flash and excitement of a heist picture but forgets to bring that same energy to the fight scenes that could use more clever editing and less slow-motion shots of swords clanging. And for as thrilling as Ritchie can stage a chaotic chase through the streets of a village, his sly wit doesn’t come through in the slower scenes that seek a laugh.

While the story begins to run out of creativity, so do the actors with how much they’re given to work with. Hunnam can make for a great stoic hero with his rippling muscles and emotionless face, but he doesn’t bode as well for the strategic leader the movie makes him out to be. Jude Law makes a great villain with his somber rage and eagerness to slit some throats, but he’s never given a true moment to battle our hero as he lets a CGI monster step in for him in the moments of action. There’s a great supporting cast here with the likes of Djimon Hounsou and Aidan Gillen, but they are never given much room to stand out in the roles. Most of their dialogue involves talking about Arthur, saving Arthur, protecting Arthur, taking arrows for Arthur and being astonished with Arthur. Does he even need to be king with such devoted followers already aiding him without much question? Arthur’s most powerful ally of a mage played by Àstrid Bergès-Frisbey, equipped with the most powerful of magic to command gigantic beasts to do her bidding, is cast so far into the shadows she is never once referred to by name because the movie didn’t give her one.

There was so much potential with Guy Ritchie bringing his eye-grabbing style of editing and energy to King Arthur that it’s a shame the movie ends up as a video game. For as earth-shaking as he makes the soundtrack for moments of combat and machismo, I still found myself nodding off as the direction quickly ran out of ideas, only mildly waking up for brief moments of inspiration. Even more disheartening is the plan for King Arthur to be a six-film franchise, ending the first film with Arthur assembling his round table and all his knight acting dumbfounded about what he has constructed. I almost wish the movie ended with the credit “King Arthur and his knights will return in King Arthur: Knights of the Round.” But that would apparently be too silly for a movie with giant monsters, mystic swords and demons from the deep. You don’t want to break the illusion for those eager students who believe they can watch this picture instead of reading about the true version of King Arthur.