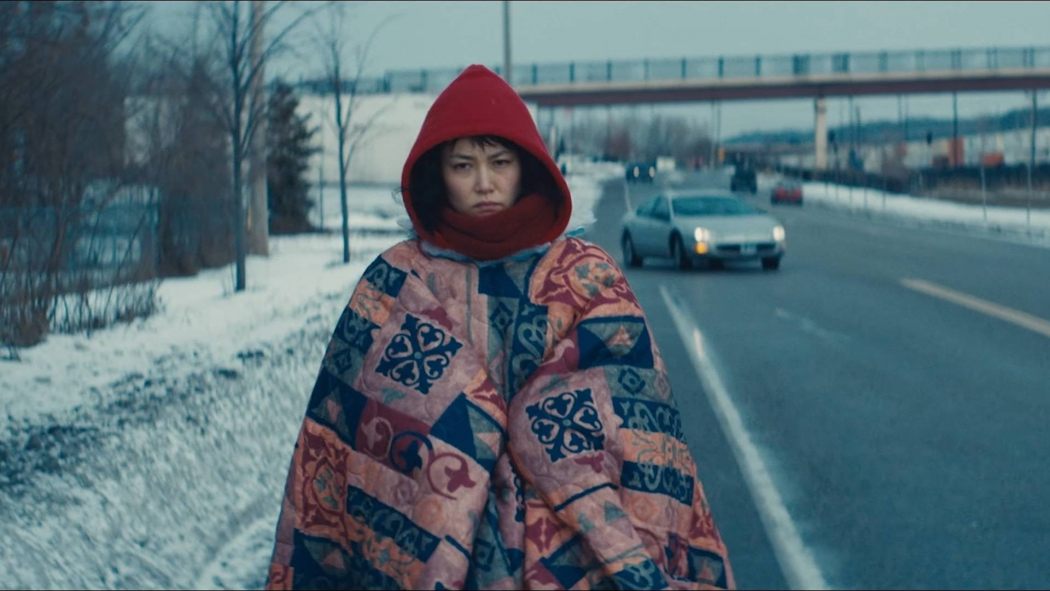 The legendary Coen Brothers movie Fargo begins with the false statement that this film is based on a true story with the names changed. Kumiko, a Japanese office girl, misreads this text. She has spent many nights endlessly analyzing her VHS copy of the film and is convinced that the briefcase of money left behind in the film must still be buried in a snowy Minnesota field. Her obsesession leads to a surreal and somewhat sweet adventure.

Kumiko, the Treasure Hunter is based on an urban legend from Minnesota where a Japanese woman was lost in the cold. The decision to equate this story with treasure hunting and the movie Fargo may seem odd but it does seem in line with how the Coen Brothers would usually stage a quirky piece of drama. Kumiko is quiet and uncomfortable with her life as a Japanese office worker. Her bosses harass her, her co-workers are annoying, and her mother will not shut up about her getting married. She has nobody to confide within; nobody to comfort her in her closed and suffocating environment. Even her quest for learning more about Minnesota and the exact spot of the briefcase leads to tragedies of being kicked out of the library and her VHS copy breaking, forcing her to upgrade to DVD.

With nothing to loose, she steals the company credit card and takes off for Minnesota. She understands very little English but decides to make the trip and finally find that elusive briefcase that doesn’t exist. Nobody bothers to tell her it’s fake because nobody cared enough about her to ask, but even if they did, she wouldn’t believe them. When she arrives in Minnesota, she gets the Minnesota Nice treatment. People at the airport gently point her on her way and a kindly rural elder takes her in for the night. Even a policemen tries to be understanding and carefully breaks the news about the movie just being a movie. She finds more honesty and love through strangers of the Midwest than her family and co-workers of Japan, who continue to hound her even after she leaves, only taking note when she goes AWOL.

There’s a quietly quirky nature to Kumiko’s adventure that never goes for laughs too hard at her expense. Her quest is doomed, naturally, and not just because the later-released Fargo TV series more or less answered the question of the briefcase, if we’re to stick to the lore. But because we spend so much time with Kumiko and understand her unfulfillment, there’s a twinge of desire that she truly does find that briefcase. We often like to escape into movies and sometimes believe they offer up more than a mere occupation of our time for escapism. Kumiko’s journey, though guided by false information, is a relatable one for seeking a solution to the desolation of the office lifestyle.

Rinko Kikuchi plays Kumiko with an admirably adorable nature in her silent fascination and longing for more. She is the heart and soul of a dead-pan delight of a film that is just heartfelt enough to make anyone hope the events of Fargo were true enough to grant wealth for those seeking it. Her performance alone makes this little film a beautiful treasure worth seeking out.