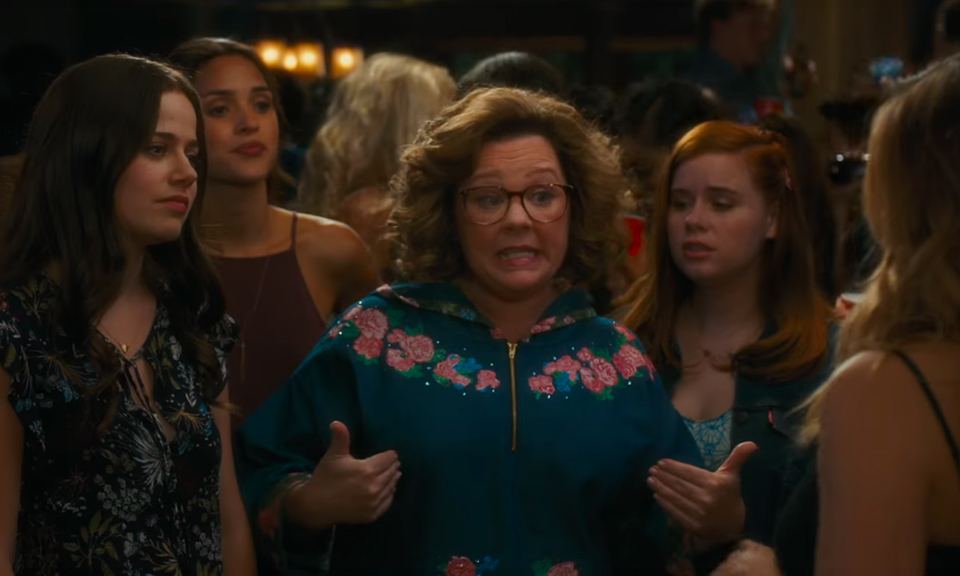 Color me impressed that Ben Falcone has managed to conceive a film for his talented wife Melissa McCarthy that gives her a platform to be funny AND likable. She plays a woman so full of charm and pep that it’s easy enough to pull for her plight while she saunters through with silly. She’s perhaps too adorable in her Back to School style narrative, but after suffering through her most unlikable of characters in Tammy and The Boss, a comedy this light in premise and whimsical in humor is a breath of fresh air. The third time is most definitely a charm.

McCarthy plays Deanna, a mom of familiar fashion. She proudly boasts her bright curls, big glasses, and bedazzled sweaters with glee. She’s patient and loving of her family, from her college-attending daughter Maddie (Molly Gordon) to her stressing husband Dan (Matt Walsh). So when she’s quickly hit with Dan desiring a divorce, it’s easier to root for her act of burning all his stuff. But ever the positive mother, Deanna takes the higher road of going back to college and finishing her degree she never completed. By comedy law, it must be the same college as her daughter and they must cross paths consistently on campus.

From that setup, this comedy could have become tired quick, slinging in the expected elements of mom’s dated lingo and a plot that somehow leads to a showdown of the popular kids versus the outsiders. All the ingredients are there, but McCarthy and Falcone stir up something far more palatable. They’re wise enough in their script to realize that an experienced mom who stops by a sorority with donuts and lasagna would be a hit with the youthful college students. It’s also easier for Deanna to wedge herself into college life when surrounded by girls just as strange and hilarious as she is, maybe more so. She’s dealing with girls who don’t exactly need a makeover to be a hit at college, but a gentle kick in the panties to get out there and show the world they’re not too weird to go to parties or embrace their major. Even Maddie seems to dig on her mother’s vibe quite quickly considering how mom can still muster a smile after such a devastating separation.

Backing up McCarthy is a bright ensemble of comedians that all get their moments to shine. Maya Rudolph swallows scenes whole with how she becomes the loudest and funniest voice in the room as Deanna’s short-fused friend, never afraid to speak the commentary the audience is thinking in any situation. Matt Walsh fits snugly into the role of a jerk too meek and pensive to be as sinister as his actions. Chris Parnell is in his element as the understand college professor that can’t stop marking archeology puns only the most devoted of students would find funny. And it’s a fun change of pace to watch Stephen Root explode on the screen as Deanna’s overreacting father that is one slightly-heated argument away from whipping out a pistol.

Despite maintaining a consistent grin factor, however, the film does still fall into some expected conventions while still trying to avoid cliches. There will be a romance that forms between Deanna and the handsome young male student met with equal parts romance and grossness. There will be some classic style mean girls that try to kick down Deanna’s hopes, despite appearing as the lesser villains when college life is already tough and Dan’s new wife is the ultimate in cartoonishly orderly man-stealers. There will be a dance number, but McCarthy rocks that Dynasty outfit so well it’s certainly not something to skip. And while I did admit to the film not ending with a competition, it does climax with a fundraising party where musical guest Christina Aguilera is inexplicably worked into the finale.

Life of the Party may play it relatively safe in its caution of trying not to be a Back to School knock-off, a preachy age-gap commentary, or an insufferable journey of an unlikable character, but it has a cute factor that won me over just enough for McCarthy’s smile to be contagious.