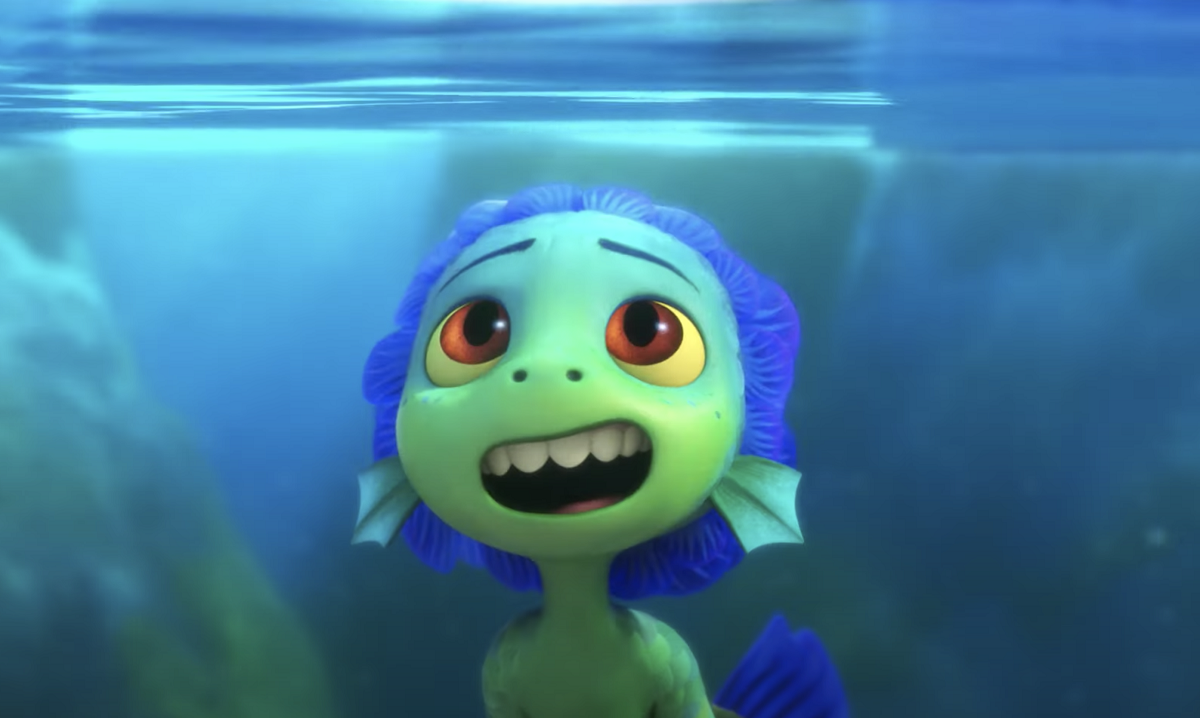 It shouldn’t come as a surprise that Pixar’s latest mixture of real-world locations and fantastical characters is bursting with charm and heart. It may surprise some, however, that Luca may not have enough of the bolder ambition that adults have come to expect from the studio’s gutsier features. There’s no contemplative nature on looking into the core of our existence nor is there some dagger of tragedy wield that will only pierce the heart of parents. Luca is simply a summer getaway of a picture for the kids who just want to enjoy an adventure without the headier elements Pixar is known for. This doesn’t exactly make the picture richly fulfilling but it’s far from being animated junk food.

There are smaller targets and greater whimsy present in such a story as we follow the underwater sea creature Luca (Jacob Tremblay). Raised under the sea, he has been taught by his parents to fear the topside world of dangerous humans. Luca, being a good boy-creature, takes note and doesn’t entertain that lingering notion that maybe there’s something more to life that lies above the waves. Alberto, however, is an orphaned sea creature who thinks nothing of making regular trips up to the surface world, acting as his second home. After running into Luca, he manages to push him up on land and explore all its wonders.

Luca learns about the dry world and that transforming into a human is as simple as drying off. Walking is a bit of a challenge as is the concept of gravity. With Alberto’s teachings, he starts to get the hang of it. Luca is also let on the most attractive vehicle ever invented: The Vespa! They can acquire one if they can win a race in the local Italian town. To win, however, they’ll need to best the reigning champ/bully Ercole and their only hope may lie in the eccentric Giulia. Of course, they’ll have to avoid being discovered as sea creatures, as well as avoid Luca’s parents (Maya Rudolph, Jim Gaffigan) searching for their missing son.

The setting of Luca as a summer adventure makes for a solid coming-of-age tale. The friendship between Luca, Alberto, and Giulia develops quite well with the many aspects of desiring more and fearing you’ll become the third wheel. The staging in such a bright and vibrant town gives the film a certain tender approach to addressing familiar childhood fears of not belonging, whether it’s for the color of your skin or the changing goals in life. Sure, the posing of such allegories is not all that subtle or original, especially for a Pixar production, but these themes are presented simply enough that there’s not a lot of over-the-headedness present to make the adults stare at their enthralled parents with confusion. You may have to explain to your kids why you cry at the beginning of Up but you won’t have to relay why Alberto feels isolated the further he drifts from Luca.

Here’s a shocker for nobody: Luca looks great. The Italian town has a charm all its own a circa-1950s vibe as citizens bustle around on bikes with radios and takes to the sea with simple means of fishing. I particularly dug the look of Giulia’s stoic father with his eyes and mouth hid behind hair, yet his heart bares by his actions. He’s skeptical and quiet but also welcoming of those who know their way around fish or can help out around the house. His cat also harbors similar features and its with this exagerrated feline where the Studio Ghibli influence seems most apparent.

For the moment, Luca appears to be an underwhelming Pixar entry that may just be destined for underdog status in its pantheon. It has its cute moments, the humor is a decent variety of slapstick, and the colorful town was a charm all its own. It’s a pleasing Pixar production that is probably not going to be as revered in numerous think pieces or end-of-the-year lists, though it’ll probably gain ire for most certainly being nominated for an Academy Award. But there’s just such a simplicity to the film that makes me adore it on a level far different from its competition that I hope it’ll resonate for the audience who grows up with the picture.