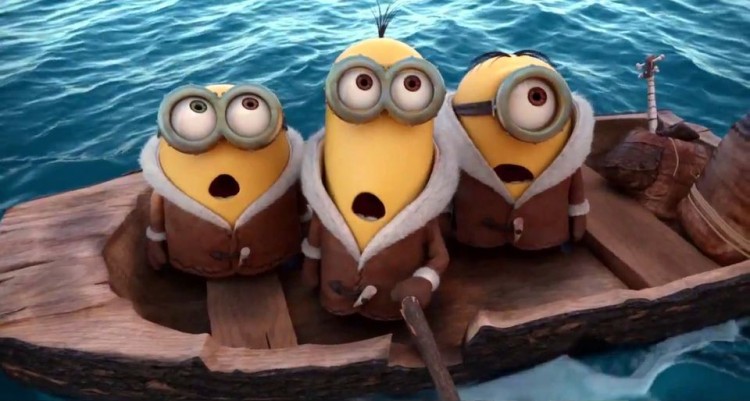 Oh, how the movies of the yellow minions frustrate me so. While Despicable Me was decently cute, its sequel did little to improve on its cheap premise and animation. As such, these movies will never improve and only exist as cute little excuses for squat slapstick. The latest movie with the pill-shaped, pint-sized characters only displays how much more downhill this franchise can go.

As a prequel to Despicable Me, the movie focuses on the origins of the minions. Born from the primordial age, they have existed since the dawn of time as followers. Whoever is the most evil and domineering, they blindly follow with loyalty. Unfortunately, they seem to always end up innocently bringing the demise of whoever they follow. This makes the minions constantly on the lookout for their next master over the course of centuries. This story seems to imply that the minions are immortal and probably have to find a new master when Gru dies.

But Steve Carrel’s Gru is absent from this story as we’re revealed one master prior. In the 1960’s, three minions venture into the United States to find the top villain they can serve. The hottest player in the evil villain game is a woman by the name of Scarlet Overkill (Sandra Bullock). She proudly boasts about being the top villain when some villain patriarchy apparently said that a woman could never be the baddest of the bad. And that’s about all she has to offer as a character. Sure, she’s greedy and has a master plan to steal a crown from the Queen of England, but there’s not much more to her than being a cackling antagonist. I guess her dress is kind of neat in that it has rocket boosters to make her fly, but cool toys do not a good character make. Scarlet sends her yellow minions on a mission to England, a location that’s reaped for all the most of Saturday morning cartoon gags. Everybody drinks tea, speaks in thick accents with bad teeth and are at least a century behind the setting of the 1960’s.

Without any decent human characters or setting to work with, it’s entirely on the minions to save yet another movie. In their own language of babbling, they pull out all the slapstick tricks they can perform in animation. Their antics are equal parts clever, ridiculous and adorable, which could describe the three key minions respectively. The tallest is the brains, the hairiest is the bravery and the smallest is the cuteness. But they don’t have much more to offer. This would be fine for a series of five-minute shorts, but they just can’t sustain a feature-length movie on their own. It’s the same reason why Tweety Bird doesn’t have his own movie – Tweety is funny, but not when shoved in a bland script and expected to pick up the slack entirely on his own.

Minions is the biggest argument for an animated series and no more solo feature films for these guys. Every moment the minions are on screen is pleasing for a few minutes of universal humor – every moment without their antics makes the movie grow tired and by-the-numbers. The one high point of the picture is when the three minions hitch a ride with a family of villains that shoot up cars as if it were a road trip game. Those were character that had promise to be paired up with the minions, but are only used for a few gags in the first act. By the end of the picture, both the script and the audience comes to the same conclusion: the minions need Gru.