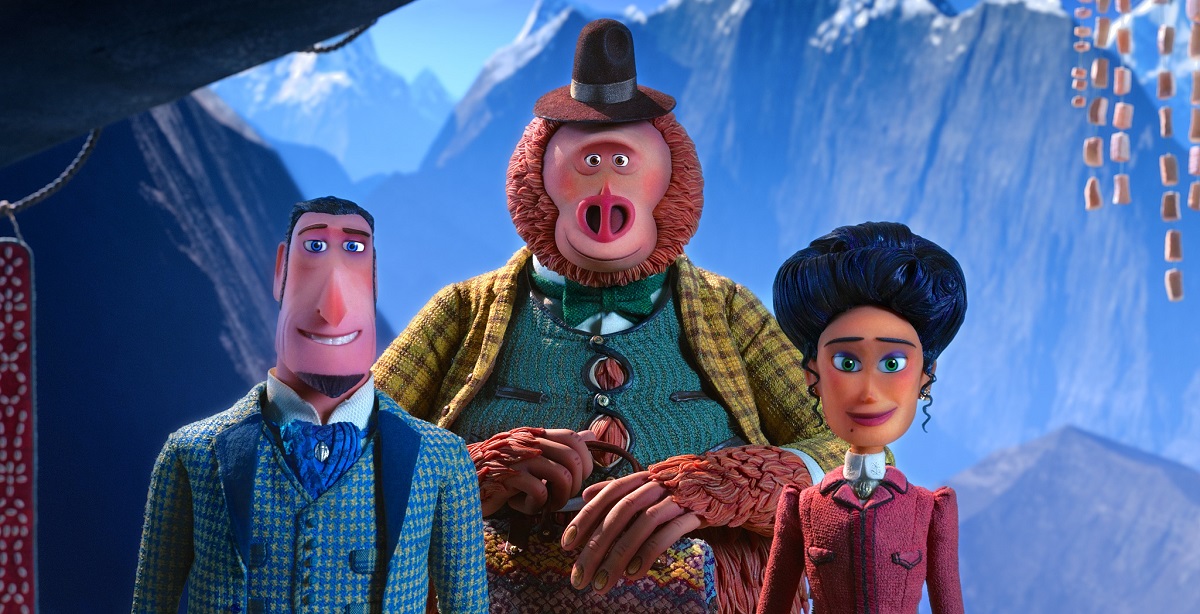 The Laika animation studio continues to churn out some of the most original and boundary-pushing of stop-motion animation. Their previous works include the culturally creative Kubo and the Two Strings and the exciting horror ParaNorman. While Missing Link isn’t quite the same level of a masterpiece, it does go to show how the studio can take something as familiar as a human/monster buddy comedy and weave something genuine, hilarious, and heartfelt with amazing visuals.

The film follows Sir Lionel (Hugh Jackman) on his quest to become a recognized explorer of London’s upper-class club of adventurers. Lionel’s methods, however, involve unearthing mythological figures that the society doesn’t believe he will find. Of its members, Lord Piggot-Dunceby (Stephen Fry) wants to ensure these discoveries won’t be found as it’s a threat to the natural order of both the club and society. So when Sir Lionel finally receives a hot tip about Bigfoot in the United States, Piggot takes no chances by hiring a bounty hunter after him, Willard Stenk (Timothy Olyphant).

When Lionel arrives in Washington state, he’s amazed to discover just outside a logging community is the legendary Sasquatch (Zach Galifianakis). Those big, hairy, and hefty, the monsters seems surprisingly tame and intuitive, despite his lack of reading figures of speech. He can write, form sentences, and has a rather gentile and well-meaning nature, a shock for both being a Bigfoot and voiced by the usually loud Zach Galifianakis. Sure, the character is capable of slapstick; why wouldn’t he be? He’s over 600 pounds and eight feet tall, meaning he’s going to crack a few chairs and bump into a few chandeliers. But he generally tries to do the right thing in his cautious manner of wanting to find friendship.

Lionel and Bigfoot go an adventure across the globe to find the big beast a home in exchange for Lionel having prove of himself being a validated explorer of discovering monsters. And it’s one filled with much exciting action and plenty of unique characters along the way. They team up with widowed adventurer Adelina Fortnight (Zoe Saldana), seeking to prove herself as well as kick Lionel’s egotistical ways that has forced him into a solo position. A Yeti voiced by Emma Thompson may be the key to Bigfoot’s salvation but she’s a bit stuck in her ways in a manner that could hurt the confused monster with his perceptions of the world. And there are other colorful characters of the world including the quirky mountain guide Ama (Amrita Acharia) and the cowering English follower Mr. Collick (Matt Lucas).

The stop-motion animation is unlike any other studio, keeping the Laika tradition. Whereas the works of Aardman and Wes Anderson have a more rustic charm to embracing the smudges and jerkiness, Laika always has a smooth and seamless sense of beauty. The characters all have a very distinct and varied look to their appearances, from the angular Lionel to the rounded Bigfoot. The environments, from a Western logging town to the mountains of the Himalayas, all look spectacular and there’s plenty of room to marvel at their allure. Laika’s centerpiece, at least the one reserved for a behind the scenes look in the mid-credit Easter egg, is that of an elephant escorting the characters across a lush jungle, the sets being built around the characters being animated. It’s a great reminder of how much work went into making such a picture.

Missing Link is just downright charming if not as high on the Laika ladder of quality animated films. Its drawbacks of blunt themes and easy slapstick can mostly be forgiven because A) there’s an honesty to its assembly that always generates a smile and B) it’s for kids. And kids deserve a film such as this; good-natured with hammered messages, vivid with its robust animation, silly with its humor, and well-meaning with its characters.