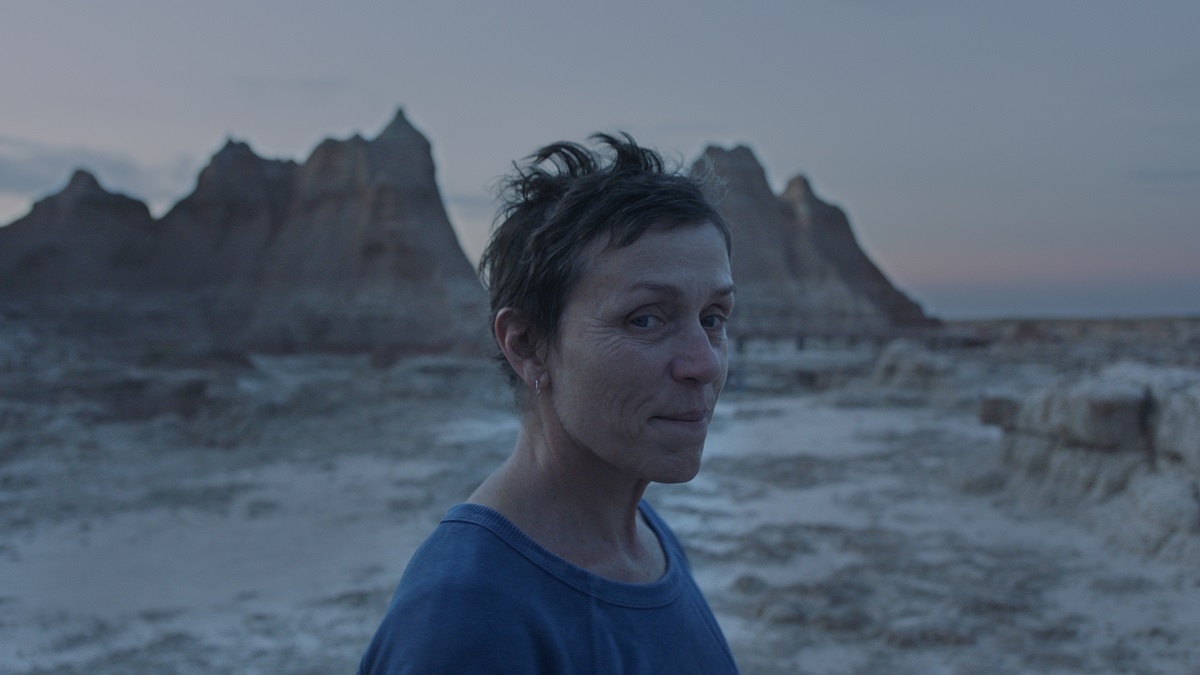 The most beautiful and elaborate scene in Nomadland features Frances McDormand walking at dawn. She strolls past a few other parked cars and trailers amid a collective of nomadic people. She waves to a few and briefly says hello but keeps to herself. She moseys over to the noisy road, watching the cars go by as the sun begins to rise. It’s a sight she’s most likely seen many times over and yet it’s such an infatuating moment that is held by McDormand’s constant contemplation that always seems to be drinking in everything around her.

McDormand plays Fern, a woman who finds herself adrift in 2011. Things have gone so bad in her hometown of Empire, Nevada that the town has been abandoned. With her husband dead and no way to pay for her home, she sells her belonging and sets off on the road in her van. She ambles from job to job, taking gigs everywhere from Amazon warehouses to the Wall Drug kitchen in South Dakota. She thinks little of her situation, taking it in as just something she has to do to keep on kicking. As she states to an employment agency, she would rather work than retire. And with little to offer such an older woman, she scrounges around for whatever job she can take, seeming less out of desperation and more for purpose.

She’s not alone though, despite spending most of her time on the road with nobody to talk to. She runs across a group of nomads in similar situations of similar ages. They all swap stories and items, letting them in on tips about where to park and what’s the best bucket to have for going to the bathroom. They eat meals and gather around fires, sharing in a natural gathering of people far off from the usual speed of civilization. They leave society behind but take the good parts with them, be they tangible or not. They’re not seeking to create some new world off the grid but just live out a life of constant movement and new adventures.

A sense of community from the gatherings gives her small moments of comfort, meeting familiar strangers on the road. One person she keeps running into is David (David Strathairn), a man who cautiously tries to let her into his life. Such a relationship seems too tough for Fern and not just because of the uncertainty of where they’ll be in the next week. Having already had a rocky relationship with her own family, Fern isn’t so sure she’s ready to let anyone else get as close to her ever again. There’s a moment where Fern seems to be offered the perfect chance to be taken in by a loving home and there’s a somber sensation coursing throughout her body, telling her this is not her life and that it never will be. She lingers for a bit before setting off once more.

Director Chloé Zhao aims for crafting a very authentic piece of Americana that aims to make every scene feel raw and relatable. This is mostly due to a slew of non-professional actors that are added into the mix, many of which are true nomads. The film takes on a unique mixture of fiction and documentary from his angle, letting the camera linger and meander around scenes that still drive the story forward but seem to go whichever way they please. Zhao builds her film around these types of peoples, working them into the portrait of America that rarely seems to be seen.

Nomadland is a film that takes its sweet time with its contemplative nature. Yet it’s a surprisingly fast film considering where it lingers and where it cuts. Scenes where Fern and David find themselves drifting together are cut quickly whereas moments of absorbing the morning wonder are given plenty of breathing room. Through its ambling nature, the film finds the importance of people and how they seem to come in and out of our lives in ways that we can’t control. Maybe we don’t want control, choosing to let life be a constant surprise. Through patches of loneliness and talks both tender and tough, life can sometimes seem like a series of blurs that it can be comforting to pump the brakes for a moment, even if just to stare back at the blur for a moment of meditation. Zhao’s film lets the audience take in that painful ecstasy with a fantastic performance by McDormand who says so much about the American experience with little more than a weary gaze into open nothing.

One thought on ““Nomadland” Review”