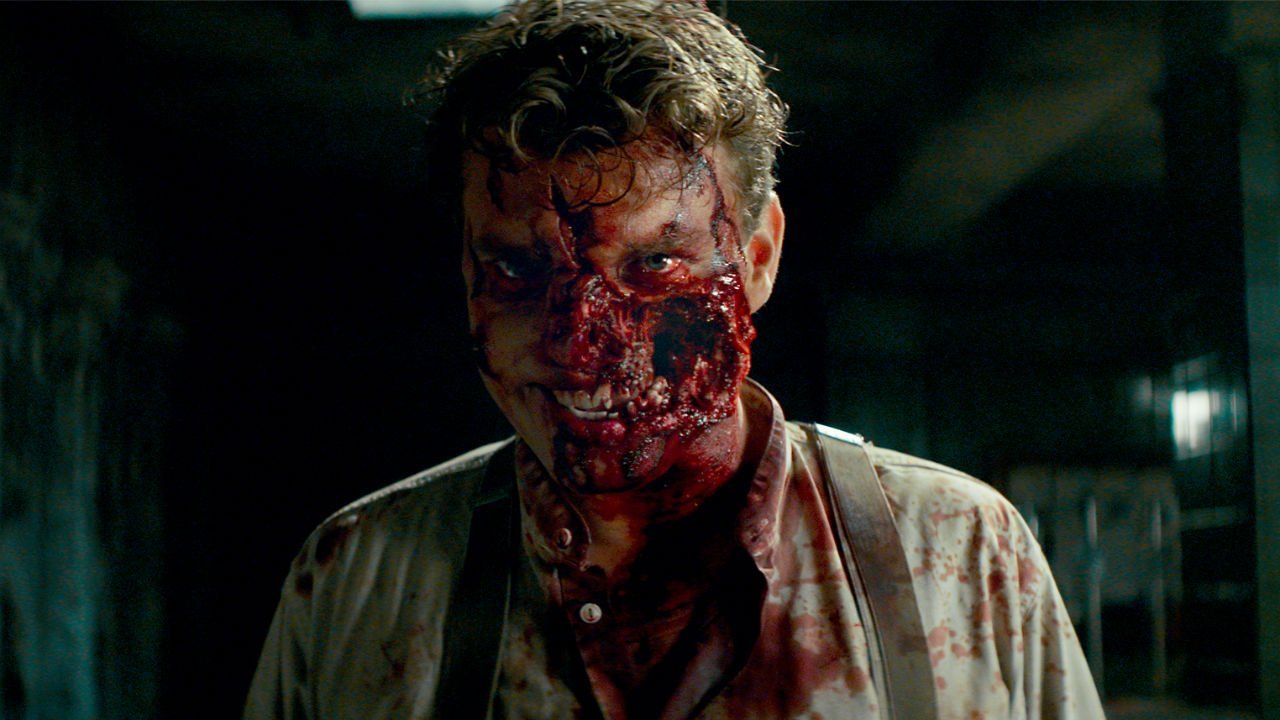 After having been beaten over the head with the absurdity of Nazi zombies in the likes of Wolfenstein and Dead Snow, along comes Overlord as the boldly brutal and earnest take on this odd little subgenre. It’s a bloody romp of bullets and monsters, yet never feels the need to come loaded with winks for the action. There’s enough trust that you’ll have fun with a half-faced Nazi villain and a kick-butt French villager brandishing a flamethrower.

There’s a great build up to the gruesome revelation of the Nazi experiments by staging the initial mission as an intense war picture. We get to know a handful of the soldiers on a mission to take down a German radio tower in French territory. Well, before most of them are shot up in a grizzly and intense battle in the skies. Few survive, the most notable of the handful being Private Boyce (Jovan Adepo), the more peaceful soldier that fears becoming as bad as the Nazis, and Corporal Ford (Wyatt Russell), not so worried about becoming a Nazi so long as he gets to punch one real good. And he has the perfect target with the sinister Captain Wafner (Pilou Asbæk), a classically evil Nazi that never hesitates when it comes to shooting French villagers in the street or raping a woman behind closed doors. So how could Ford resist torturing this guy and later beating the guts out of him?

For the first half of the movie, it’s a straight war epic. It’s violent, character-driven, and stages the war with a sense of genuine intensity. What’s most surprising when Boyce ventures inside the radio towering during the second act and discover the Nazi’s secret dungeon of horrors isn’t so much the shifting of genres but the maintaining of tone. We’re caught off-guard by the sight of hideous mutations and bodyless heads that are begging to be killed but not so off-put that we can’t still enjoy the ride. The mission to take down the tower hasn’t changed; they just have to blow up the lab as well, which isn’t easy when Wafner decides to take a hefty helping of the super-soldier serum to keep the flesh on his bones and a little oomph to his punches.

The film has plenty of grit and gore to spare, including a vicious throwdown of Nazi zombies versus determined Americans, but also has a strangely subtle nature in holding back from flying off the rails. Take for example the befriended French villager of Chloe (Mathilde Ollivier). We first see her as a woman who has lost much of her family to the invaders and would hope to not lose more. By the third act, she has lost all fear and picks up a flamethrower to scorch a screeching Nazi into ash. A lesser film would’ve added some corny catchphrase here but there’s no need; it’s cool enough to watch Ollivier turn badass without ever saying the word badass.

The zombie aspect is also held back just enough so we’re more terrified by the experiments than tantalized with a slew of zombies fit for figurines. Boyce only sees a taste of the Nazi’s prisoners turned monsters and they’re pretty frightening when witnessed in the darkness, screaming for death or eager to cause it. Don’t worry if you’re seeking violence, however, as the film makes great use hooks for a fight and body horror for a nightmarish series of contortions.

Overlord is a gooey grit-fest that never overloads on the over-the-top. And it very well could have. I could think of a number of directors that would get so giddy to play up the camp value to a ridiculous degree but director Julius Avery keeps those desires in check. He knows his audience doesn’t need their hand held when it comes to appreciating body horror, monsters, firefights, and a mad dash out of an exploding building that Michael Bay would’ve loved to have shot from a low angle. No need for the exposition or punctuating jokes; just sit back and enjoy a melty-faced Asbæk trade scowls and fists with a determined Russell.