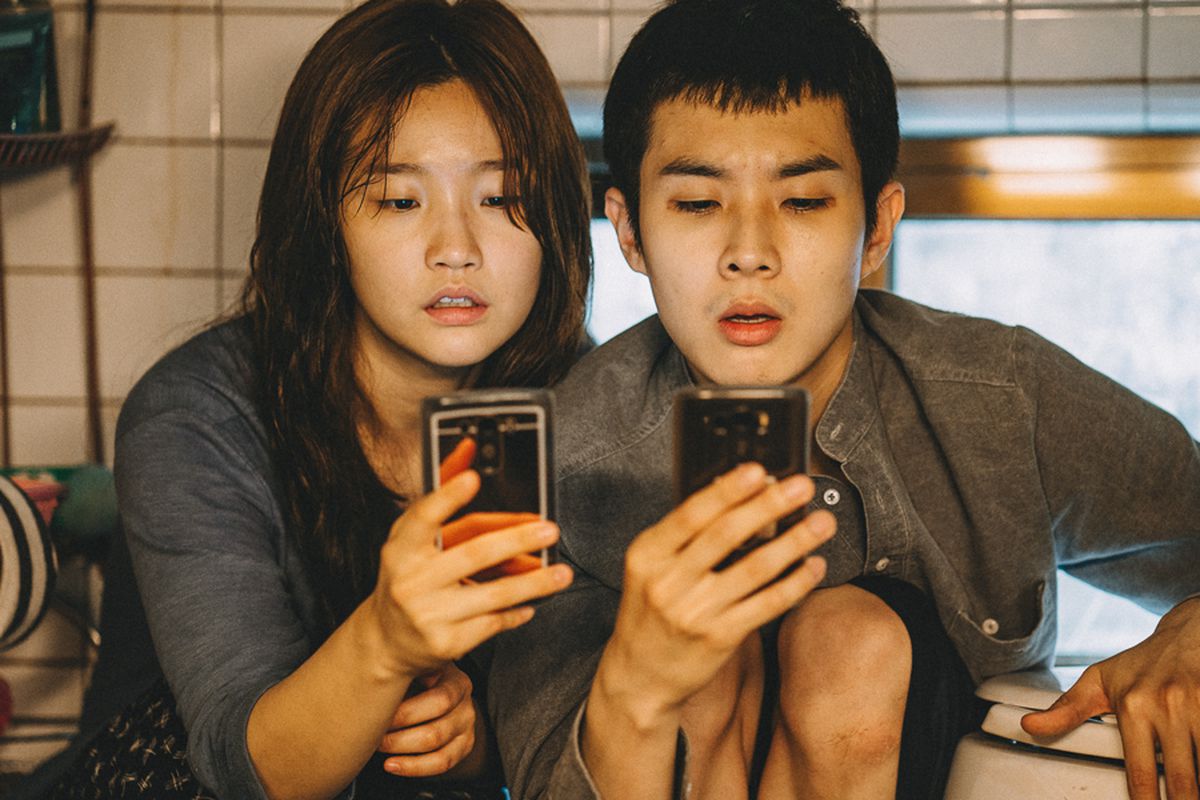 While Bong Joon-ho’s filmography boasts much of the fantastic, most of them carry a scathing criticism of the class structure that damages futures and society. There’s no missing that commentary in Parasite, shoving it into our faces with uncomfortable catharsis. Blindsiding the audience as a dark comedy, this story takes one hell of a twist that shifts a poor family from being grateful for employment to disgusted with despair for a world that has wronged them. Where other films only tap-dance around class struggle, Parasite steps on its throat.

We’re introduced to the Kim family of a husband, wife and their two adult children. They live in a dump of a basement apartment. Bugs are running rampant in their interior. The toilet is placed in an awkward space. They leach off of local wifi for a signal. Despite all of them having some talent, the only job they can find is folding pizza boxes. Life sucks for them. Something needs to change.

When the son, Ki-woo, happens upon a gig for teaching English to a teenage girl, he finds his work environment is the astounding home of the wealthy Park family. With an easily gullible mother, Yeon-gyo, it’s easy enough for Ki-woo to lay on his lessons thick. Even better, he believes he can convince the rich folks to hire his sister, Ki-jeong, as an art teacher. She doesn’t know a lot about art but she can look up just enough psychology to make anyone believe she’s an astute teacher. Ki-woo, of course, won’t tell the rich people this woman is her sister. He’ll later conspire to get his mother and father jobs as well, acting as housekeeper and driver respectively.

Life seems good for the Kim family, with the father, Ki-taek (Song Kang-ho), taking the most pleasure. He can enjoy the little things in life, be it wifi or that his children are smart enough to find a way into the good life. He’ll later remark at how much of a relief it is that in order to keep the money rolling in, all they have to worry about is being noticed as a family when on the clock. But Ki-taek can’t shake his distaste for the rich. When accidentally spying on the successful husband, he’ll discover that his employer can’t stand the smell of poor people like Ki-taek. How do you shake that feeling? That knowledge that your boss always looks down on you, literally sticking his nose up at your presence. You can’t stop thinking about it. The bitterness boils over in Ki-taek, due to boiling over in a horrific display.

Parasite initially catches the audience off guard by easing us into the picture as a dark comedy. We like the Kim family as underdogs that weasel their way into the good graces of the elite but with a bittersweet fascination. Consider how the father only gets in after the driver is accused of banging women in the family car and how the housekeeper is sacked for having TB. These are false accusations but the Kim family stages them so well. The film presents these escapades as more amusing for their assembly than tragic for their viciousness in struggling to survive.

By the time the second act rolls around, there’s a brilliantly bleak twist thrown in that makes the Kim family not only question their tactics but the audience question their humor. Can we really laugh when such antics damages others and ourselves for the vicious cycle of preservation? The Kim family, despite their creativity, can only attain employment if they kick someone else down. You can only kick so far down before someone kicks back. And, wow, does this film kick hard, never providing an easy out of this nightmarish scenario.

Parasite takes such a tragic and grizzly turn for the worst in its many twists that I dare not spoil such a stellar story. It’s a brilliant commentary on the nature of class that only crumbles when we dare not look, preferring to bury such empathy and niceness. There’s plenty of great quotes in the film but one, in particular, is unforgettable: “Rich people can afford to be nice.” The Park family don’t have to think about where their next meal will come from or worry about having to lose their home due to bills or nature. The Kim family does. They have to lie and frame their way into survival. Niceness doesn’t get them paid. Niceness gets you in the gutter. When humanity takes a back seat to finances and stability, what more is left? Just plans that may or may not work. And as Ki-taek so perfectly says, “the perfect plan is no plan at all.”