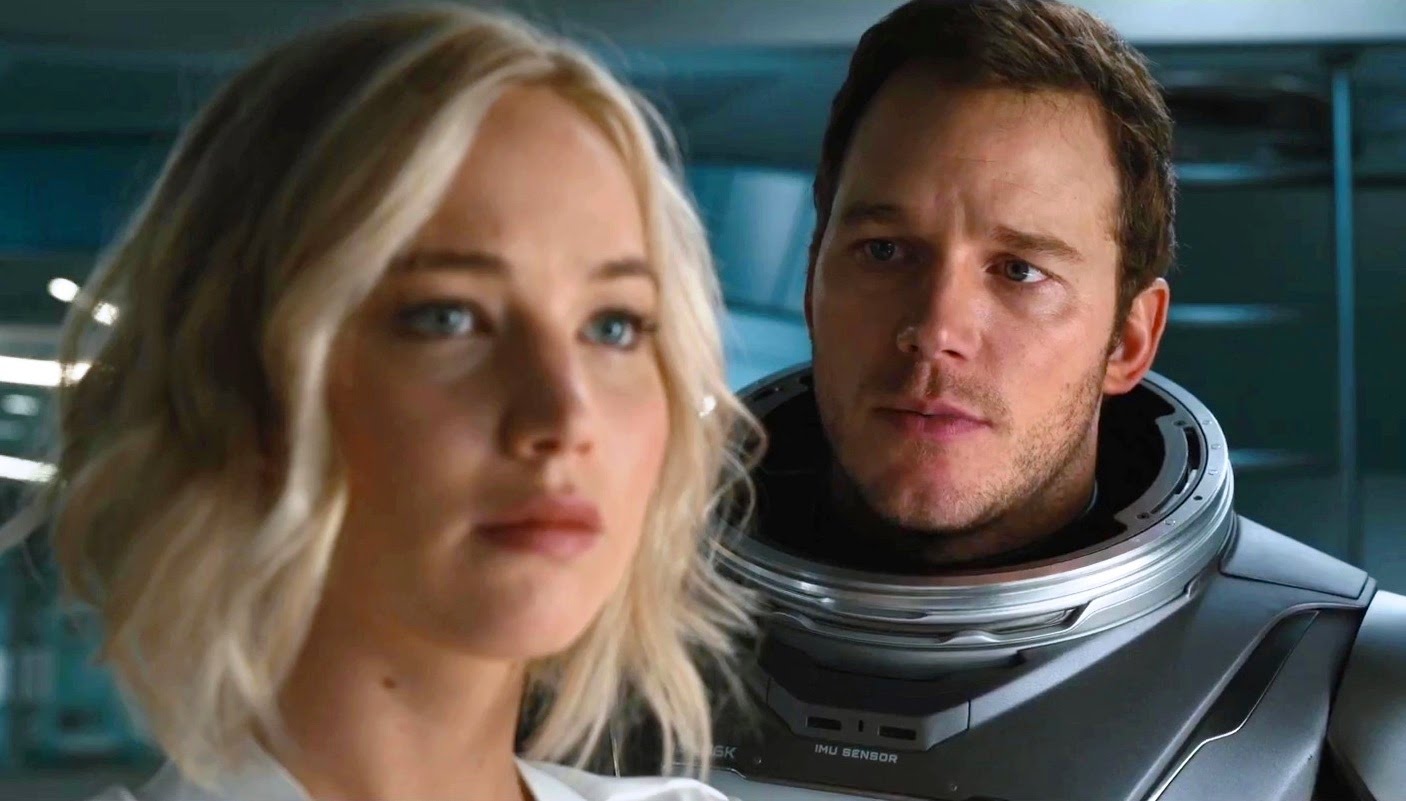 To call Passengers junkie science fiction would be too kind. This is the slick Hollywood glaze of science fiction which is not about high-concept ideas for fun pulp, but an excuse to place A-list actors in a romantic space setting. I can only imagine that the producers were only thinking of the star power for having the big names of Chris Pratt and Jennifer Lawrence, both of them no strangers to Marvel movies, would make a golden duo for a romance among the stars. Perhaps they believed so much in their charisma that they could carry such an immoral, uneven and shlocky script past its glaring flaws. Oh, how I wish they had such power.

Pratt plays Jim, an average engineer who finds himself awakened on a starship of 5000 passengers before having reached his destination. The ship will not arrive at the planet he is traveling towards for the next 90 years. There’s no way to get back into his cryo-sleep pod to avoid dying of old age, no means of awakening the ship’s crew and no way to ask Earth for help from such a distance. He is destined to die on this ship. But at least he has enough entertainment on the ship to pass away his remaining days with video games, fine dining, books, movies and a robot bartender. Of course, he’ll get bored with the isolation and become so depressed that he contemplates suicide.

A cure for his loneliness, he reasons, is to awake one of the passengers so that he can converse with a real human being. Perhaps he could research all the passengers and find one that has the closest of skills to an engineer that could fix his hibernation pod and, you know, maybe fix the crumbling ship. Nah, he’d much rather seek the hottest lady on board and condemn her to death so that he can find someone to love on a dying ship. And, of course, he picks the hottest looking dame on the ship who happens to look like a movie star. Aurora (Jennifer Lawrence) is an author from New York City who dreams of having new experiences on a new planet to write some great stories. Too bad her life is going to be cut short so she can die of old age on a spaceship with Chris Pratt.

Because this situation is the worst possible event you could wish upon a human being, Pratt must naturally lie about having nothing to do with her premature awakening. He’ll keep that tucked away for the hill of their relationship so that the two can frolic, stare loving at each other during dinner dates, go on spacewalks and have passionate sex. Even when Pratt finally slips out the truth, she seems to be over it after a few jobs around the ship. After all, they can’t stay mad at each other. They’re top movie stars and need to be a couple for the big screen in this dopey piece of science fiction.

As the story loses its sense of morality, it also loses its tone. I thought I was witnessing a romance among the stars, but the third act quickly turns into the most lame-brain of action movie cliches. All those malfunctions around the ships that the couple casually ignore come back to bite them when the ship is mere minutes away from being destroyed. And it’s no exaggeration when I say they put these repairs off to the very last minute, even going so far as to take a nap and have a swim when they finally reach the malfunctioning reactor. On and on the third act continues with one danger after another, mounting with such uninteresting inevitability. The reactor cannot be repaired unless they pull a switch, but the switch is outside. The switch outside isn’t working so they need to vent the chamber. The chamber can’t be vented unless someone stands in front of the vent to manually open them. Of course, the manual control for opening vents would be right next to the vent! Where else would it be?

It is so disappointing to see such a concept for great science fiction turn into the most vapid, immoral and stupid of stories. It’s a film that seems to have been sold on its cast, its special effects and its romance, without the slightest ounce of intelligence to its script. I will grant that Pratt and Lawrence look good as an onscreen couple and the designs of the starship are uniquely imagined and polished. But it’s all in service of such trashy writing better suited for that best-selling romance novel where readers care more about the kissy-faces of the leads than the dopey decisions they make. This is science fiction for those who don’t like science fiction, believing this junk will finally turn them over to the genre. Let’s hope this type of film, bereft of ideas and common sense, will fade away into a galaxy far, far away.