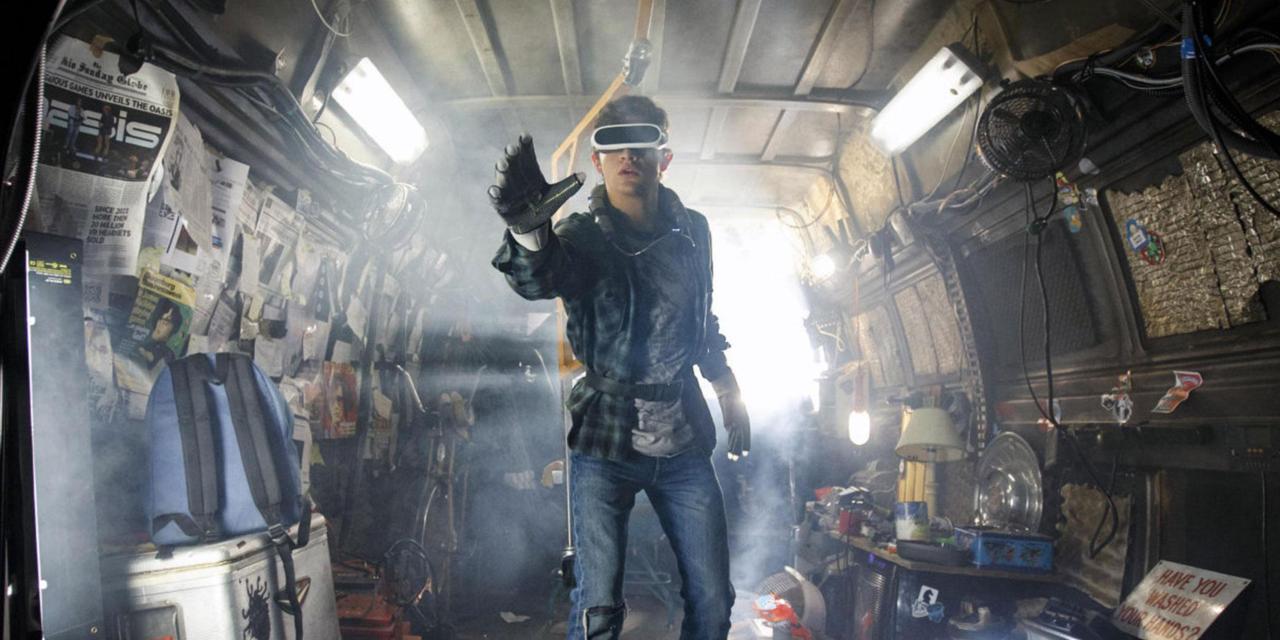 Ernest Cline’s Ready Player One reads like a geeky ode of a fanfiction, crossing over several properties into his dream of a limitless cyber adventure. Steven Spielberg is the perfect director to make that dream come true, having enough pull to round up all the toys they love to play with and letting them loose on the big screen. Their combination results in one of the dorkiest fangasms of a movie that visually, narratively, and verbally rattles off pop-culture appreciation like the ultimate machine gun of geek. This aspect may rob the film of being little more than a glorified monument to cool, but as someone who gets a kick out of Gundam, Back to the Future, and Buckaroo Banzai all being present in the same film, I couldn’t help but be delighted by such a boundless trip through a nostalgic wonderland.

Though set in the dystopian future, most of Ready Player One takes place in the virtual world of the OASIS. The rest of the population spends most of their time there as well, partially because the world is a polluted junkyard of stacked trailers, but mostly because of the ultimate prize awaiting the players. The deceased creator of the OASIS, the awkward James Halliday (Mark Rylance), has hidden secret keys inside the virtual world that will give the lucky winner ownership of this thrillion-dollar business. There are good guys seeking the keys. Wade (Tye Sheridan), or Parzival as he is known online, is the unlikely hero of a real-life loser and an OASIS ace. He’s an accomplished enough gamer to make it far and astute enough of geek culture to best anyone in a trivia contest. There are bad guys after the keys. Nolan Sorrento (Ben Mendelsohn) is the CEO of a rival company that desperately wants to own the OASIS for his own greedy and corporate aspirations. He has amassed an entire division devoted to both winning the quests and studying up on pop-culture to decipher Halliday’s clues.

The OASIS is a festival of franchises, perfectly embodying the current craze of VR Chat where anyone can play as any avatar, licensed or not, from Overwatch to Battlestar Galactica. Users can have races with the Dolorean, do battle with King Kong, and pilot a Gundam. True, there’s a shameless nature to the film’s rip-roaring nostalgia for yesteryear that overloads as though Spielberg forgot to turn off the tap on his inspiration keg. I was fully ready to discount the movie for being just that, but there’s just something so spirited and charming about Spielberg’s blaze down memory lane that tickled me enough to get giddy for a battle of The Iron Giant versus Mechagodzilla.

Much of what I love about Spielberg’s Amblin productions are present and accounted for, surely of a salivating desire for Cline’s love for genre pictures. The story holds the youthful characters up as the heroes of the virtual world, where the 11-year-old Sho (Philip Zhao) can be a stellar ninja, the female Aech (Lena Waithe) can be a cybernetic giant, and the facially-scarred Samantha (Olivia Cooke) can be a femme fatale. They all have great chemistry and speak in a manner that always felt genuine, even if it felt a little odd that Wade’s favorite film in the future is Buckaroo Banzai. The special effects are naturally dazzling but manage to hold that wonderment so well for 2/3 of the film residing entirely in a virtual world. The characters always felt believable for a video game world, where the characters and physics always feel just a tad off or a little glitchy without turning into a Max Headroom homage. And because it’s a Spielberg movie, he’s got to have that one chaotic chase scene where the camera freely follows our characters with thrilling suspense. There are at least three of those set-pieces present, one involving the motorcycle from AKIRA outrunning a dinosaur and another with a clever take on a Kubrick classic.

Cline co-wrote the screenplay for the film based on his own book, along with his geeky partner in crime of Zak Penn. While they shift around at least a dozen events and characters from the book, the genuine spirit and heart of the story remain unaltered. The world is well-defined enough with the vertical trailer parks of the destitute and the slave-like VR chambers of corporations to punish those who don’t pay their bills. Perhaps they could have explored more of this world, considering the lack of any focus on employment and pollution that were always shooed away into the background, but it’s clear that Cline wasn’t as interested in a dystopian message as he was a general geek off of an adventure. Pulling apart the film as anything more leads into some very surreal areas, as one could probably write a scathing thesis on the nature of movie marketing for this being a film about exploiting nostalgia with a villain seeking that very goal.

Ready Player One has a very specific target audience and I’m clearly in that demographic as I dug the hell out of what mostly amounts to a glorified and gorgeous tribute to pop-culture. It may seem childish to get giddy over the film’s inclusion of Rubik’s Cube restructured in the OASIS as the Zemeckis Cube that stops time with a jingle of Alan Silvestri’s classic score. If what I just wrote sounds like Greek, chances are the bulk of the movie’s madness is going to do little to entertain and navigate the uninitiated through the film’s mystery and message of reality being key. But for as old of a director as Spielberg is with his accomplished filmography, he proves he still has the knack for speaking the language of kids in an accent both knowing and classic. In terms of being the grandest of gushing of greatest hits, I’ll throw my hands up and fully admit to being the dork who dug the movie where a Gundam fought Mechagodzilla and a cyborg blew up Freddy Krueger. You don’t see those type of wild visuals every day at the theater.