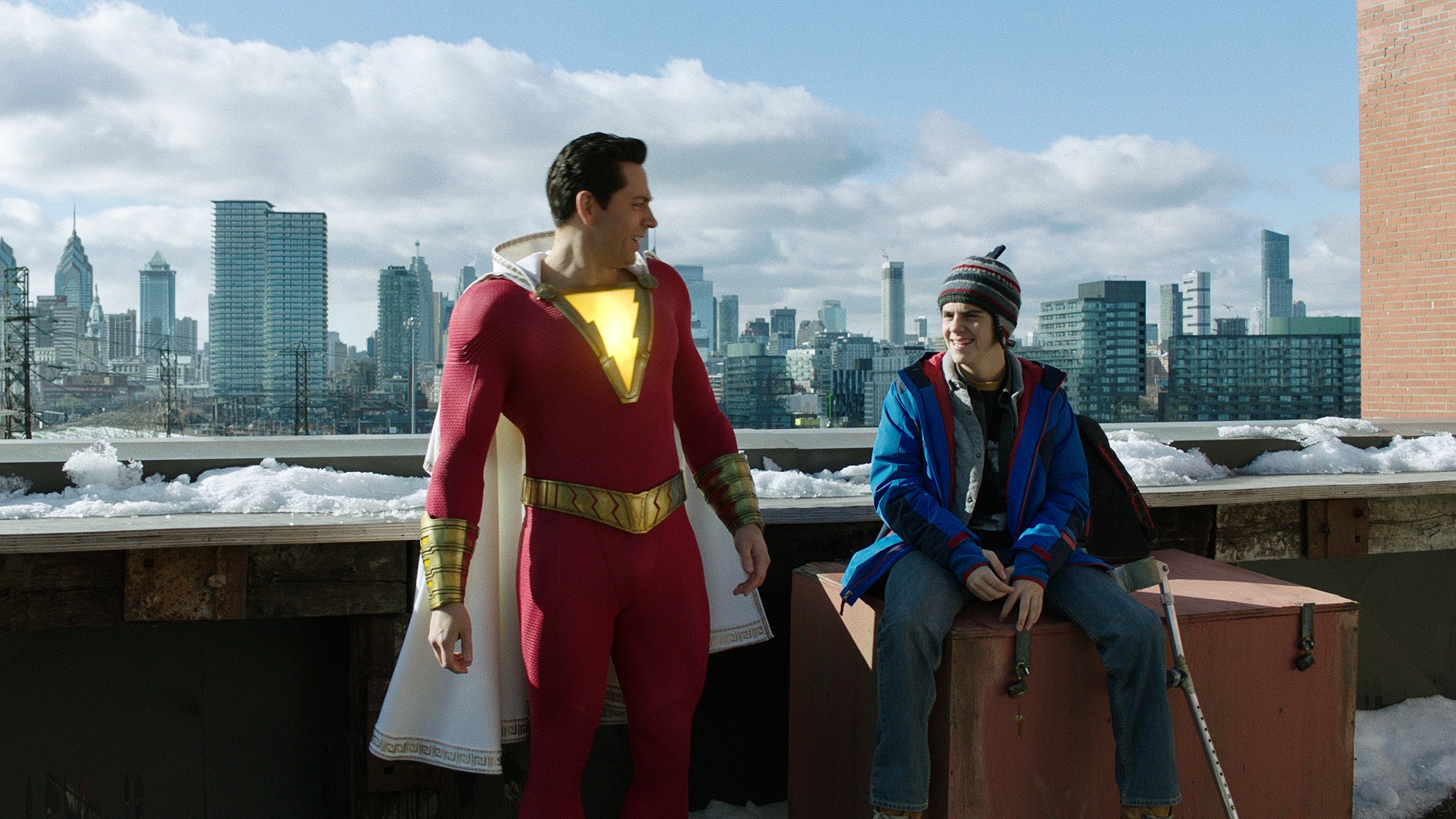 As the DC Comics cinematic universe tries to find its firmer footing, SHAZAM stands tall and proud as a classical superhero outing. Not only does it do right by the titular hero and his quirky world of magic and adventure but it also a knowing smirk for the rest of the DC universe, cunning and clever enough to know how and where to poke fun and throw shade at its competition. This brings out a brilliant mixture of the classic Richard Donner style of superheroism as well as an awareness of vibe to have fun with itself. After all, if you a boy all the powers of Superman, why wouldn’t he be ecstatic and try out crazy stuff with his newfound abilities?

That boy happens to be Billy Batson (Asher Angel), trouble-making orphan so desperate to find out what happened to his mysteriously missing mother. What he finds instead is the elderly wizard Shazam (Djimon Hounsou), hoping to find a pure-hearted child to bestow his powers upon in the on-going war against demons. He hasn’t had much luck over the past few generations but believes Billy is the one. When Billy now shouts the words “SHAZAM!” he transforms into a buffly adult wizard, played by Zachary Levi with level of childlike wonderment about now being an adult, albeit one with a cape and a giant lightning bolt on his chest.

Also enthused about this latest development is Billy’s new foster home roommate Freddy (Jack Dylan Grazer) who can’t wait to test out what sort of powers Billy now possesses. And there’s thankfully plenty of time to find out all the powers of Shazam in a hilarious sequence of viral video experiments, testing everything from flight to electric conjuring to being bulletproof. The scene where Shazam foils a pair convenient store robbers is a surprisingly adorable sight for how excited Billy is that he can deflect their bullets. But just to be sure, Freddy thinks the robbers should aim for his face. Thank goodness they’re willing to play along and not take hostages.

Every great hero needs a villain and Shazam has his as well. The evil Doctor Sivana (played by veteran villain actor Mark Strong) is after the power of Shazam, having been denied it as a child when he was tempted by evil. Now he has embraced that evil and, with a routine bad-guy eyeball, he leads an army of demons to do his brutal bidding in finding that wizard power he desires. Okay, perhaps not the most original bad guy for wielding an armada of special effects, but Mark Strong is a lot of fun to watch in a role where he seems most comfortable.

Yes, the film is certainly fun and charming, but let’s not dismiss it too quick as little more than a DC rendition of Big for the classic character. At its core is a true sense of family, both with Billy’s sweet foster family ensemble of plucky kids and the heartbreak of Billy finally realizing why his mother had been missing for so long. I should also mention that Doctor Sivana’s demons go very vicious on humans when they slaughter an entire room of corporate executives in a scene more akin to a horror film than a superhero flick.

What ultimately makes Shazam succeed so well is its warm confidence in the humor of the character, the somberness of his drama, and a knowing enough nature to make some deep jabs at the DCEU (some subtle, other blunt). It adheres greatly to the classic sensationalism of how Richard Donner approached Superman, going hard with the drama but also inspiring with the zip of wanting to be a man who can fly and stop buses from crashing off bridges. Director David F. Sandberg respects the character’s traits while also delivering on a film worthy of being called a superhero epic, embracing its nature more comic-bookie than action friendly. And even though the gags resort to one obvious reference to Big, there’s energy all its own to be the type of superhero movie. Shazam may not have as deeper a cultural impact as previous comic book movies but serve as an entertaining action-comedy worthy of many smiles and childlike wonderment. After all, this is Shazam we’re talking about here; a kid-wizard superhero who fought evil worms from space in his many comic books. You gotta approach such a concept with a smirk.