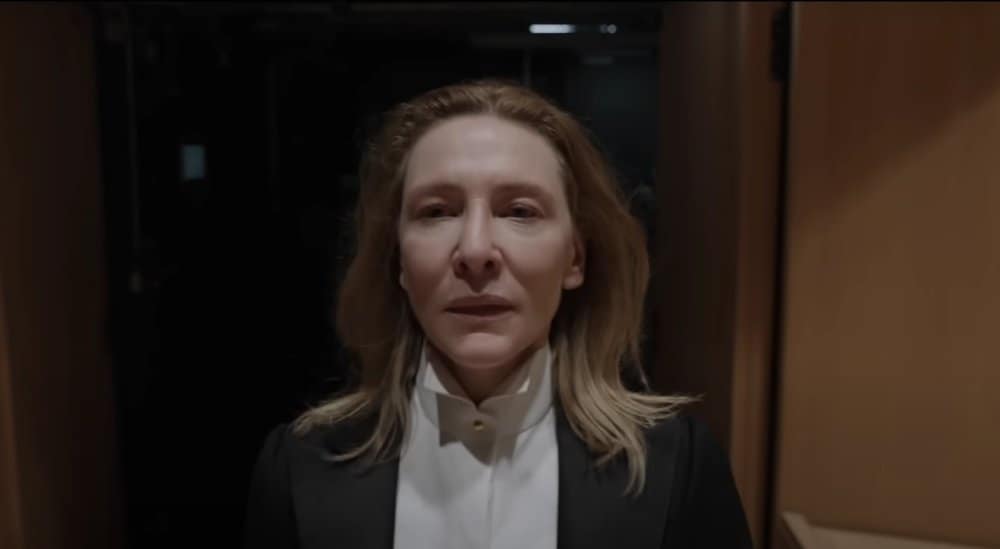 There’s one exchange in Tár that perfectly encapsulates what the movie is all about and it’s an early one. The famed composer Lydia Tár has just finished lecturing a student on separating art from the artist. Not pleased with the response, the student leaves, calling Lydia a fucking bitch. Lydia’s calm retort is to calm him a robot, unable to feel and be human. Yes, it’s about cancel culture but more to that nuance than just the outrage and the fall from grace.

The film gives us a vicious portrait of the titular composer, portrayed with astounding grace by Cate Blanchett. She’s established as an acclaimed woman, having garnered numerous awards and being regarded as a star of the classical music scene. Prior to her aforementioned classroom exchange, she speaks to a crowd with an on-stage interview, speaking with much insight and foreknowledge of music. Her career has led to a busy schedule of interviews, concerts, and talks with such colleagues as the timid Eliot Kaplan (Mark Strong) and the aged composer Andris Davis (Julian Glover). All of this is arranged by her calculative and careful assistant Francesca (Noémie Merlant), keeping her head so far down she misses out on chances to prove herself.

Life seems pretty sweet for the composer. She has a sweet pad, a second apartment for meeting players, a supportive wife Sharon (Nina Hoss), and a creative daughter Petra (Mila Bogojevic). But there’s a darkness in her past that she’s trying to cover up. Haunting images of accidents and accusations cloud her mind. Messages are ignored and emails are stalked as she tries to cover up her crimes. Slowly, the darker truths are revealed and the once prolific composer finds a different spotlight placed upon her.

The film never makes her issues as simple as one incident that ruined her life forever. There’s this compounding nature to how it was more than mere sex and affairs that crumbles her credibility. It’s the priming of the pump the way she argues that all art should be separated from artists, a common cry whenever one suspects that they or their colleagues will one day be in the crosshairs for things they’ve actually done. It’s her manipulative ways that bring about favoritism in her players, where the hottest young prodigy will gain all her recommendations. It’s the constant lying and chucking people under the bus for her own benefit that forces her colleagues to abandon her. By the time there’s a viral video edited to make Lydia seem even worse, it doesn’t matter if it can be proven false. The damage has already been done.

Lydia’s journey is one that is held firm for following the rise and follow. There are so many little moments that compose her life that are punctuated by anxiety and unease. Blanchett’s performance brings a certain familiar ease to this type of celebrity who seems astute and inviting on the surface. It’s only once those are let in do they see the real Lydia. Lydia awkwardly tries to connect with others and flies off the handle for the smallest things.

Watching her fall makes for great drama, but I also appreciated the film’s stellar fourth act following the aftermath of her cancelation. Lydia struggles to work her way from the ground up and comes to terms with a world she doesn’t understand. There’s a moment that literally makes her puke when realizing how many lives are damaged thanks to her reasoning for sexual abuse to go unchecked. The world she wants to live in, where you’ll only be judged for your music and not your character, is not present. There are no closed doors for breaches of conduct or abuse. The public no longer just wants a composer; they want a composer who isn’t a complete dirtbag with sneering condescension about different races and sexualities.

Tár is an intoxicating character study of a canceled woman with a magnificent performance by Cate Blanchett dominating the screen as much as her character orchestrates. Todd Field has really outdone himself with this masterful observation on how relics of the past and the current crop of top talents are not immune to criticism; that their unwillingness to adapt and learn from the next generation will ultimately doom them. There’s a particularly piercing moment when Lydia speaks with a young player about the music they’ve listened to. The young girl brings up a familiar name and Lydia asks what record it was. The girl replies it was YouTube. Little moments bubble with aggravation and confusion, making for one of the best movies on the topic of cancel culture and how it proceeds nearly in the blink of an eye for the decayed sensibilities of an elite.

One thought on ““Tár” Review”