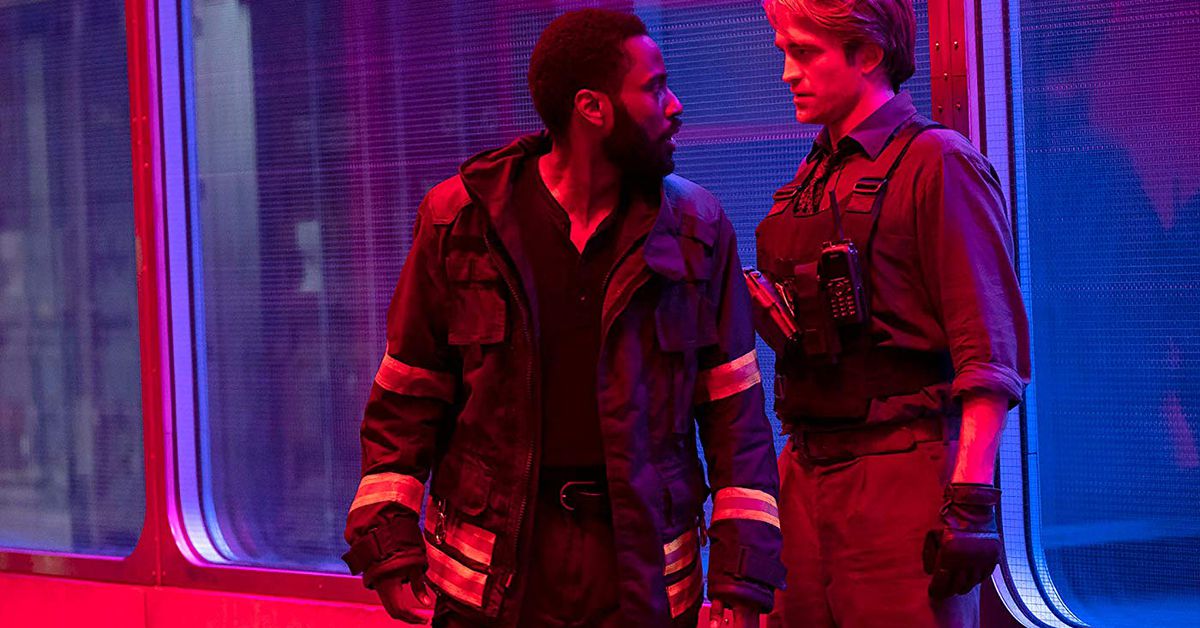 Christopher Nolan’s grand ideas for mind-bending action are certainly unparalleled. Tenet is undoubtedly his most elaborate, playing with time and its inversion to stage the most trippy and tense of sequences, designed to distort and excite. Nolan’s ambition, however, has trumped the rest of his filmmaking, less concerned with a cohesively pleasing theme than making sure the plane explosion looks real cool.

This seems most apparent when following our central character, who is only referred to as The Protagonist, portrayed by a stern John David Washington. He’s a CIA agent who passes the opening bout of guns blazing and making the tough call in a challenging situation. Trusted with high-priority missions, the Protagonist is let in on a mission to uncover the mystery of weapons that travel backward through time. A gun doesn’t shoot bullets but catches them. Brisk exposition is delivered of how these weapons are being manipulated with inversion radiation from somewhere in the future where they traveled backward. This raises a few questions of how much free will we can have when time has already decided what these weapons and anything affected by the radiation will do. This is asked but never fully answered, explained away as the being still having the free will to make the backward movements happen. And if that’s too much, the one-scene doctor gives the base acceptance slogan of “don’t think, feel.” In other words, let the atmosphere wash over you and don’t think too much about it.

But Nolan doesn’t make this easy. We quickly jump into Protagonist’s investigation, which leads him down a twisty trail of tracking down people, art, yachts, and gold. All of this is delivered so fast with dump trucks of exposition as characters mill about in sexy suits and dresses amid stylish locations fit for James Bond. Blink, and you’ll miss Michael Caine’s one scene of sending the hero on his way, echoing his role in Inception to act as little more than a finger-pointer for which aisle the rest of the characters are on.

The quest itself is undoubtedly pleasing to the eyes, especially with the addition of Robert Pattinson as the mysterious Neil joining the adventure. We don’t know too much about Neil, but nor do we Protagonist. The less they figure they know about each other, the better. However, they also don’t reveal much of anything because then it would spoil the big mid-movie twist of how the code of Tenet is a palindrome, playing far too bluntly with where this thriller is going.

By the time we get to that point, however, the film loses a lot of its smarts. The central villain behind all this strangeness is the rich Russian Andrei, played by a tubby and growling Kenneth Branagh. He soon reveals his access to a device that can send him literally back into the past, as well as his motives for doing so. The villain starts off compelling for being an abusive ex-husband to his battered ex-wife Kat (Elizabeth Debicki) and having a connection to the future. But by the time we reach the moment where he absolutely must deliver a monologue, his ultimate goal is just to blow everything up. It’s a disappointing progression that echoes how Nolan stages his villains, as in The Dark Knight Rises where Bane starts off as a figure aiming to crush the elite of Gotham and ends up just deciding to detonate a nuke in the city.

The film falls back on a lot of its theatrics to carry the picture, and they mostly work. Everything from the opera house operation to the warzone showdown of soldiers moving backward and forward through time is certainly innovative and most exciting. Much of this is due to some quality stunt work, special effects, and the exceptionally driving soundtrack by Ludwig Göransson, which may be the one perfect thing in this film.

Yet there’s always something that hinders these scenes from being truly excellent. I’m not just talking about the lack of character depth or central themes less broad, though these are issues. I’m talking technical with a sound mix that is so uneven it can be hard to hear the characters amid the gunfire and music. This isn’t helped by the fact that most of these characters spend a good chunk of time with their faces in gas masks or oxygen masks. Not that there’s anything all that compelling spoken between moments of explosions and frenetic fights.

There’s a moment in Tenet where Pattinson speaks with Washington about causing a distraction by wanting to crash a plane into a hangar. From there, we watch them get in contact with someone to hijack the plane and attend the briefing, then watch them get on the flight, seize it, force off the crew, set the course, time out the evacuation, and then watch it crash. It is here where the problem of the film seems most prominent, more occupied with staging something that looks cool without throwing some extra gravitas behind it. The plane explosion is neat but it’s not as thrilling when we’re told exactly what is going to happen and more or less watch it happen. Little is left to surprise from a film that pretty much telegraphs where it’s going with its cyclical nature and hopes you’ll be more amazed by the mere construction. Tenet is a film that spends more time spouting “look, look” at its great idea for time-manipulated action scenes than ever letting them play out excitingly with a flow. The palindrome theme couldn’t be more fitting for starting with great ambition and ending with little else.

One thought on ““Tenet” Review”