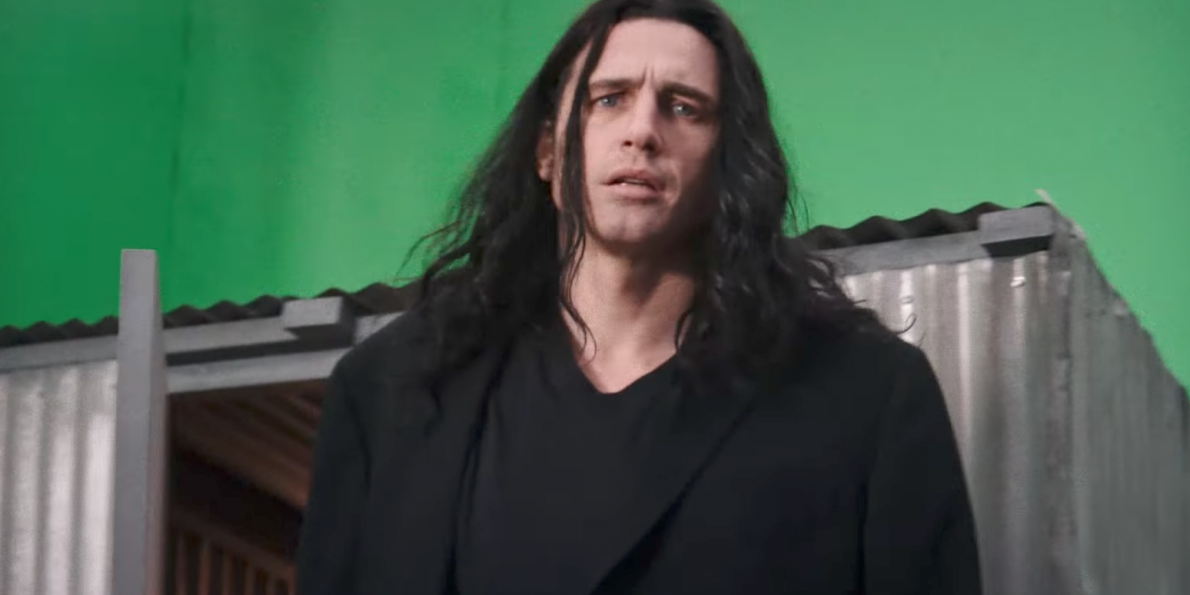 Tommy Wiseau is a fascinating director. The Disaster Artist begins with interviews of real celebrities talking about him and his film The Room as if he was a genius that had created a masterpiece. This includes actors such as Adam Scott, wishing he could go back in time to be on that set, and directors J. J. Abrams and Kevin Smith who applaud Wiseau. Were they joking or were they serious? Or both? For the knowing crowd at the screening who had all seen The Room, myself included, we started laughing quite early at these statements. This is a film which presents an intoxication of bad filmmaking that is so potent it’s easy to get lost in the ridiculous haze of the enigma that is Tommy.

It’s a film of curiosity for its subject, seen through the eyes of amateur actor Greg Sestero (Dave Franco). He first meets Tommy (James Franco) at an acting class where the long-haired, pale figure leaps onto the stage, shouts at the top of his lungs, climbs the set and freaks out on the floor. Greg can see something in Tommy that nobody else can: determination. There was no fear in that performance and Greg so desperately wants that spark in his life. Tommy agrees to take on Greg, but with stipulations about privacy. Namely, he doesn’t want Greg asking about where he is from, how he has so much money and what his actual age is. Greg doesn’t seem so eager to prod given Tommy’s weirdly charming accent of indeterminate European origin. Even though he’s clearly hiding something that could be juicy, Wiseau has an almost cute and innocent way of covering it up. When Greg’s mother asks how old he is and he says he is Greg’s age of 19.

Greg is also willing to accept Tommy’s mysterious nature given his spirit to make dreams come true so easily. The two of them talk about someday visiting the roadside spot where James Dean died; it’s Tommy’s idea to go that very night they talk of him. They dream of becoming movie stars in Los Angeles; Tommy already has an apartment they can share in the city. But they’re still amateurs and can’t find a gig. No matter; Tommy has plenty of money to make his own movie.

Like a budding entrepreneur, Wiseau writes his own script for the feature that will portray him as the hero and not the villain that a casting director recommended he play (though Tommy still seems open to the idea of his character being a vampire). The film becomes funnier and more tragic as Tommy’s script, The Room, enter production. Greg is still together with his partner in this venture, but everyone else involved can see the kinks Wiseau’s armor that would be the downfall of the film. They speak with a filmmaking equipment facility that will rent them the materials they need, but Tommy wants to buy. His methods for filming baffle the script supervisor (Seth Rogen) from the first shot; there’s a perfect brick wall right outside the studio doors, but Tommy insists that they shoot an exterior scene with a brick wall be shot inside. And that’s just the tip of the iceberg as more Wiseau’s strange methods make everyone worried about the fate of this film.

Tommy is egotistical and a jerk, but not without some method to his madness. When Tommy becomes insulting towards his love interest in the film, Greg pulls his pale-faced friend aside and tries to talk some sense into him. With a Quentin Tarantino education of film, Tommy argues that what he is doing is not completely off base, citing how Alfred Hitchcock would throw real birds at his actors to get the best reactions of terror. “He was a jerk,” argues Greg. Ah, but he is Alfred Hitchcock, a name that has stood the test of time. The sad truth that Tommy can’t recognize is that he will never be Hitchcock, no matter how much he abuses the schedules of his actors or punishes them with refusing to turn on the air conditioning.

But there’s rarely a moment that feels like melodrama, even when the relationship of Greg and Tommy reaches a boiling point. This is due to both James and Dave Franco delivering flawless performances where they meld so deeply into these roles it’s almost eerie watching them replicate direct scenes from The Room. Watch how effortlessly James is able to put on the aloof personality of Wiseau, sliding so easily into the character that he can garner big laughs by his very delivery of the simplest lines. This grace of embodying Wiseau prevents the film from trying too hard to make the true story hilarious. Even scenes built intentionally to be annoying, as when Tommy can’t remember The Room’s most iconic line, come off more amusing than tedious for James’ performance alone. Similarly, Dave Franco ventures out of his comfort zone to play Greg, holding back his usually big-teeth stoner acting for a character that is wide-eyed with dreams and slowly disillusioned by the friend he once trusted.

For the uninitiated on the story behind The Room and the phenomenon brought about, there may be a twinge of guilt in the back of your mind for laughing at Tommy and his movie. Sure, he has a funny voice and an obliviousness to his silliness, but he’s also a heavily flawed human being. He’s lonely, secretive, jealous, unsociable and so full of himself that he looks at himself as the next James Dean, marveling at his hair and muscles in the mirror. But the key factor that separates Tommy from other bad movie directors is that after everything was said and done, he embraced the unintentional hilarity his film brought forth. At the film’s crowded screening, Tommy leaves the theater, crushed that people would laugh at his vision. Greg brings him back in to watch the expression on everyone’s faces. The audiences are in hysterics at Tommy’s awkward sex scene, the strange method of playing football and lines so ridiculously spoken they’ve become some of the most iconic of all bad-movie dialogue. For such a reaction, he’s willing to take a bow and thank everyone for appreciating his “comedy” movie.

This easily my favorite comedy film of the year. When I wasn’t laughing hysterically at Wiseau’s mannerisms and filmmaking tactics, I was smiling at the genuinely spirited nature of two guys who just wanted to become famous. In the end, they achieved that goal, more or less. The Room, despite initially running for only two weeks in one theater that Tommy paid for, went on to become a cult classic of arthouse theaters. Indeed, just a week prior to the screening, there was a party event showing of The Room where audiences came dressed in the outfits of their favorite characters, tossed around footballs and quoted along with all their favorite lines.

The Disaster Artist is an exposing and hilarious love letter to what has become this century’s Rocky Horror Picture Show and how prolific Tommy has become because of it. Legendary bad movie director Ed Wood once wrote that aspiring writers should “just keep on writing. Even if your story gets worse, you’ll get better.” Tommy probably won’t become the dramatic actor he wanted to be and probably will never be in a project more engaging than The Room, but he certainly seems to have become a bigger name and better-spirited person to be around from the numerous special screenings he has attended. And unlike Ed Wood, Tommy is now in on the joke and embraces it with a smile that is passed around theaters more than a football.