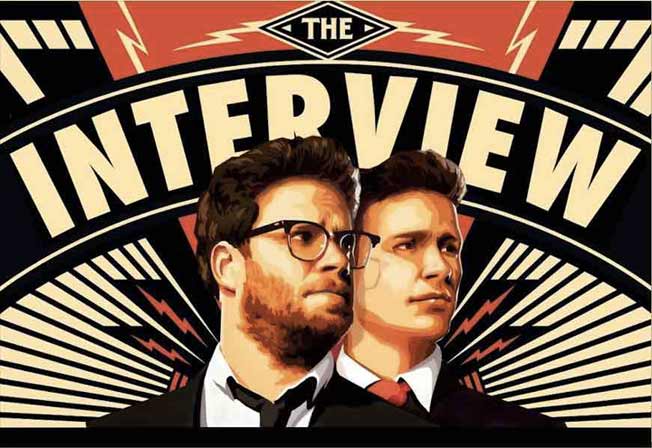 After all the controversy over the Sony hacks and North Korea threatening America if they released The Interview into theaters, is this comedy any good? While it’s certainly nowhere near the level of controversial buzz it generated, yes, it was a funny picture. It will not be fondly remembered as the satire that stabbed violently at the ordeal of North Korea with telling wit, but did manage to be humorous for what it wanted to be. Given Seth Rogen’s previous comedic projects (This is the End), it wasn’t exactly aiming for the furthest heights of satire.

That being said, there is some cleverness given to its semi-meta premise. James Franco plays Dave Skylark, a talk show host that thrives on the most scandal-worthy conversations with celebrities. Eminem comes on the program to reveal that he’s homosexual and his lyrics were acting as clues for these years. But all these interviews to little satiate his producer/friend Aaron Rapoport (Seth Rogen) and his thirst to produce better television. Seeking to be more professional, the two end up landing the most exclusive of interviews with North Korean leader Kim Jung-un (Randall Park) in his native country. Of course, acquiring such exclusivity attracts the CIA that want Dave and Aaron to act as secret agents and take out the dictator.

The humor for this let’s-kill-a-dictator plot is on par with Rogen’s line of comedy. There are no shortage of weed and penis jokes in stock to please the most bro-worthy of college boys. Foreign objects are placed inside rears and limbs are severed in the name of shock. But when the script can pull itself away from a-typical low-brow, there are a few nuggets of insightful satire on North Korea. The Korean children bred and conditioned for entertainment play guitars for their guests with disgustingly perfected smiles. The grocery store Kim stages for his visitors is a fake which makes for a great reveal once James Franco finds himself wronged. Throughout their stay, Franco believes all of Kim’s words while Rogen politely nods along being aware of all his tricks. It’s a predictable, but playful enough dynamic for the dolt and the straight man.

The comedy is somewhat grounded by an arc for Dave and Kim. The two find themselves developing a friendship in their manchild lifestyles of too much play and a want to be taken seriously. I was rather surprised at how much the movie held back in transforming Kim into a goof – thanks to both the script and Randall Park’s performance. He’s certainly silly the way he favors Katey Perry as his music-to-drive-tanks-to, but rarely over the top with emotions and secrets. If the real Kim Jong-un favors the presence of Dennis Rodman, being in possession of a Katey Perry song seems very plausible.

There’s a romance between Seth Rogen and a female NK soldier, but it’s mostly background dressing for Rogen to get in a few laughs as the nervous spy. As Franco is laid back and easy-going as he grows to love Park’s Kim, Rogen gets to do most of the spy work with his mishandling of secret weapons. He even wedges in a few fight scenes since I swear it must be a requirement in his contract that he does some slapstick.

Perhaps it’s just all the controversy surrounding the movie’s release, but it felt as though the satire should have gone a bit further. Seth Rogen and his co-director Evan Goldberg spent a large amount of time doing research on this subject from as far back as when Kim Jong-ill was still alive. It’s a little disappointing that after all that work and a desire to make something a little more relevant of the times, the end result is one that fills in most of its blanks with toilet humor. Rather than have more fun with focusing on the culture of North Korea, Franco and Rogen spend most of their time bickering in a guest room about (what else?) weed and penises. Maybe they secretly knew they were treading in hot territory and wanted to play it a tad safe.

While The Interview doesn’t redefine Rogen and Franco’s comedy careers, it’s good for a few laughs both insightful and dumb. Most of its base humor is deserving of a chuckle and the few digs at North Korea are well-thought. For not having as much bite, there is enough satirical bark at media and dictators to offer more than I expected. To think that a nuclear war could’ve broken out over such a comedy is more laughable for how there was such a big stir over such a low-brow farce. There’s also of bit of reflection in the character considering North Korea has made a multitude of propaganda films, but one suggestive piece of satire on our end causes outrage. Art reflects life – not that I’d considered The Interview a piece of art. It does rhyme with fart though.