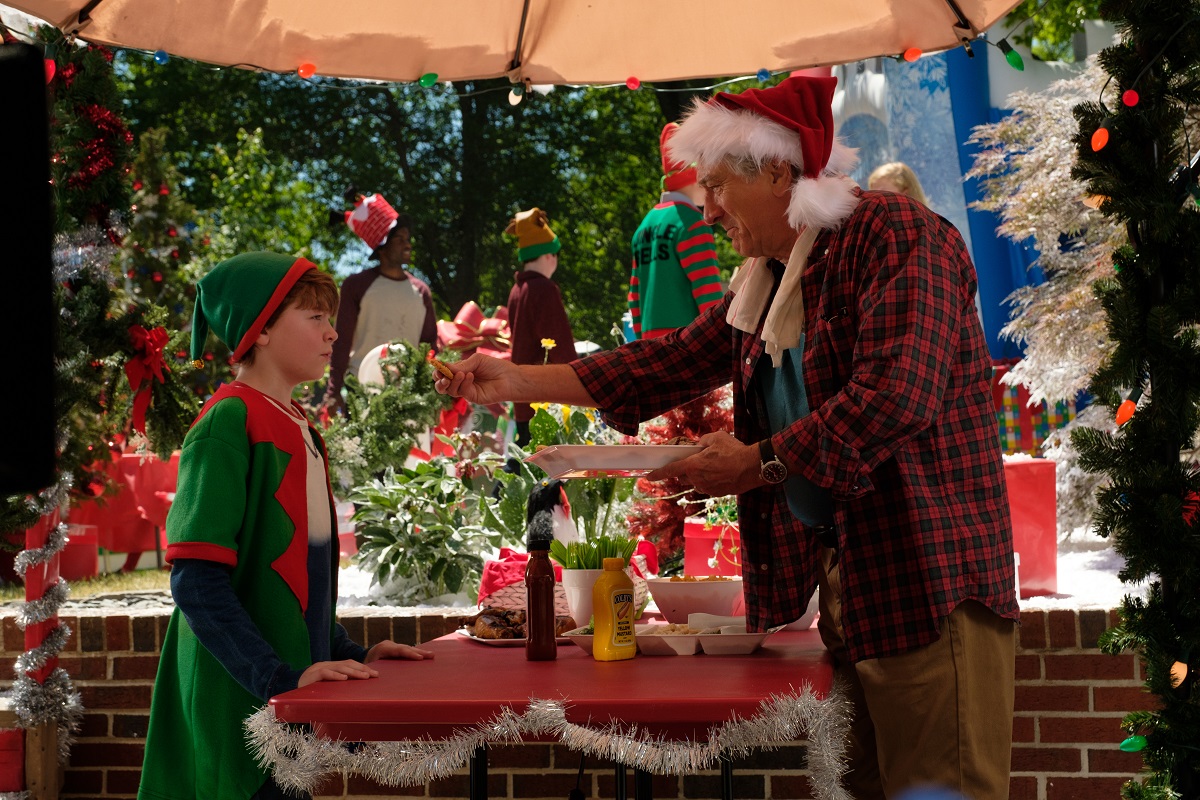 I never thought I would ever write something like this but I wish this were a sequel to Robert De Niro’s other abysmal comedy Dirty Grandpa. That forgettable 2016 comedy was horrifically bad but on a surface level of poor choices in funny antics. I was not won over by that movie’s attempt to brew laughs from De Niro grabbing taints, farting loudly, having raunchy sex, and cussing as though he were on a Scorcese picture where the director took cocaine and demanded more extreme vulgarity. I didn’t like that film because the jokes did not make me laugh. I loathe The War with Grandpa, however, because it has more problems than just dead-on-arrival slapstick.

De Niro plays the cranky Ed, an old man of all the old stereotypes. He can’t understand technology, gets easily angered at an automatic checkout machine, and starts fights with anyone under the age of 60. He at least seems somewhat aware of this mindset as he refuses to bunk with her daughter (Uma Thurman). She insists, however, with typical widow pathos for Ed being lonely and grandpa moves into her home with her children. The only problem is there isn’t enough room for him in a house with three kids. Well, actually, there is, if the middle-child of Peter (Oakes Fegley) moves from his room up into the attic. Forced to make this move by his mother, Peter is the bullied kid at school pushed too far. He declares a prank war on grandpa.

The pranks rank between predictable family-film fluff to crossing lines too far. It starts out innocent enough with Peter waking up grandpa in the middle of the night with loud music. Not so fun is the second-act prank where he makes grandpa’s phone go off at a funeral for a friend where he’s forced to dig his phone out of his dead friend’s pants. And yet it doesn’t seem too far because Ed, surprisingly, treats this war as a real battle of wits than trying to reason with his grandson for what should be a non-issue. After all, Ed seems to show great patience with his youngest granddaughter. Why should he resort to making his grandson literally sign a declaration of war for his room? To get his aggression out? How does one even win this war?

Yet that’s the point that this film horrifically tries to make. There is no point to war but does a tween really learn that lesson through suburban hijinks? A kid should not have to tearfully say he never wants to go to war for the act of causing some structural damage to his house. It is only a mild grace that the film doesn’t dig too deep into touching topics of colonialism. How awfully more misguided this picture would be if Peter had to cry for the plight of Native Americans via a dodge ball match of kids versus seniors.

What makes the experience all the sadder is how many big names have been stuffed into this mindless motion picture. Uma Thurman tries out her best angry mom role but she’s a bit of a tease in that there’s a moment for her to go full action-hero yet pulls back to remind us this movie is PG. Christopher Walken’s only addition is to fall down a lot and say “Epic!” Cheech Marin provides passive commentary on young folks. Jane Seymour completes the fourth wheel of the elder ensemble by being little more than a token woman of token gags. But poor Rob Riggle may have gotten the shortest end of the stick. This actor has portrayed too many average dad roles and here he does the same thing with his only highlight being accidentally stumbling on De Niro in the nude and screaming at his exposed phallus.

War is hell and so is The War with Grandpa. It’s bad enough that such a film is yet another nauseating excerise in routine slapstick but all the more vile for trying to make some point about the nature of war itself. That’s too tough a subject to tackle for a film that mostly wants to evoke laughs from people being hit in the nuts and launched into the sky.

One thought on ““The War with Grandpa” Review”