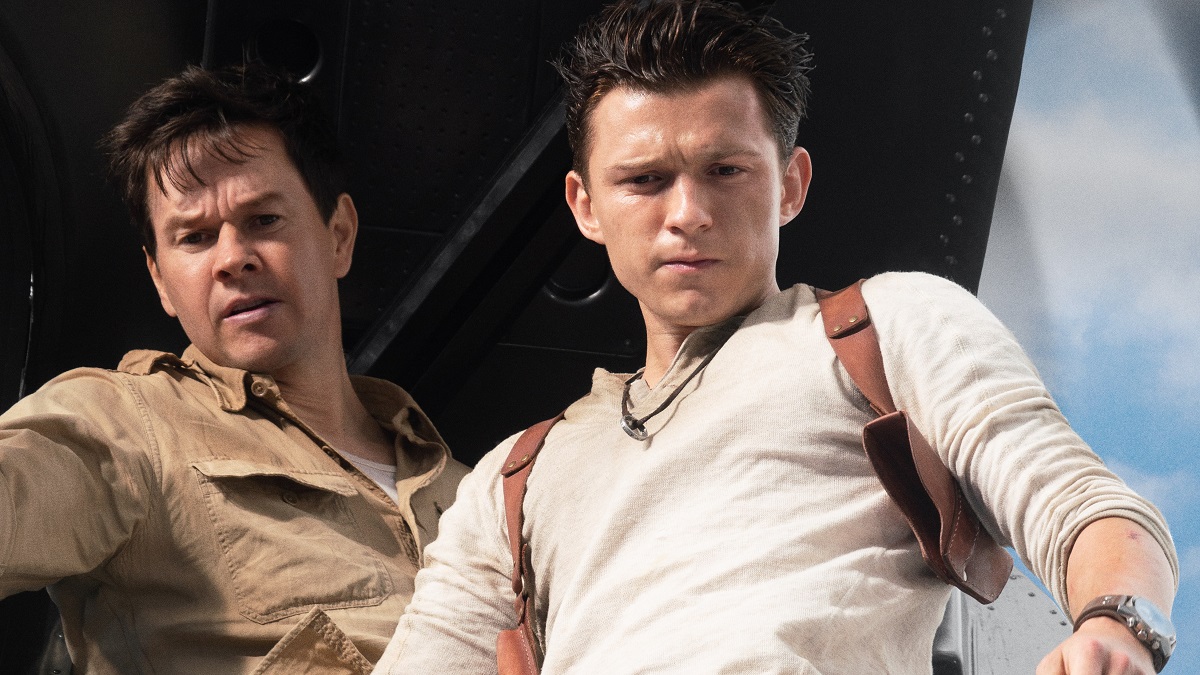 There’s a cameo in Uncharted that feels as though it’s strictly funny for the fans. Nolan North, the voice actor of Nathan Drake from the Uncharted video games, occupies one scene of this movie adaptation. He asks what happened to the character of Nathan Drake (Tom Holland) after he marches onto a beach. Holland tells him that he fell out of a plane and North replies that something similar happened to him. North then gives a look over his shoulder as Holland departs, most likely holding for the laughs and applause at the inclusion of this character that only fans of the game will recognize.

It’s surprising that the film would go this route considering that the very premise of Uncharted is very applicable for most moviegoers without foreknowledge. After all, it’s a globe-trotting treasure-hunting adventure story. Sure, there are some specific character traits and all that sloppy lore that comes with every video game. But on the surface, it’s just your typical Indiana Jones-style adventure, made fun of in the games because it felt like the closest one would get to be that sort of adventurer. And as far as films of this nature go, Uncharted doesn’t do much to set itself apart from the pack.

Consider how neatly constructed the film appears with Holland playing Nathan Drake as a character who is destined for hunting treasures. He grew up as both a troublemaker and lover of history, obsessing over lost artifacts and unsolved mysteries of discovery. It would seem like he’d be perfect for being an explorer but instead ended up as a bartender. Despite this, he’s still a fountain of knowledge that he often dispenses while mixing drinks and swiping jewelry off his customers.

Nathan’s penchant for pilfering attracts the eyes of season fortune hunter Sully (Mark Wahlberg). Nathan doesn’t seem interested in whatever Sully is seeking until he learns it’s about the missing ships of the Magellan expedition. They agree to work together in swiping artifacts for clues and traveling across the globe to find the missing treasure, complete with the classic map animation transitions akin to Indiana Jones.

But Indiana Jones this film is not. I know that sounds harsh but this film plays in that very arena and doesn’t try to hide the influence. Consider a scene where Nathan and Sully are searching for a secret entrance inside a church in Barcelona. Nathan, having grown up in a Catholic boarding school, spots a passing nun. He mutters to himself, “Nuns. Why’d it have to be nuns?” It’s like Raiders of the Lost Ark except Raiders actually set up Indy’s fear of snakes. We don’t get much of Nathan’s fear of nuns in the one scene set at the boarding school. Uncharted seems to be hoping you’ll get the reference. Perhaps there are more nun fears in the games? I haven’t played that much so maybe there is an in-joke about that. Of course, that doesn’t make the joke any better.

The characters all fit so tightly into their archetypes that they struggle for any meaningful charisma. Holland struggles hard to adopt a New York accent but ultimately ends up faltering more than nailing it. I’m not sure why he needed to stress this considering he did just fine playing New Yorker Peter Parker in the Spider-Man movies without pushing an accent. It’s really saying something when Wahlberg is delivering the standout performance. Antonio Banderas plays the typical greedy villain with a history of treasures and this seems like a role that Banderas could sleepwalk through with ease. Sophia Ali plays a love interest who will ultimately betray our heroes when it benefits her most. Tati Gabrielle is at least pretty fun as the ultimate black knight for our heroes to fight but she’s only interesting because she’s not trying to play up for jokes or a charismatic dynamic, considering both are in short supply for this film.

The best that can be said of the film is that action sequences are a lot of fun to watch. Holland pulls off quite the scene when he causes a distraction at a bar, using his skill of mixing drinks to fight off bad guys pursuing them. There are some foot chases on rooftops and daring gunfights amid a cargo plane with an open bay door. There’s also a bit of a visual treat by the time the film gets to its climax of dueling Magellan ships airlifted into the sky. These are great scenes until the momentum is broken by Nathan spouting pirate phrases and saying with a smile “What? I’ve always wanted to do that.”

Uncharted is a video game movie that is not a disaster but just a forgettable adventure flick, sure to be lost in the myriad entries of the genre. Aside from the rather generic adventure title, the lukewarm performances and standard staging make for a rather forgettable experience. The Uncharted games may be a lot of fun to play but they’re only mildly entertaining enough to watch as a film.