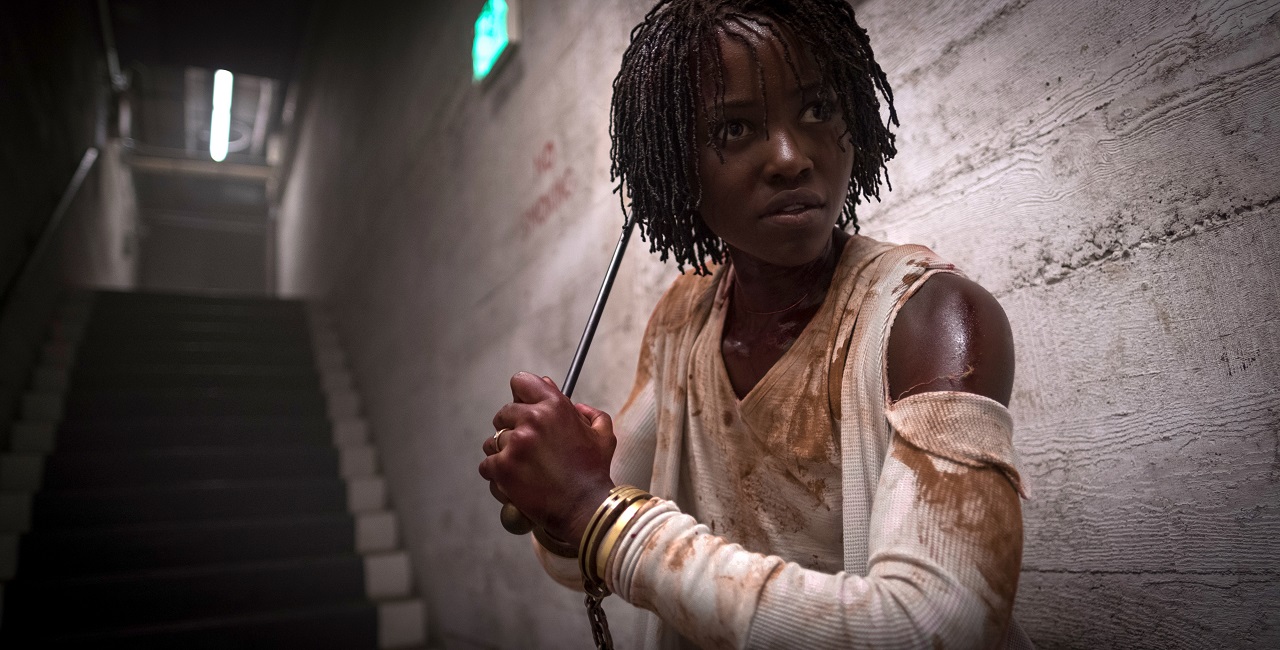 Jordan Peele’s Us serves as another example of how firm a grip the director has on horror. He knows how to tinker with this genre to such a degree that he can craft a picture capable of being a fast-paced slasher, a twisted trip through the surreal, and a layered societal commentary. And it’s such a brilliantly beautiful nightmare that it always holds the eyes, begging to be deciphered for the messages it subtly serves so well.

Lupita Nyong’o stars as Adelaide, a woman with a very disturbing past. Bad memories stick with her when she wandered off at the beach of Santa Cruz and found herself in a dark room, facing a doppelganger of herself. The event leaves her terrified and traumatized but her life seems to go on. She grows up, marries an eccentric husband (Winston Duke), and has two typical children of a phone-obsessed teen daughter (Shahadi Wright Joseph) and a younger son (Evan Alex) with a love of masks and tacky T-shirts. Their family vacation takes them back to Santa Cruz and Adelaide is reasonably shaken, fearing there’s some unresolved evil lurking somewhere around the beach.

Despite the great love of Adelaide’s charming family and trying to put the past behind her, the fear remains. And she’s right to be scared when one night her family is approached by shadowy figures dressed in red. They show up at their door, force their way inside, and the family soon learns the shocking truth of their attackers: they look just like them. But how could this be? And how does this relate to what saw Adelaide?

Of course, being a Jordan Peele production, there’s another lingering question throughout: what does this all mean? Part of what makes Us so engaging is that it never spoon-feeds any of its brilliant spectacle. Adelaide will at one point ask her clone of sorts what she really is and her response is more allegorical than literal. The Bible verse of Jeremiah 11:11 appears several times throughout the film but is never outright stated what it cites. Those hoping for a clearer answer upon looking up this passage may be let down that the meaning is also somewhat aloof to what goes down later. But look closer and you’ll notice a sense of duality throughout the picture where the passage is more intriguing for the joining of duplicates.

While Us certainly has a layered structure, it’s still a genuinely entertaining horror picture more for its unique assembly of familiar thrills. The initial scenario Adelaide finds herself in with her family isn’t an uncommon one, where a vacationing family finds themselves being attacked by killers. But the chase and killings are staged with a traditionally creepy vibe where Peele embraces everything from characters skittering like spiders to a tingly violin for chills.

Another pleasing aspect is Peele’s great use of humor. Most horror films would generally keep the first act a light and kind family romp before all the blood and terror sets in with the second act. This film keeps both tones throughout. The family has just as much great and gleeful chemistry while battling strange killers as they do relaxing at the beach. The consistent comedy proceeds just as well as the very disturbing nature of a twisted horror that still digs deep into the subconscious of what scares us most.

The performances are fun and strong all around, including some fantastic supporting roles by Tim Heidecker and Elisabeth Moss as a seething couple, but it’s ultimately Lupita Nyong’o’s film for pulling off the most powerful role of her career. Filled with fear, love, and great fury, she dominates the screen as the most fascinating of characters, especially when she has the honor of fulfilling Peele’s iconographic shots of eyes big and pink for the frights in front of them. She also has to pull off one heck of a climax which requires astounding staging and coordination.

While Us does make numerous references to the likes of Jaws and Home Alone, in addition to many horror trademarks similar to that of Stanley Kubrick and Brian De Palma, there’s far more to the film than just a love-letter to the greats. This IS one of the greats, presenting a style all its own that treads down the deeper and darker paths of our minds and society. Feeling both detailed and fresh, Us is the type of horror fans of the genre will be talking about and dissecting for ages, both for its astounding assembly and a richly woven message about individuality, nostalgia, and nationalism.