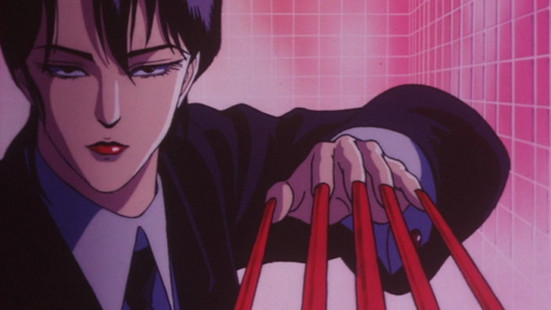 Taki meets a woman at a bar and takes her back to his place. They start having sex and Taki notices something strange going on with the woman’s legs and arms. Her limbs grow longer and pointier as she tries to ensnare Taki into her vagina that has now bore teeth. Luckily for Taki, he’s accustomed to dealing with monsters such as this, grabbing his gun and forcing her out the window. Now in a more spider-like form, she scurries out the window and down the building. Just another dangerous night in Wicked City.

The human world is currently in a secret war with the Black World, another dimension of mutant demons, such as the spider-vagina lady from the opening sequence. A treaty has been held for some time, but it’s becoming tougher to maintain with demons slipping through and hiding out in the human world. Taki is part of the Black Guard, the suited agents in charge of maintaining the covert peace between humans and demons. His latest assignment is one of the most crucial in this fight. He’s ordered to protect Giuseppi Mayart, an elderly mystic essential for negotiating the treaty. Taki’s partner for this mission is a Black Guard agent, Mackie, a fashion model of sorts. Her special demon power: deadly long and retractable fingernails.

As per the anime cliche, the small and wrinkly Mayart is a pervert, less interested in staying in the safe house and more eager to find a prostitute. While Taki and Mackie hold off the violent forces of the Black World, including an assassin that can apparently rip off limbs with his screams, Mayart will ditch them for a bathhouse where he can receive a sexual massage. Of course, his massager isn’t a human, but another Black World assassin that literally tries to absorb Mayart into her body when he gropes her. And if you think that sex is weird, this scene is quickly followed up with Mackie being viciously raped by tentacles, per that cliche as well. Not weird enough? How about Taki being hypnotized into being consumed by a vagina large enough to eat him whole?

All of this craziness makes Wicked City sounds like an atypical exploitive anime with all the expected ingredients of gory violence, weird sex, and tentacles. Surprisingly, however, the anime does have an intriguing premise and neat animation, passed all the shock and awe. The whole idea of there being a dimension of demons in a treaty with our own is a cool idea. While we never see this Black World, we do get to see plenty of that dimension’s monsters with varied and clever designs. It’s no surprise this film was directed by Yoshiaki Kawajiri, the anime director that would go on to direct the equally bombastic Ninja Scroll.

Mackie may seem like a ludicrous Black World agent with her ability to use elongated nails as Wolverine-style claws, but it gives her an elegant edge to being a deadly defender of dimensional democracy. The Black World baddies are all creatively designed, none of them looking the same or simplistic. They can range from fleshy-messes of gruesome teeth and puss as they shed their mortal coils or they could be as common as a prostitute that only shows her teeth behind closed doors.

But it’s ultimately the characters that make Wicked City all the more engrossing. Taki is posed as a weary and cool-headed Black World guard, but not immune from being disgusted or shaken with emotion from the foul creatures he deals with. Mackie is collected and calm, despite making the idiotic mistakes for the villains to rape her constantly. Mayart is a major creep of a pervert, but has a cantankerous and goofy nature that pulls him back from being unlikable. He brings an added dose of levity to the adventure, focused more on having fun than the politics of humans and monsters.

To lift the movie passed being little more than sleazy exploitation and narrowly avoid falling off the cliff into hentai, the direction doesn’t skimp on the cheesiness. The romance that builds between Taki and Makie over the course of the story builds to such a ludicrous finale of marriage and pregnancy that it’s rather sweet for being so corny. After all the grotesqueness of putrid monsters, gory deaths, and rape of all kinds, a happy ending serves as a satisfying chaser for all the craziness, despite how weird it appears. It also helps that the film is allowed to breath at times. During a calm before the storm, Taki and another guard relax at a safe house and share sandwiches over a game of chess. It’s a pleasing bit of ease before all the violence and sex starts up again.

Wicked City is that surreal picture you hope to find late at night on cable; a film that’s willing to go for the graphic adult content, but doesn’t play it up as a totally disgusting insult to your intelligence. The animation is vivid, the characters interesting to follow, the plot relatively weird, and the action is incredibly creative for all its gratuitousness. As far as anime with the cliche of tentacle rape goes, you can’t go much trashier and flashier than this.