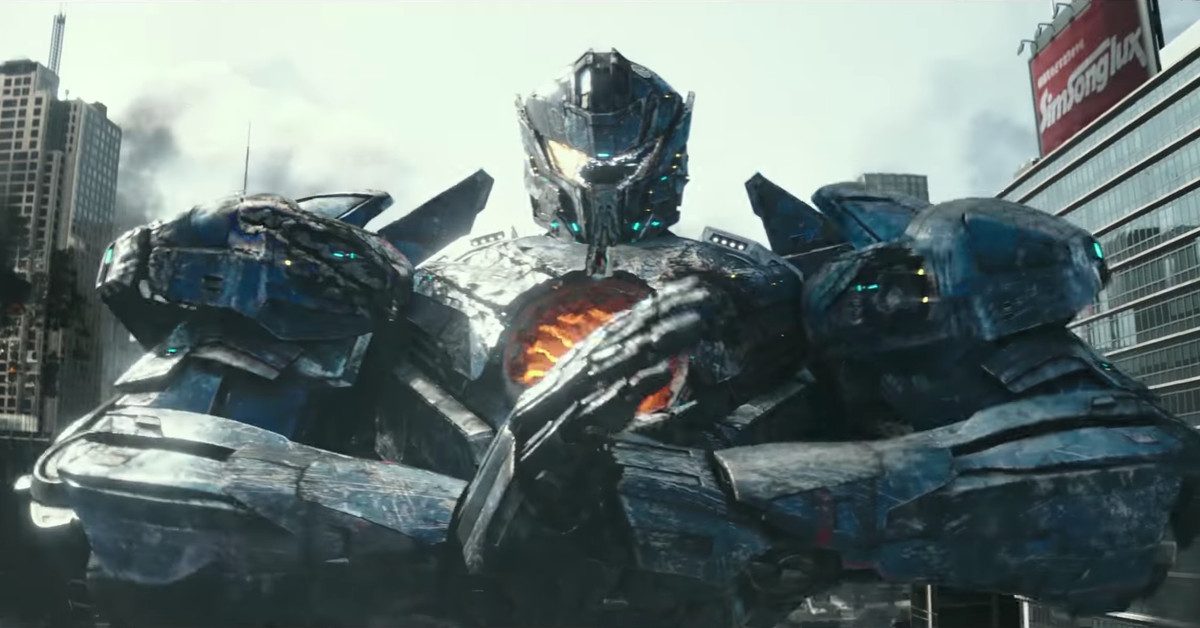 As someone who grew up adoring the giant robot anime of Gundam and Robotech, Pacific Rim made my inner geek explode with joy. Uprising continues to ride that high with a similar story and familiar formula for the first-time director Steven S. DeKnight to slide comfortably into the mecha masterpiece Guillermo del Toro started. Yes, this is very much more of the same, but as someone who dug the tongue-in-cheek silliness and robot-fist-in-monster-jaw action of the previous film, I’m all for a second helping.

A decade has passed since the giant robot Jaegers successfully pushed back the giant monster Kaijus back into the dimensional breach and sealed up the cracks. Now humanity struggles to rebuild itself in a world where resources are scarce enough that Jake Pentecost (John Boyega) will trade you parts of a Jaeger for a box of cereal. He was once a Jaeger pilot of great promise, given that he was the son of the previous film’s Stacker Pentecost, but seems to find more worth in partying and plundering amid the relics of the Kaiju war. After a run-in with the street scrapper Amara (Cailee Spaeny), he’s taken in by the Jaeger program once more as he is needed during their toughest time. It’s not the threat of Kaijus the program has to worry about this time, but a sinister new company that would rather have Jaegers be drone-controlled machines than robots that require at least two pilots. It seems like a fair appeal, considering the mental strain and cost of lives in piloting a Jaeger, but as with any story where machines place humans, we know it won’t end well.

What both hurts and strengthens the film is it grander appeal to world building. The story starts out strong enough with a society that is straining to keep itself afloat with resources, where taking a shower requires credits and something as simple as Siracha sauce looks like a feast. There are also new countermeasures for Kaiju and rogue Jaeger attacks, as with some cities that have better build underground shelters. I guess they learned their lesson after the first film where one Kaiju bore underground to penetrate the safer spots underground. But as the movie goes on, it seems to forget about these aspects as it keeps whipping up new twists and conflicts to keep the action frantically paced. If you found yourself having serious hangups about the first film’s clunky logic behind the Jager’s nuclear reactors, you’ll have a field day with how the Kaijus play into all of this.

A marked improvement over the predecessor, however, is the characters. Boyega finally gets to let his English accent fly in a role where he can be charming, commanding, and hilarious with the subtlest of deliveries. Charlie Day returns as the Kaiju obsessed scientist that can still hold a scene, as is his more mathematical counterpart played by Burn Gorman. It’s almost a shame that they don’t share as many scenes together considering their chemistry. Even the lesser Jaeger pilots that were mostly kicked to the curb in the previous film are given a modicum of opportunity to milk some lines.

And then there is the giant robot action that is the entire draw of the picture and certainly the most pleasing aspect. As if to give a big robotic middle finger to Michael Bay, Uprising features giant robots that are well-designed, well-lit, and well-choreographed at all times so you never feel as though you’re being left out of the excitement that shakes the camera. Every punch, slice, explosion, and ripping out of power core is not only visible but packs that dose of cool that always felt missing from the Transformers movies. Yes, the action essentially boils down to the familiar formula of one Jaeger standing and one Kaiju trying to bring about the end of days. Your level of excitement for these scenes all depends on how much you dig watching gravity guns launch balls of cars and energy sabers slice up monsters.

While the first Pacific Rim had enough mecha thrills to be considered an original homage to mecha anime, Uprising, unfortunately, leads me into proclaiming this film a guilty pleasure. It is certainly not as strong narratively and wraps itself in subplots that nearly crowd out the creativity. But as someone who grew up on mecha anime, a big blockbuster of giant robots fighting giant monsters with a slightly-aware nature to its dumbness just melts my heart with geeky love. Considering the Easter egg inclusion of a shot of a Gundam statue in Tokyo, the director knew exactly who this movie was for.