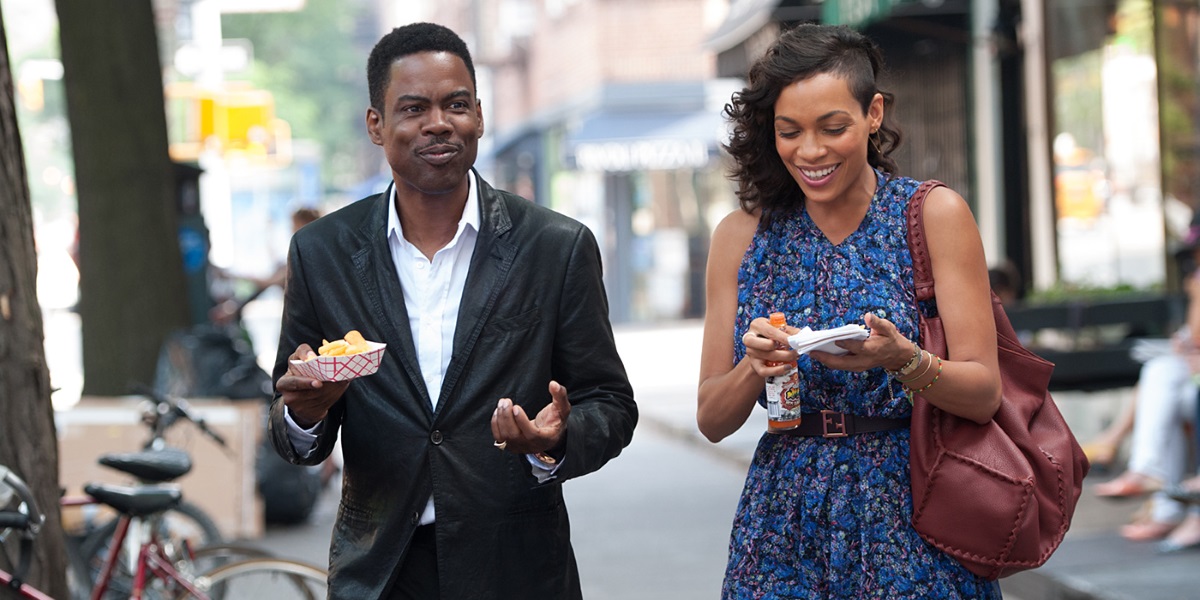 Top Five is the third film Chris Rock has written, directed and starred in. Now at age 40, Rock has crafted a comedy that is a rather personal story. It’s not quite his autobiography picture, but it rings with so many awkward truths and concerns for a comedian who pines for the better days. His character of Andre Allen is a comedian who no longer feels funny as he directly tells some hecklers on the street. And yet everyone seems to want him to be funny as they call him out for his highest-grossing film character which he woefully regrets playing.

There’s a definite comparison between Rock’s role as the zebra Marty in the Madagascar pictures and his Top Five persona’s notable performance as Hammy the cop bear. He probably feels the same aggravation with bystanders shouting “Afro Circus!” as they spout his Hammy catchphrase “It’s Hammy time!” in this movie. The biggest difference being that his Madagascar character doesn’t have a beer named after him (I hope). He desperately tries to distance himself with more serious roles as he plays the lead in a Django Unchained revision of history. But all any of the radio interviewers seem to want to talk about is when there will be a Hammy the Bear 4. He cares so little for these interviews he actually plays video games while delivering one over the phone.

But then New York Times reporter Chelsea Brown (Rosario Dawson) manages to be the most honest person he’s met. After some squabbling about their interview, they soon hit it off big with true stories of their similar paths. Both of them have been alcoholics and have some stories to tell about their experiences. The sex they’ve had has been strange and awkward which they don’t feel as embarrassed sharing with one another. These two are destined for one another, but still have a few more disclosures to get out of their system before they can make that leap. Namely, Andre has to find a way to deal with his staged marriage to a power-hungry celebrity.

Though very meta in how the story mirrors Rock’s feelings about stardom, the movie is still very funny in its own right for hitting several notes. When Andre hangs around a crowded room of his family, they crack all sorts of rips on each other about their shortcomings that they all seem to take in stride. When Andre talks with Chelsea about his past, he leaves in every nasty detail about his most awkward parties. There’s even some dropping of the curtain as when Jerry Seinfeld, Adam Sandler and Whoopi Goldberg appear as themselves to give Andre some marriage advice. The best they can muster is don’t get caught cheating and have the wife sign a prenup.

Speaking of such stars, there are plenty of surprise cameos that include Kevin Hart, JB Smoove and Tracy Morgan amid many more. All of them get their moments to shine without feeling too out-of-place for the story. Though I have to admit one of the most hilarious moments was watching DMX try to sing outside his comfort zone in a horribly off-key manner. But the pleasing cap to the film is seeing Chris Rock finally get back on a stage and perform some stand-up comedy. He certainly hasn’t lost his touch as a thought-provoking and edgy comedian who pushes buttons and makes you laugh. If there were any doubt that Chris Rock is losing his true sense of humor that made him an icon of Saturday Night Life and the stand-up circuit, Top Five is proof that he is still alive and well.

Top Five is some of Chris Rock’s best work in a long time, due in part to writing what he knows best: himself. It harkens back to a sense of classic Chris with the type of comedy he should be doing more of. If you miss that version that was buried after years of Madagascar sequels and Adam Sandler romps, this is the movie to renew your faith in the comedian.