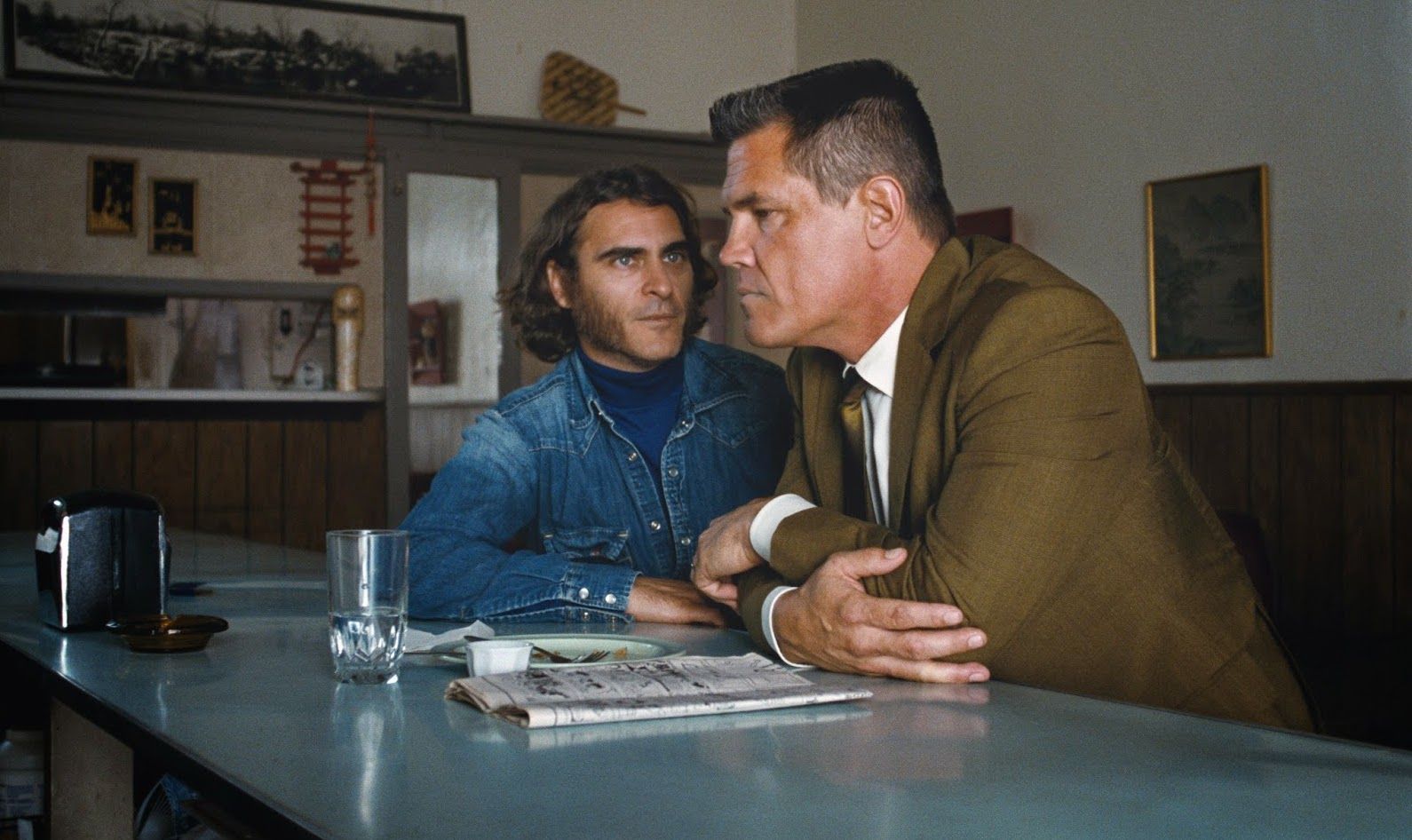 Inherent Vice is more of a ride than a story. It stages far too many characters, plot lines and events into a messy stew and dares you to keep up. The film proceeds at a stoner’s pace fitting the hippie protagonist’s mindset in 1970’s Los Angeles. The story continues to build and build, layer upon layer like a topping tower of excess. What exactly is it about? It starts off with a detective trying to stop a wife and lover from conning her husband out of her money by sending him to the nut house. Then it twists into a conspiracy involving neo-nazis. Then a drug boat is thrown into the mix. Then a crazy cult centered around an actor becomes yet another ingredient. And on it grows like an out of control kudzu in all directions.

It’s a film that’s easier to talk about for its characters than its story. Seen as more of an anthology of dialogue-driven scenes, each conversation presents some quality actors given plenty of material to play with. Joaquin Phoenix is in top form as the tripped-out private investigator Doc, stumbling around Los Angeles in his mutton chops and dirty feet. He relies on info and strange companionship from Josh Brolin as Bigfoot, a detective/Adam-12 starring character with a weird obsession for chocolate bananas and Japanese-made pancakes. Martin Short is a riot as a perverted dentist/drug dealer. And Owen Wilson plays an undercover agent with who seems just as lost and confused as Doc in this mess of a story.

But just what is this film about? Perhaps its stoner atmosphere of a stoner P.I. is a script best diagnosed by those of similar mindsets. The dialogue is kept lucidly vague and overly decadent to the point where it almost requires a hippie dictionary to translate. It’s also rattled off at a pace fast enough to just barely keep up with the ever-changing story. It felt like a slightly more grounded version of Roger Corman’s The Trip in which Peter Fonda goes on a crazy drug-induced journey through the city. But while Fonda’s trip was more random and weird for the sake of weird, there’s a strange method to the madness of Phoenix’s tracking of leads. I’m still not too sure what it was, but the original author Thomas Pynchon certainly dares us to find out what it is through some unique characters.

Director Paul Thomas Anderson does little to glue together this disassembled jigsaw puzzle of a 1970’s caper/romance/drama/whatever Pynchon intended. He merely paints the pieces with an old-fashioned 35mm finish and a stylish palette of the 70’s era. Much like films in the same presentation as The Big Lebowski, Inherent Vice is beautiful to look at, hilarious to follow, strange to witness and maddening to comprehend. At some point in the film, you’ll just give up trying to follow the multiple plot lines and just bask in the charisma of its characters. It certainly makes the film more enjoyable, but at 148 minutes, you’ll start to miss your brain being on to engage in a story.

Inherent Vice is just a wicked mess of psychedelic ramblings strange enough to make Hunter S. Thompson’s work seem mainstream. It takes perhaps too long of a drag the way it keeps the freeform plot fluctuating for a staggering 148 minutes, but there’s enough balances of weird dialogue scenes that it’s never entirely boring. This is certainly not going to be everybody’s cup of tea considering Paul Thomas Anderson might’ve slipped too much trippy into this story/ride. But I was more than content for it being so loose with its story and fresh with its characters. If you can find humor in Martin Short freaking out in a car with drugs or Josh Brolin screaming in Japanese for pancakes, you’re on safe ground with this movie.