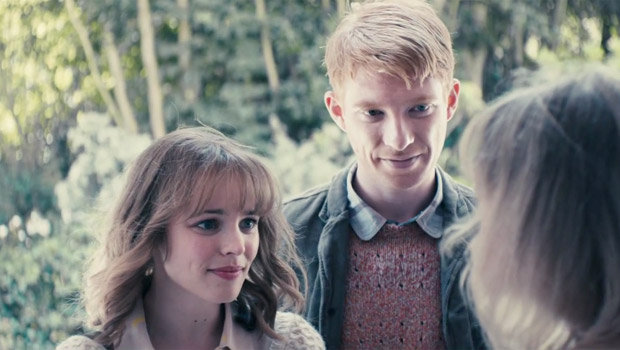 Time travel isn’t a science fiction element exclusive to the genre that birthed it. If I’ve learned anything from the Back to the Future trilogy, it’s that the ability to manipulate the past and future can spawn many different stories. About Time does just that: it takes a character with the ability to change the past and has him use his powers to find the perfect woman romantic comedy style.

Right off the bat, I had serious doubts about this story. I’ve been burned before with this concept as with the incredibly boring The Time Traveler’s Wife and the predictably routine Click. Luckily, this was a movie in the hands of Richard Curtis (Love Actually). And while Curtis doesn’t really think through the whole time travel angle, he does know how to craft an enjoyable rom-com.

When Nick has finally come of age to move out of his parents lush home, his dad reveals that the men of the family have the amazing ability to turn back time by simply thinking about a point in time. He tests this out by going into the closet, thinking about the New Years party he was at last night and ends up back at that very point in time. Every element recurs unless of course Nick desires to change it. This allows him to craft the perfect life where just about every mistake he makes with the girl he desires most can be averted. Every line can be a gem, every kiss can be the best and every move will be perfect. But there’s always a catch when it comes to messing with time and Nick soon learns the consequences and how he can’t exactly save everyone.

Though the film’s main goal is to present a charming romantic comedy involving time travel, it also has a lot to do with the relationship between Nick and his father. The two of them, sharing the same ability, chat a lot about what good can come of this power and how best to use it. You really get a sense of more or less the reality of these powers as Nick’s father covers what he’s spent most of his life achieving and regretting with changing time. You can use this power to read every book in the world twice or become a famous actor several times over, but none of it beats a date with your favorite girl or a game of ping pong with your dad.

As a warning, don’t go in expecting a satisfying portrayal of time travel. The whole concept of time travel itself doesn’t make much sense in cinema to begin with, but the inconsistencies are a little more visible here. The rules of Nick and has dad’s abilities are played very loose as you can apparently take others with you as you travel to the past. The implied paradoxes of adding another character for the journey not to mention that Nick at one point uses his power to travel back to his childhood would make one’s head explode. Take a cue from the Austin Powers films and don’t overanalyze it too much.

If you’re willing to go along with suspension of disbelief, About Time is a very pleasing romance romp with a unique concept. There are plenty of likable characters, genuine comedy and real emotion to fuel the entire redoing a timeline concept. As someone who wasn’t fond of the concept or romantic comedies in general, I was very surprised at how entertained I was by the whole scenario. For being Richard Curtis’ final film, he certainly turns in an astonishingly heartwarming story that touches so many bases about life, love and family. It’s not exactly a masterpiece of the genre, but the movie is irresistible enough to bring a smile to even the most jaded audience.